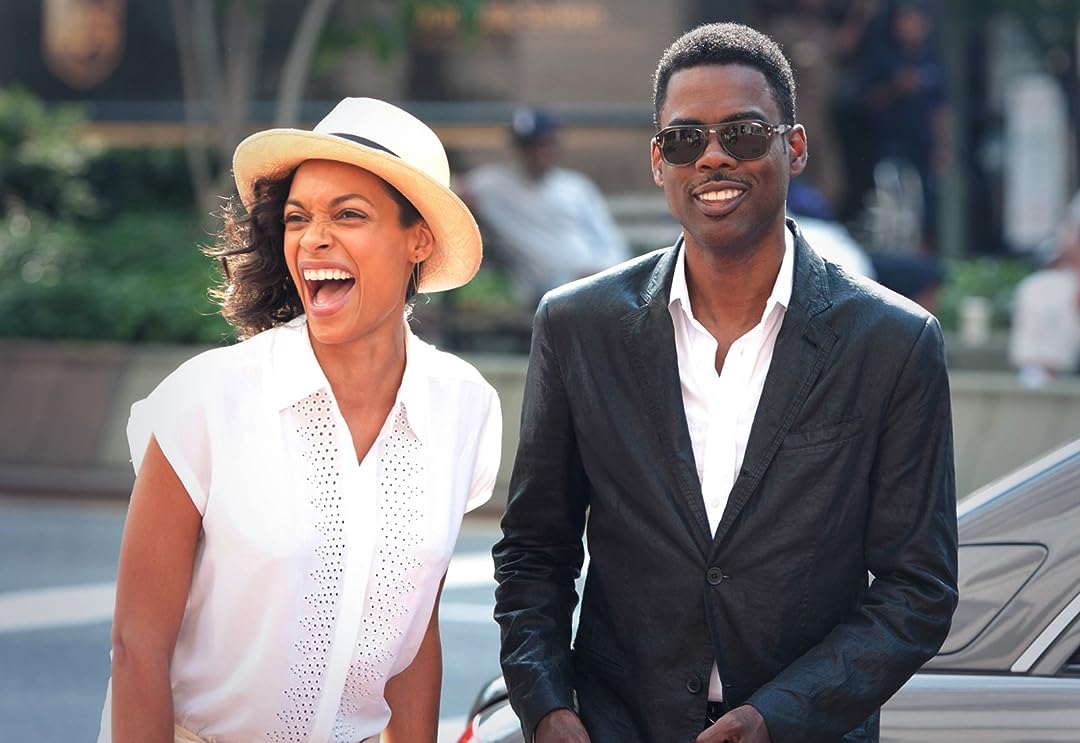 (1,819)
6.41 h 41 min2016R
A comedian tries to make it as a serious actor when his reality television star fiancée talks him into broadcasting their wedding on her television show.

Included with BET+ on Amazon for $9.99/month after trial

Watch with BET+
Start your 7-day free trial
Add to
Watchlist
By ordering or viewing, you agree to our Terms. Sold by Amazon.com Services LLC.
Write review

joel wingReviewed in the United States on September 27, 2019
4.0 out of 5 stars
Romantic comedy that also covers the problems of celebrity
Verified purchase
Top Five is part romantic comedy part commentary on Hollywood. The dual themes seemed to confuse a lot of people, and not appeal to many others. I fell in love with it when I first saw it in the theater.

The movie featured Chris Rock as Andre Allen who started off as a shooting star comedian who then predictably went into a series of bad comedy movies. The fame and attention eventually got to him, and he became an alcoholic. Now he’s trying to be a new man and chart his own course being a serious actor staring in Uprize, a story about the Haitian Revolution. He was still trapped in his old persona however having to do a live marriage with reality star Erica Long played by Gabrielle Union. Into this mix steps Chelsea Brown (Rosia Dawson) a New York Times reporter who wants to do a one on one interview. Allen is initially standoffish and reluctant, but it turns into the heart of the film as the two take a trip through New York. Along the way, Andre and Chelsea form a relationship but all the trappings of celebrity get in the way.

There are a bunch of great cameos throughout the film as well. J.B. Smoove is Andre’s driver and is always trying to pick up on big women. Kevin Hart is Andre’s agent and stops talking to him to go see Ben Stiller. Cedric the Entertainer is a Houston promoter that takes over Andre’s afterparty. Ben Vereen is Andre’s estranged dad. When the two run into each other all Vereen does it make jokes about Andre’s stardom only to turn around and ask for some money. Tracy Morgan, Leslie Jones, Jay Pharoah, and Michael Che are Andre’s old friends from the hood. That leads to where the title of the film comes from when they each name their Top 5 rappers of all time. Towards the end, Andre goes to his bachelor party and talks with Jerry Seinfeld, Whoopi Goldberg, and Adam Sandler about marriage. They warn him not to cheat, stay loyal, and don’t confess to anything. DMX however steals the show when Andre runs into him in jail and he explains how he wants to start a singing career and then belts out a tune.

I understand how the two themes could throw people off about what exactly Top Five is about. For me it worked perfectly.
C

chelseawindReviewed in the United States on October 28, 2021
5.0 out of 5 stars
Chris "I'm Chris Rock" Rock nails it
Verified purchase
You have to give Chris Rock credit. He has worked and worked at acting and directing over decades of films, and his dedication to the craft is so obvious.
I remember he had this weird eye twitch in the beginning. It was very clear that he was uncomfortable with the camera. He was really appealing in other ways, and such a brilliant standup, and he's eradicated it now, and just nailhis film.
It's just a pleasure to see. He works in some barbed observations about the showbiz industry. The dialogue is smart and funny. Rosario Dawson also kills it. And the cameos are mind blowing. Whoopi, Seinfeld, Taraji. superb.
One person found this helpful

RockyReviewed in the United States on August 2, 2021
5.0 out of 5 stars
Great job!
Verified purchase
I'm just seeing this movie in 2021, and it's really only because when DMX passed, his scene went viral and had me laughing so hard at that one clip, I had to see the entire movie. I actually thought it was a good, and really wish they continued the story. I love the Cinderella spin, but I especially loved the credits at the end of the film. Very proud of my Brothers for doing this one. Jay, Yeezy, Rock and Quest Love...y'all gotta come together again. :)
One person found this helpful

S. VecchioReviewed in the United States on March 23, 2015
4.0 out of 5 stars
Gritty, With Some Comedy, But I Would Bill it as a Drama Pretty Darn Gutsy, and Good Job at First Try
Verified purchase
I was very curious to see how Rock would do, writing and directing a dramatic piece, AND play himself, basically, letting the audience see the not-so-appealing side of the stand-up comic. It was a considerable risk, and I think it shows guts, and he did a very good job.

I think his stand-up is brilliant, and in my opinion, he is the best. I haven't seen anybody mix blue comedy, weave in unmatched social commentary, and reveal so much of himself, and with such intensity.

I was disappointed in the roles he took when he started getting into feature films, but you take what you can get.

I was surprised that his acting was pretty bad, when a lot of stand-up guys can translate their timing etc, into pretty good film performances.

After watching this movie, I can see he needed something he could sink his teeth into, and get in the zone. like when he's on stage.

If he is able to keep doing films, I can see him developing into a good actor.

Adam Sandler has made a fortune /with his formula movies, that he also produces, playing the same, sweet, affable guy. He has the personality to pull that character off. Rock just doesn't have it to NOT put himself into a part. My sense is, if it can't feel real for him, he just sort of freezes, and becomes kind of robotic.

Sandler did a film a few years ago, "Funny People", produced and directed by Judd Apatow, and he also played a very UNlikeable stand up comic. It was a very good movie, and Sandler was awesome, but I've never checked out reviews to see how well his other fans responded to him in such a different light.

Probably would not have watched "Top Five" if it wasn't Rock's first foray. It was a good attempt, and I am such a fan, I was interested to see how he did, but I did think it needed quite a bit of work in tightening up the script, etc.
3 people found this helpful

MarcReviewed in the United States on July 15, 2016
3.0 out of 5 stars
Stick with Stand Up
Verified purchase
Most comedians, i.e., Jim Carrey, Michael Keaton, Jerry Seinfeld, etc., have done stand up, and have become very successful in their movie, or television careers. It's obvious that in stand up, you have to think on your feet and improvise; there's no getting around it, you have to be sharp.

Chris Rock's performance in TOP FIVE, is poor at best. Who knows, maybe he started to late in his career to get involved in acting, and movies. Nonetheless, I have always found Rock's stand up performances, funny, and very entertaining. Regretfully, he might want to stick with just that,......Stand Up.
One person found this helpful

J. HenryReviewed in the United States on January 2, 2016
5.0 out of 5 stars
Please at least pretend to read this Playboy for the articles
Verified purchase
Excessively negative reviews of this movie miss the point. Comedy is good when it makes you laugh, but it's only great when it makes you think!

No doubt—this movie is made to entertain, and Rock nails that goal with the variety-show-style cameos alone. In fact, he knocks it out of the park with a handful of hysterically raunchy scenes credibly tied together by multiple, dynamic exchanges between him and Dawson. Their observations are honest and their commentary is drinking-with-close-friends funny.

But the harsh critiques miss an even more important bottom line—this movie has substance. It's not a stand-up routine or a simple platform for the comic, and it's not supposed to be. It is an insightful look at people who hurt themselves and others by putting human beings on pedestals and by forgetting that even professional entertainers are people too.

This movie is ripe for great "dinner after" conversation, and for those who missed the "makes you think" part, please at least pretend to read this Playboy for the articles.
11 people found this helpful

HBB47Reviewed in the United States on May 30, 2021
3.0 out of 5 stars
Not funny
Verified purchase
It was an interesting story, but the reason I watched it was because it made a top 100 funny movie list. The only time I laughed was when Chris Rock was doing stand up. The “kill all the white people” line was disturbing. No one should celebrate the death of someone. That’s just macabre.

Janie JunebugReviewed in the United States on June 5, 2016
4.0 out of 5 stars
TOP FIVE COULD HAVE BEEN GREAT BUT DOESN'T QUITE MAKE IT
Verified purchase
Unfortunately, Top Five is filled with depictions of drug use and profane language. Chris Rock and Rosario Dawson give nice performances in what can be considered a Cinderella story of sorts, along with a comeback by an entertainer who thinks he can't be funny unless he's drunk or high. The profanity became gratuitous and meaningless, which is a shame because it would have been more effective if suddenly used in a character's stand up routine. The sequence with Cedric the Entertainer is grotesque and goes further than necessary to make its point. I decided the movie was worth watching during the last five minutes. Kudos to Christ Rock for writing, directing, and starring.
See all reviews
Back to top
Get to Know Us
Make Money with Us
Amazon Payment Products
Let Us Help You
EnglishChoose a language for shopping. United StatesChoose a country/region for shopping.
© 1996-2021, Amazon.com, Inc. or its affiliates