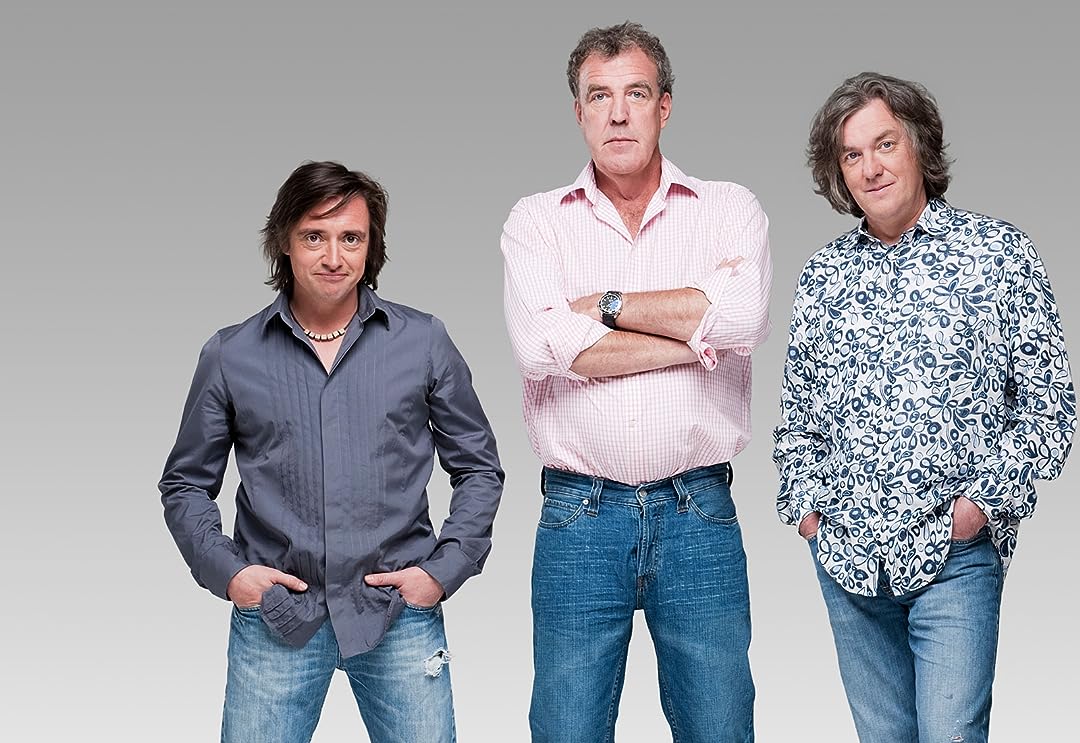 (726)
8.62013TV-14
Season 19 sees Jeremy Clarkson, Richard Hammond and James May use the Aston Martin Vanquish, SRT Viper and Lexus LFA for an American road trip that takes in Las Vegas and Los Angeles before ending with a run to the Mexican border. The trio also create a car designed for old people, carry out one of Top Gear's thorough road tests on the new Kia Cee'd and race a Shelby Mustang GT500 against a train.

Watch with Motortrend
Start your subscription
Add to
Watchlist
By ordering or viewing, you agree to our Terms. Sold by Amazon.com Services LLC.
Write review

RyanReviewed in the United States on November 17, 2017
5.0 out of 5 stars
Another great season from Top Gear UK
Verified purchase
I will preface this by saying that I'm an American.

- I've see some of the US series, and why bother? It's rubbish
- This is probably the most re-watched series I have, up there with Arrested Development, this is great time and time again

As for this season, I have to say There are 3 really great episodes -

1) ep 5 with the car for pensioners - love it
2) The Africa special another great Top Gear adventure, love it!

Casey A. HenryReviewed in the United States on March 9, 2013
5.0 out of 5 stars
Top Gear Hits Its Stride Again
Verified purchase
While seasons 17 and 18 had their moments, I had begun to feel that Top Gear was losing its lustre. It was still a great show, but I wondered if they would ever be able to top great past segments like season 10's amphibious crossing of the English Channel and RV touring car race or season 12's "serious" road test of the Ford Fiesta. I'm happy to say that Top Gear's mojo is officially back in season 19. The segment featuring Hammond and Clarkson's car for old people is both laugh-out-loud hilarious and oddly touching, Clarkson's deadpan review of the new Cee'd is reminiscent of that great Fiesta test, and Kia Rugby is brilliant--in addition to looking like great fun. Welcome back, Top Gear!

Bruce N. LiebReviewed in the United States on May 30, 2013
5.0 out of 5 stars
Top Gear UK is the greatest show on television
Verified purchase
If I were banished to live on an island or sent off to prison for the rest of my life and could only choose one television series to watch until the end of my days, Top Gear UK, would be that show. Top Gear UK, is more than a television show about super cars and all things automotive, it is a show about three friends and their common bond. From their challenges to their Christmas specials, each episode is intriguing and enjoyable to watch. What many may not know is that Top Gear UK is the most popular television show on the planet with billions of viewers world wide. There is a reason for this. Season 19 will not disappoint Top Gear fans, from the "Old Peoples Car", to the "Africa Special", this season delivers and leaves me anxiously awaiting Season 20.
One person found this helpful

John S.Reviewed in the United States on September 5, 2013
5.0 out of 5 stars
Honest humorous way of reviewing cars
Verified purchase
I know these guys get flack for always driving cars most people cannot afford. But actually how much can you talk about a bland $20000 sedan? When I was a kid I thought about cars I probably would never own. But its always fun to see what they can do. I don't watch Top Gear to decide which $100,000 car I want. I watch them to see if they think its worth it. I especially like their quests to explore roads not so traveled. Or destinations not really on a map. I have watched them so long now, I even get the British language now!
One person found this helpful

Bargain HunterReviewed in the United States on April 19, 2013
5.0 out of 5 stars
Soooo funny!
Verified purchase
I'll honestly admit that this program shouldn't appeal to me as a woman since its so "gearhead" yet it does. Watching them insult each other nearly the entire program is just funny. You'd think one or the other would have enough and quit. Here's the hook: they pull the auduence in on the gag. I just love the program and look forward to each episode. My favorite host is James May. I wish the season was longer. Six or so episodes is just not enough.

Allan VanugaReviewed in the United States on April 15, 2021
5.0 out of 5 stars
it was good
Verified purchase
it was good

Michael J. EdelmanReviewed in the United States on March 25, 2013
4.0 out of 5 stars
Silly and entertaining as ever
Verified purchase
The usual good mix of our three aging adolescents clowning around in expensive cars, offending every possible group, and providing a little bit of actual useful car info. Jeremy and James show how you can play rugby with cars and trash a legendary pitch. Lewis Hamilton returns to be the F1 star in a reasonably priced car and is as impressive in the current budget sedan as he was in the last. All in all an hour of fun that will please any Top Gear fan.

elan goldsteinReviewed in the United States on March 26, 2021
5.0 out of 5 stars
Great!
Verified purchase
Great!
See all reviews
Back to top
Get to Know Us
Make Money with Us
Amazon Payment Products
Let Us Help You
EnglishChoose a language for shopping. United StatesChoose a country/region for shopping.
© 1996-2021, Amazon.com, Inc. or its affiliates