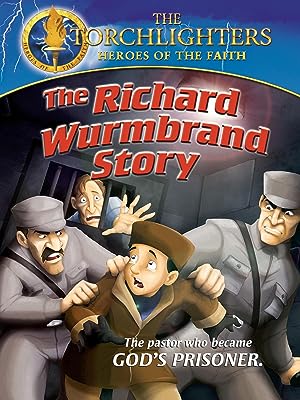 (31)
9.336min200913+
This animated favorite for children tells the true story of Richard Wurmbrand, imprisoned for his faith in Communist Romania.

Ky. Col.Reviewed in the United States on December 10, 2012
5.0 out of 5 stars
Very Well Done
Verified purchase
The Torchlighters series has done an admirable and in my opinion surprisingly high quality job of adapting the stories of Christian heroes into cartoons for younger viewers (although adults such as myself can also find them enjoyable).

This particular volume covers the story of Richard Wurmbrand, a Rumanian pastor imprisoned by the Communist government for his outspoken Christian beliefs. He later moved to the United States and founded the Voice of the Martyrs, a charity organization which assists persecuted believers around the globe. I have read several of Wurmbrand's books which can be quite graphic in their descriptions of persectuion that he and others endured. Could his story be made appropriate for children without losing the intensity of its emotional and spiritual impact? This film answered my question as yes.

The animation is well done although the Gladys Alward Torchlighters DVD may have been even better in that regard. The musical score is nicely done and the story itself is inspiring. In particular I like the scene in which Wurmbrand stands up for Christ at a religious gathering organized by the government (this was a real incident in his life). The persecution scenes are handled well and are age appropriate (it is clear Wurmbrand is tortured without actually showing very much; more mature audiences can read his books to find out just how cruel the Rumanian secret police actually were). The DVD includes several special features including a documentary which interviews Wurmbrand's son. The DVD has English and Spanish languages along with English, Spanish, and Rumanian subtitles. I highly recommend it.

I also recommend several other of the Torchlighter DVDs (I have not seen all of the series so I will only note those episodes I have seen).

Perpetua--Roman martyr (excellent; perhaps the most emotional one of the series I have watched)

Jim Elliot--Missionary martyred in Equador in 1956; known from the book "Through Gates of Splendor" written by his widow (excellent)

MartinReviewed in the United States on June 20, 2012
5.0 out of 5 stars
Historical Truth For All Ages
Verified purchase
Most Christians seem sadly lacking in church history knowledge. This Torchlighter series is great to introduce our children (and adults) to some of the men and women greatly used by God. Richard Wurmbrand died only recently--in 2001, yet his life was one of courage, persecution, and dedication to God. This Romanian pastor was put in prison for daring to speak out against the government trying to force its citizens to accept their beliefs (sound familiar today in America?). In and out of prison, Mr. Wurmbrand continued to preach the truth of God's word. It would be good for all of us to learn more about those who suffered for the same beliefs to which we casually adhere. May we learn from Richard Wurmbrand and hide God's word in our hearts, ready to live and die for the honor and privilege of following Jesus.

Juana MirandaReviewed in the United States on July 4, 2018
5.0 out of 5 stars
Great story! I strongly recommend!
Verified purchase
I’ve seen most if not all of the torchlighter movies. This is one of my favorite ones. The story is very motivational and inspiring. I strongly recommend this DVD you’ll enjoy it as well as your kids.,

C. CarrascosaReviewed in the United States on February 2, 2013
5.0 out of 5 stars
Excellent Testimonial for children
Verified purchase
We have several of Torchlighter's other dvds. We like them because they present children with the stories of true 'hero's'.
Each dvd aslo has a documentary background on the story. What a great resource. Every time I watch one of these with my children I am reminded at how faithful God is even to those who have suffered and lost their lives. What a great source of encouragement and history.

I also feel that these are well made.
One person found this helpful

QuiverblessedReviewed in the United States on September 19, 2015
5.0 out of 5 stars
Wonderful movies all of them!!!!
Verified purchase
My children have adored these movies. They have learned so much and been so moved by the lives of these great Herod of the faith. It you want your children to not just sit and watch mindless tv and be enlightened and taught then these are fantastic!!!!

JemReviewed in the United States on April 13, 2013
5.0 out of 5 stars
Great series
Verified purchase
I love this series and how they add a documentary at the end to educate us on those who lived for Jesus. The Richard Wurmbrand story is a wonderful part of the series and is a great way to learn about the man who began The Voice of the Martyrs.

Juan G.Reviewed in the United States on November 2, 2013
5.0 out of 5 stars
Very encouraging movie
Verified purchase
This movie helps encourage children to understand what is real Christianity it gives examples of people who gave there lives and heart for Our Lord Jesus Christ.
One person found this helpful

jgcReviewed in the United States on January 27, 2015
5.0 out of 5 stars
Outstanding
Verified purchase
This is an outstanding video that will teach your kids and adults what a true follower of Christ is like. Plus the CD rom stuff that comes with it is great!
See all reviews
Back to top
Get to Know Us
Make Money with Us
Amazon Payment Products
Let Us Help You
EnglishChoose a language for shopping. United StatesChoose a country/region for shopping.
© 1996-2021, Amazon.com, Inc. or its affiliates