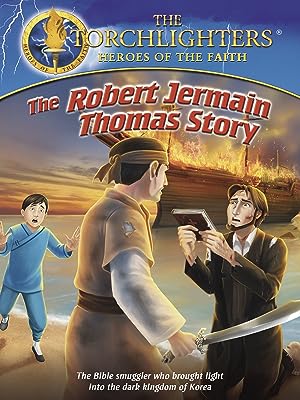 (55)
34min2015ALL
Young Robert Jermain Thomas is a promising Welsh minister with a gift for new languages. For Robert, there is no doubt God wants him to use his abilities to bring the Gospel of Jesus to the Far East. But when he suffers tragedy in China, Robert loses direction and hope. That is, until he meets two Christian fishermen from the "Hermit Kingdom" of Korea who want to know more.

AETReviewed in the United States on February 29, 2016
5.0 out of 5 stars
Very well done! Great story and bit of history come to life
Verified purchase
I have heard of many different missionaries to China, but this was the first I had heard of Robert Jermain Thomas. The story was told from the perspective of one of his converts, and did a great job giving lots of little details about his life and work without getting bogged down in them.
The movie was animated and very interesting, even for adults. After the movie, there was a little section (more for the grown-ups) showing real pictures of Thomas and some of his Chinese converts and telling what happened after the ending shown in the movie.
Well done. Great for people of all ages, though parents of children under FOUR would do well to watch it with their kids as some of the thematic elements can be a bit scary (some people are executed, you don't actually see the deed done, but my 3 year old still picked up on the scary music).

Amazon CustomerReviewed in the United States on December 18, 2016
5.0 out of 5 stars
Better than Disney
Verified purchase
My kids love these. We have the whole set on DVD. Disney produces bad role models for children. Whether its Timberlake, lohan, cyrus, or spears. These hero's of the faith are who I want my children to learn about and imitate. Jesus is Lord and His kingdom is coming.
2 people found this helpful

JReviewed in the United States on January 8, 2017
5.0 out of 5 stars
Inspiring and must see
Verified purchase
Everyone should watch these episodes. These true life histories will build your faith and trust in God while asking challenging questions to the viewer. This one is very inspiring to me, showing God's soveriegn hand in the midst of man's doings.
One person found this helpful

123454321Reviewed in the United States on June 9, 2017
4.0 out of 5 stars
It's good.
Verified purchase
It's good. I don't know why the didn't stick to the true story. The real story is so much better and far more believable.
One person found this helpful

mlcreatureReviewed in the United States on April 16, 2017
5.0 out of 5 stars
Our favorite, re: North Korea
Verified purchase
Maybe the most powerful of all the Torchlighters. It's definitely our favorite and we own them all. If you want to know more about the history of the gospel in North Korea, this is great.

Leslie JerdonReviewed in the United States on January 26, 2016
5.0 out of 5 stars
Teach Your Children and Be Inspired
Verified purchase
You cannot go wrong with this series!!! If you are looking to teach your children about living as a Christian and what it really looks like this series is for you. The men and women featured were obedient to God, loved Him, shared Him with the world, and were faithful even into death.
One person found this helpful

V. CampbellReviewed in the United States on November 15, 2016
5.0 out of 5 stars
Great for my Grand Children.
Verified purchase
This is Great for children and they are learning about Bible subjects at the same time.