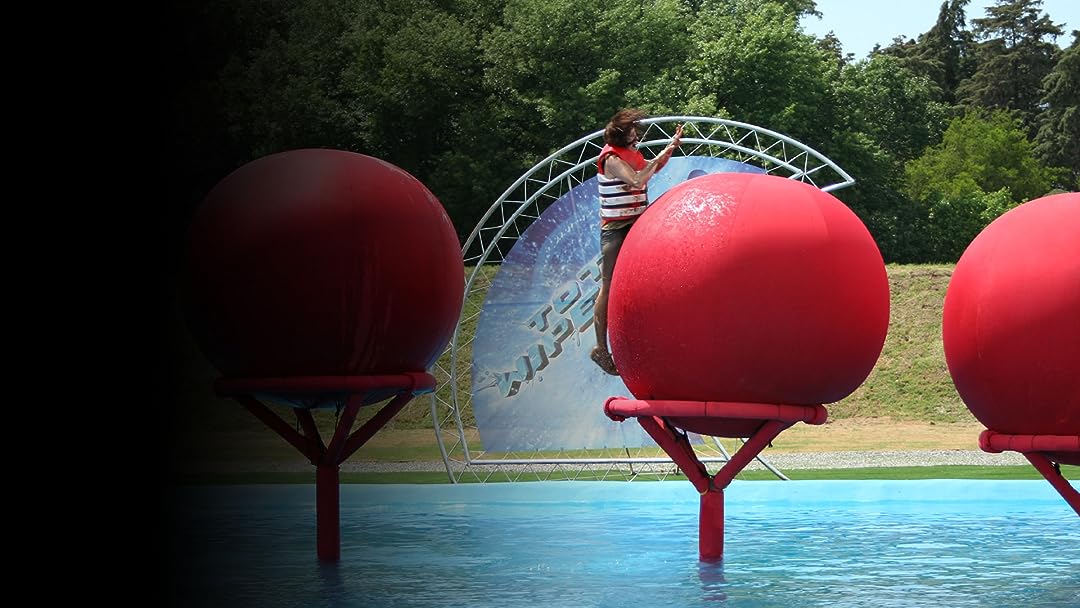 (19)
2009X-RayALL
Total Wipeout, presented by Richard Hammond and Amanda Byram, shows a competition between twenty contestants on one of television's most extreme obstacle courses in the hope of winning 10,000 pounds. This action-packed family entertainment show sees contestants compete in the world's largest and most extreme obstacle course, but in the end, only one contestant can win. Everyone else will Wipeout!

bootsie ann shoesieReviewed in the United States on July 9, 2018
5.0 out of 5 stars
guilty pleasure
the most guilty of pleasures! I notice that they had to hold these wipeouts far far from home, as no other country would possibly not host them! Sad for anyone getting hurt, as I'm sure they are, but still fairly funny
7 people found this helpful

Basically the same review as the other season.

This show is based on watching contestants fail. That's it, low brow humor. Sure, there's a competition and a prize so unwitting players will throw themselves into the various challenges, resulting in spectacular fails. But the course is designed so contestants depend heavily on luck. Traps operate randomly. Players can't watch other contestants. There's no practise runs. Challenges/traps make no allowance for the size of contestants.

One will notice the Big Red Balls are consistently featured. This is the most spectacular fail. Although challenges and traps change from show to show. The Big Red Balls always follow the Sucker Punch; a challenge almost impossible to cross coating players with mud so they'll be slippery on the Big Red Balls. Everything is well padded so we don't have to feel guilty when we laugh.

The show is filmed and edited with voiceover so we only see highlights of individual performances. Contestants are encouraged to reveal something about themselves that will be used to mock/ridicule them as they compete.

It makes the claim contestants come from all walks of life. This is so we can laugh at the heavyweights repeatedly failing events. Big people usually make an entertaining splash on the Big Red Balls as well. Screams are LOL sometimes.

Knowing this, I enjoy watching because, even though they're set up to fail, the contestants exhibit an indominitible spirit to finish; so representative of the slog that is my life.

NaturalJadeReviewed in the United States on July 13, 2019
1.0 out of 5 stars
Not Fair Play
It's so frustrating to watch people do their best and make it through the challenges (Victor, Nix) only to have someone who goes out of their way to knock out a fellow challenger then to basically swim their way to the win (Des) for the finals, hardly doing any of the challenges. Totally NOT right. Totally NOT fair. NOT watching any more of this show.
2 people found this helpful

Paul L JackReviewed in the United States on January 17, 2019
4.0 out of 5 stars
funny stuff
on obstacle course the the contestants have to bounce, duck, swing, and slip and slide through..usually pretty funny stuff. nice to see this from other countries. have watched the american version for many years. would recommend

Josh G.Reviewed in the United States on September 12, 2020
5.0 out of 5 stars
Silly humorous show
All the contestants are good sports and have my respect to be determined to finish an exhausting and nearly impossible obstacle course. Very entertaining and gets a chuckle out of me at times although know I would never be able to complete an obstacle course like this competitively myself.

Joanne GReviewed in the United States on October 15, 2018
1.0 out of 5 stars
Would rather watch the grass grow...
I expected this show to be full of action however it's quite the opposite. With all the editing they do, the show could be watched in 1/2 hour but they drag it on and on with a ton of unnecessary slow motions and replays along with too much talk and a very boring host.
2 people found this helpful

Billizon HughesReviewed in the United States on July 1, 2019
5.0 out of 5 stars
Good family fun. It's silly but it makes us laugh!
We really like all of the wipeout series. This is the British production. We like British humor and wipeout, so we really have fun with this one.
See all reviews
Back to top
Get to Know Us
Make Money with Us
Amazon Payment Products
Let Us Help You
EnglishChoose a language for shopping. United StatesChoose a country/region for shopping.
© 1996-2021, Amazon.com, Inc. or its affiliates