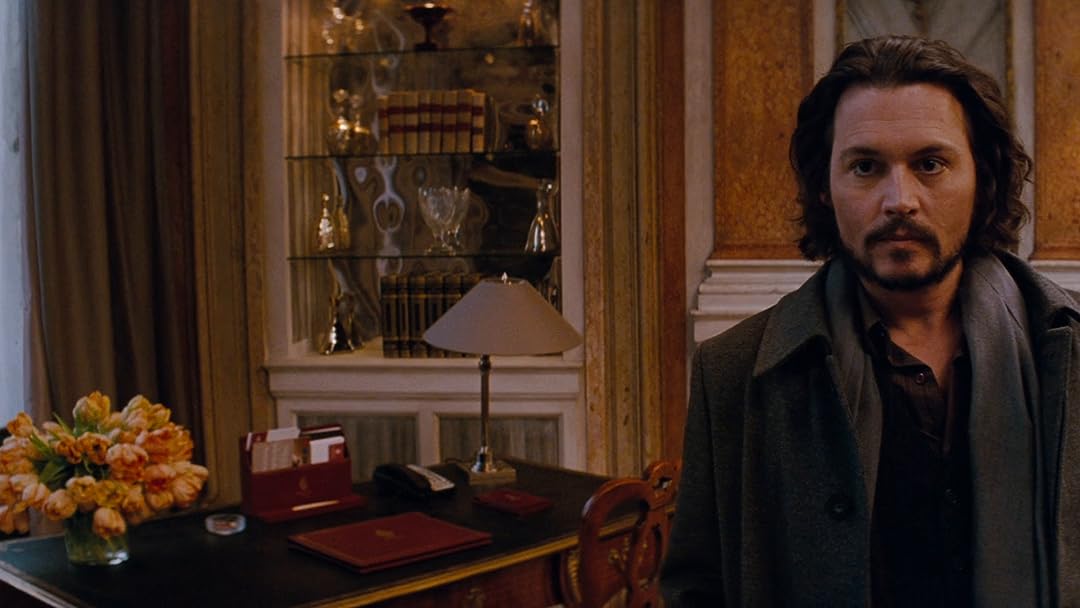 (4,038)
6.01 h 43 min2010X-RayUHDPG-13
A mysterious woman (Angelina Jolie) and a mild-mannered American (Johnny Depp) become involved in web of intrigue, romance and danger in this international action thriller set in the spectacular city of Venice, Italy.

joel wingReviewed in the United States on July 21, 2020
2.0 out of 5 stars
Supposed to be sexy and mysterious but story never catches on
Verified purchase
A beautiful woman named Elise Clifton-Ward (Angelina Jolie) meets a math teacher Frank Tupelo (Johnny Depp) on a train to Venice and they start a conversation. Next thing you know she invites him to stay with her. It’s an odd couple in more ways than one especially because it seems like every cop in the world is following her. The movie turns out to be about the police, a Russian gangster and Clifton-Ward all looking for a notorious criminals named Alexander Pearce. The problem is that the plot never catches you. Yes, Jolie looks great. Depp’s character seems completely out of his element. It’s supposed to be this sexy, crime drama with mystery and chases but it simply never gets interesting.
C
21 people found this helpful

VAnneReviewed in the United States on April 12, 2018
5.0 out of 5 stars
Love This! Johnny Depp, Angelina Jolie, Venice, humor, romance, chases, plot twists. Yummy.
Verified purchase
I've watched this many times. I still watch this if I don't have anything new to see. I love the nuances of the relationship between Elise and Frank, the plot twists, and the elegance of it all. Frank vs. first love, Alexander, is a delight to watch unfold. Johnny Depp's performances are always wonderfully nuanced, and the humor underplaying his romance with Elise is fun to watch. The bits about an American who doesn't speak Italian but instead speaks Spanish in Venice tickle my funny bone every time. I have never met a cool math teacher from Wisconsin like Frank--not sure they exist!--but I must say I was glad Frank did not have a "Scansin" speech pattern and accent. That would have been totally unromantic... :-)

Bottom line--if you like subtle (or not so subtle) humor, with a nice romance and a love for a chase or two, not to mention Johnny Depp and Angelina Jolie, try this!

A. Film LoverReviewed in the United States on October 5, 2020
1.0 out of 5 stars
Tourist trap
Verified purchase
If you want to know just how far audiences and films have devolved, just read all these five-star reviews. They're shocking, actually, because what's on view here is a truly awful movie from start to finish, from frame one to the end. Angelina Jolie is a joke and not a funny joke - I don't see what people find attractive, frankly, but that's fine, that's just personal taste. But the ACTING? Somnambulistic, horrid Brit accent, terrible. Depp is also bad but it's not his fault - well, the hair and beard are his fault, but the script isn't. No, reviewers, there are no "twists" in this movie - everything is telegraphed miles in advance and anyone who doesn't know how this will end has clearly not seen any movies in the last two decades. Sure, Venice is lovely, so what?

Terrible script, bad acting (Paul Bettany - has he EVER been in a movie and not played this role?), cookie-cutter "villains" right out of Screenwriting 101 playbook, a terrible score by the occasionally talented James Newton Howard. But the crime here, the real crime, is the power and money seducing of a man whose first film was a classic - The Lives of Others. But, that allure must have been strong, however it did him no good whatsoever. And let's talk about THAT for a minute. This film cost over 100 million bucks. It grossed around 60 million in the States. And they would have everyone believe that the overseas grosses were over 240 million bucks. Nope, not possible, total BS - international grosses were NEVER a thing like they are today - it began happening in the 90s, this lying about grosses no one could actually check. Because let me tell you something - if this film had grosses like that, the director would have been sought after for EVERY Hollywood film being made. He wasn't. Also, the SAY 100 million for the budget - add on another 50 or 60 for promotion, maybe even more. And then ask the profit participants how much they've made - the answer will be zero because it simply tanked and no one wants to admit it. Transfer is fine, movie is a mess. But on Amazon - they LOVE it!!!

esoterikaReviewed in the United States on July 31, 2020
2.0 out of 5 stars
What a stinker!
Verified purchase
Jolie and Depp on a romp in Venice with intrigue and suspense--what could go wrong? Well, everything, it seems. Every character is a flat, empty cliche, the movie is filled with bumbling cops from three countries, the music is extremely overwrought, the dialogue is lifeless, and the plot drags unforgivably, again and again. Worst of all, the stars somehow have the chemistry of wet cardboard. Jolie's character is alluring and mysterious but has zero personality; we never do get past her cool veneer. Depp is mild-mannered and ordinary, the dullest Depp performance I've ever seen. I ended up fast-forwarding through scenes hoping it would get better, but it didn't. The ending plot twist is cute but predictable. I'm only giving it two stars because of the Venetian and human scenery, and a mildly amusing Timothy Dalton cameo.
15 people found this helpful

Bhatta's ReviewsReviewed in the United States on August 10, 2020
3.0 out of 5 stars
Re-watched it in 4K UHD!
Verified purchase
This is not a new movie and I had watched it when it was released back in 2010 in theater and later on rental DVD, But then, since it was now "free" on Amazon Prime video for Prime Membership and it seems to have been released with new hype tagged as "4K UHD" resolution and thought to myself -- Why not?. It was not too bad a movie, It does have its charms, when it was released it did get my full devoted attention especially loving the acting of Johnny Depp to look messy, dirty and excessively wealthy and thus pampered intentionally for the character he plays, Angelina Jolie for her charming seductive looks, plus the beautiful scenes in Venice etc;

The 4K UHD ultra hi-definition did not improve the picture quality nor got the story-line any new perspective in anyways so it was no big improvement for me. Overall, it is watchable once for that "one time" evening action-comedy-drama that both the lead actors are nicely capable of.

WalterMelvinRobertsIIIReviewed in the United States on August 12, 2020
1.0 out of 5 stars
Thoughtless Drivel
Verified purchase
Obviously this movie was made back in the day when Ms. Jolie was a hot draw (mark how faithfully the camera follows her ass in the opening scenes) and Mr. Depp was not adverse to a big paycheck for work in a film of no intrinsic value whatsoever. A silly, silly mash-up of espionage thriller/parody with a romantic comedy (sort of). The ONLY thing good about this movie are the vistas of Venice itself. I saw it when it was released in the theaters and watched it again just because I was bored as heck recently -- despite the fact of remembering it as a complete disappointment and waste of time the first time around. So I guess if you are really bored and your mind accustomed to digesting saw-dust, heck, GO FOR IT.
5 people found this helpful

nicReviewed in the United States on August 3, 2020
2.0 out of 5 stars
Got really annoying, can't recommend this movie except for lovely Venice.
Verified purchase
The script seems written by a 16 year old boy. I don't need this kind of movie to be absolutely realistic but the police were unrealistically and annoyingly inept. The music didn't fit and was so cheesy that it ruins some scenes, rather than enhancing them. Every man in this movie turning around dazzled by Jolie (or objectifying her) becomes comical by the end, particularly as Jolie has been more alluring in other movies. Also her always having to be sexy is so cringe-worthy (that stupid knife scene...ugh). The script is just so bad. The characters so flat and boring. Venice is beautiful though.
4 people found this helpful

SMReviewed in the United States on July 24, 2016
4.0 out of 5 stars
Overlooked diamond in the rough...
Verified purchase
Florian Henckel von Donnersmarck's, The Tourist, is beautifully filmed and harkens back to the big productions of the golden era of Hollywood. Johnny Depp's performance was sweetly charismatic in this remake, and Angelina Jolie is simply stunning as the glamorous female lead. Their onscreen chemistry was engaging and the entire cast showcased their talents in every scene.

My only real criticisms were perhaps how quickly Jolie's character, Elise, developed such a deep emotional attachment to Depp's character, Frank, when she was supposedly in love with Alexander, or the credibility of the cursory back story of Jolie's character. Perhaps a few more scenes with Depp and Jolie may have solidified the emotional involvement between the two main characters, but both actors portrayed their characters well within the film. The talents of Paul Bettany, Steven Berkoff, Timothy Dalton, Raoul Bova, and Rufus Sewell also bear mentioning. Their performances were equally entertaining as well, in both the dramatic and subtle comedic moments throughout the film.

A special mention to James Newton Howard and Gabriel Yared for the music. Newton's music score truly captured the beauty and action throughout the film, and Yared's "Dance in F" was exquisitely moving in its grace. The film's soundtrack often was hauntingly beautiful and easily reflected a romantic intimacy that other movie scores simply lack.

The Tourist leads the audience into a world of intrigue, beauty, and glamorous elegance with beautiful locations and equally beautiful "movie stars" that many overlooked in favor of more mainstream films, which was unfortunate for this cinematic, charming escape. Don't make the same mistake. The Tourist is worthy of a look.
10 people found this helpful
See all reviews
Back to top
Get to Know Us
Make Money with Us
Amazon Payment Products
Let Us Help You
EnglishChoose a language for shopping. United StatesChoose a country/region for shopping.
© 1996-2022, Amazon.com, Inc. or its affiliates