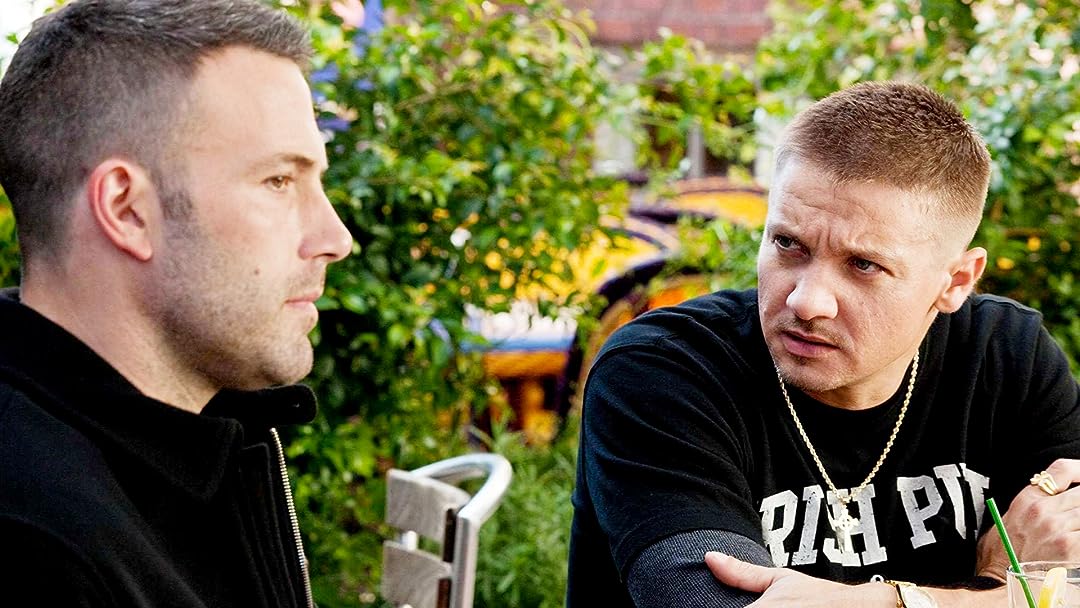 (6,803)
7.52 h 4 min2010X-RayR
A bank robber falls in love with a former robbery hostage and decides he wants out of the life. With the Feds closing in he must choose: betray his friends or lose the woman he loves.

Fred C. DobbsReviewed in the United States on March 4, 2018
5.0 out of 5 stars
Not an Affleck fan - but
Verified purchase
I looked at most of the one star reviews of this movie not believing anyone could give it one star, but most were about it downloaded slow, the dvd was scratched when they received, etc, and etc, which are not movie reviews. This is a 5 star movie all the way around - I am not a Affleck fan so I was pleasantly surprised how much I enjoyed this movie. Well done with great acting.
20 people found this helpful

cinestReviewed in the United States on February 2, 2020
1.0 out of 5 stars
Misguided, Slow and Cliché
Verified purchase
The cast is pretty good and in parts the movie grabs your attention. But it is a very slow movie and overall to falls flat: a cliché plot with not much to show for (and last scenes are recast of familiar twists from other movies. The plot is weak and not realistic: a bank branch manager, single, immediately falls for a stranger; the kidnapping’s function is only to bring in a love story that “changes” a bad guy into a slightly better; mafia mob is a house of cards; SWAT team’s failure and so on.
All this pales with the fact that the movie romanticizes robbers and killings. Would anyone watch it again?
8 people found this helpful

joel wingReviewed in the United States on March 25, 2020
3.0 out of 5 stars
Ben Affleck writes & directs bank heist-love story
Verified purchase
I really liked The Town when it came out in the theaters in 2010 but upon further viewings I came to question whether Ben Affleck who directed, starred and co-wrote the movie was trying to do too much. That arises from the fact that The Town is both a heist film and a love story. I’m not sure there was a good balance between those two.

Affleck as Doug leads a bank robbing team made up of Jeremy Renner as James-Jem, Owen Burke as Desmond-Dez and Slaine as Albert-Gloansy. The film opens with a job where they run into bank teller Rebecca Hall as Claire and temporarily take her hostage. The problem arises when the gang finds out she lives right next to them, and they’re afraid they will run into her and she will identify them to the police. Doug gets the job of taking care of her. Unexpectedly he falls in love instead. Here’s where the storyline comes into question. Does it spend too much time on the romance? Still not sure.

I still give The Town a thumbs up. The bank jobs are well done and full of action especially the one at the end, which is the climax. The conclusion also effectively plays on Doug as both a criminal and his love for Claire.
C

Louise BaileyReviewed in the United States on February 15, 2021
5.0 out of 5 stars
Nearly perfect
Verified purchase
For acting and directing, this gets 5+ stars. This film has some fantastic memorable quotes.
For plot, it gets 4.5 stars. Sure, it's a bit cliche but it's well done. The scene where the florist henchman leaves a funeral wreath on the lady's fence was the only outlandishly goofy scene that throws it off, but all the rest was proper entertainment. If the title of the movie wasn't 'The Town' then I'd likely not appreciate the aspect of romanticizing criminals, but since the movie's message is about a bloke trying to escape his roots tied to the town's dynamics, then it all makes sense. The robbery victim humanizes the robber, from which he has an epiphany that allows him to transcend the life he was born into. I think a key scene is when his buddy (Jeremy Renner) passionately reacts to Afflek's character saying he's moving on/leaving. The gist is these kids never knew anything better nor different than the life they are in. They are 'baddies' in that they know right from wrong but being born and raised in the wrong is all they know and this 'code of silence' between them all is thick. An additional 2 stars for this movie inspiring me to now research Charlestown and its history.

neverwithoutespressoReviewed in the United States on April 11, 2016
5.0 out of 5 stars
Affleck Has Grown Exponentially
Verified purchase
Ben Affleck has grown exponentially as an actor and a director. I celebrated his newfound gifts as I watched this film. His portrayal of McCrae was mature and complete. In addition, every aspect of this film was first-class cinema. The performance of every actor was superb. Each character was well developed and believable. The pacing was taut and tight and there was plenty of suspense and drama. There was not one wasted, extra minute.

P.S. One of the delights of this movie is that it reminded me of the good gangster films of the '30s and '40s. There was
also a quality that reminded me of "On the Waterfront": A young man trying to be a man in a tough working-class environment, who meets a soft and gentle woman.
9 people found this helpful

J. Michael ClickReviewed in the United States on December 14, 2013
5.0 out of 5 stars
Affleck: Auteur on the Rise
Verified purchase
What a film! "The Town" is a powerful testament to the skills of Ben Affleck, who did triple duty as the co-writer, director, and star of this taut, exciting crime-thriller. The film is set in Charlestown, the oldest neighborhood in the city of Boston, a one-square mile hotbed of drugs, muggings, armed robberies and other assorted nefarious activities. Affleck plays a member of a gang of second-generation criminals who were born and raised in ... and seemingly unable to escape from ... this toxic environment. Following a daring bank robbery, Affleck makes the mistake of falling in love with one of the bank's employees (Rebecca Hall), who is unaware that he was the thief who took her hostage during the heist. Complicating matters is the fact that the FBI is closing in, putting all sorts of pressure on the gang, particularly the violent hothead (Jeremy Renner) whose family took Affleck under their wing when his father went to prison. Now the gang is being pressured by an underworld kingmaker (Pete Postlethwaite) to pull off another huge, tremendously complicated and risky job.

Not only does Affleck do yeoman's service as an actor and director, he manages to pull amazing performances from the rest of the cast, especially Renner who received a boatload of Supporting Actor nominations, including bids for the Oscar and the Golden Globe. In his penultimate performance (he died before the movie was released), Pete Postlethwaite oozes barely contained menace, and actress Blake Lively is disturbingly effective as Renner's junkie sister. Kudos also to Rebecca Hall, Jon Hamm (as a hard-nosed FBI agent), and Chris Cooper, who makes a strong impression in his brief scene as Affleck's bitter father.

There are numerous versions of the film available on video, including the theatrical cut, an extended cut, and a special collector's edition. I viewed the single-disc blu-ray, which offered both the theatrical version and the extended cut on the same disc. Many enthusiasts were concerned about the possibility of compression issues affecting this release, but I thought it looked and sounded fantastic. I'm usually kind of picky about such things, but I was so involved in the story and the performances that any flaws went unnoticed. "The Town" is a harbinger of a blossoming film talent that would come to fruition in Affleck's award-winning "Argo" two years later. Highly recommended.
17 people found this helpful

Katy GReviewed in the United States on November 25, 2019
3.0 out of 5 stars
If it sounds like it has a ridiculous plot -- it does
Verified purchase
This is the story of some Boston bank robbers... one of whom happens to fall for a bank hostage. If it seems silly, it is. I don't get the fairly good ratings for this. I really like the female lead, Rebecca Hall, or I would give it a lower rating. And although it was far fetched, it was also predictable. And I could care less about any of the characters. The only real positives are that there were a few good chase scenes... and a number of quality actors. However, I wouldn't watch it unless you can see it for free and have nothing good to do.

Texas GunsafeReviewed in the United States on November 10, 2019
3.0 out of 5 stars
Not a 7.9 of 10 star movie in my opinion
Verified purchase
That movie website gave this 7.9 or 10. I don't see it. I felt there were a lot of things they gleaned over in this movie, removing some details to put it around two hours. This came with the two extended versions and even the two hour and 33 minute version had details missing that left me somewhat confused but these were minor. I just didn't like the story or the acting too much. I'm not a Ben Afleck fan by any means but this movie was recommended to me by a friend so I bought it. It's a shame I can't return it because I'd probably never watch it again.
One person found this helpful
See all reviews
Back to top
Get to Know Us
Make Money with Us
Amazon Payment Products
Let Us Help You
EnglishChoose a language for shopping. United StatesChoose a country/region for shopping.
© 1996-2021, Amazon.com, Inc. or its affiliates