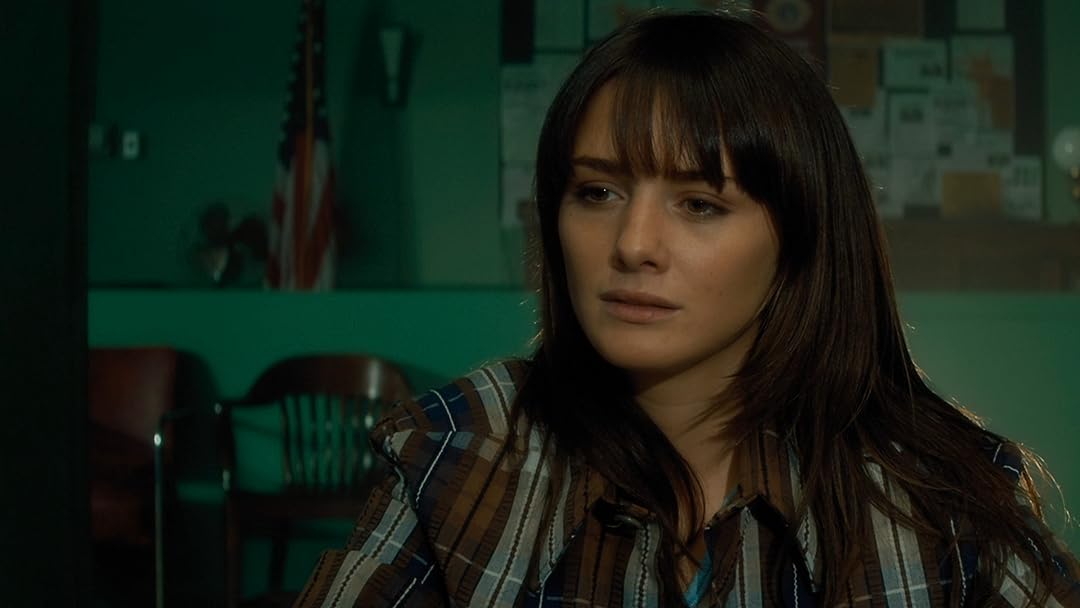 (1,761)
5.61 h 26 min2014X-RayR
65 years after a masked serial killer terrorized the small town of Texarkana, the so-called "moonlight murders" begin again. Is it a copycat or something even more sinister?

DafReviewed in the United States on August 29, 2022
2.0 out of 5 stars
Someone tried to make a "tasteful" slasher flick
Verified purchase
I can appreciate the filmmakers seemed to try hard not to make something too obnoxious and exploitative of the real-life events that serve as the film's background story, but it's all for naught: the more they solemnly and "respectfully" call attention to the real murders the more it just leaves a bad taste in your mouth.

The result plays like 'Scream' with all the fun drained out of it (it's honestly a bit of a ripoff of that movie in more ways than one). More boring than it is compelling, the tone is made all the more dour by the image's blue/orange color scheme (and sometimes just plain orange - somebody get that police station some blinds!) .

Not all of it is bad: the southern setting gives the movie a lot of character (it's a shame there aren't more horror movies set in the south, especially ones where the locals are the heroes). The acting in general is pretty good: Anthony Anderson and Veronica Cartwright in particular are pretty enjoyable. And as far as comic relief goes there's a moment where a couple of teens meet to try some gay experimenting but aren't even sure how to go about it that's a little funny without going overboard.

I think if they just stuck to making a fun southern slasher flick and put some distance between itself and the actual events they might have had something, but I can only recommend this one if you really have nothing better to do.

Julian KennedyReviewed in the United States on May 3, 2017
4.0 out of 5 stars
The movie that dreaded the ending.
Verified purchase
The Town That Dreaded Sundown: 7 out of 10: Before I start with the spoiler let me say for the vast length of its running time The Town that Dreaded Sundown is a top quality horror film with good atmosphere and some genuinely top notch scenes. It is a remake of the mid-seventies “true story” slasher flick that, like the similarly themed Black Christmas, came out a few years before Halloween but simply didn’t have the magic of that meticulous movie. The remake intelligently folds the original film into its narrative by having a festival celebrating when the horror film was made locally and the movie opens in a drive-in theater at the heart of that festival.
Along with solid visuals, location shooting, and camera work the film sports above board, for the genre, acting. In fact, it is a delight to see Anthony Anderson back on the big screen chewing scenery and taking names. The late Ed Lauter, an actor you immediately recognize but cannot quite place, is also very good in his last role. (As an aside to this aside this movie also sports Edward Herrmann’s last role and while he doesn’t quite make the same impression as Ed in this movie he certainly fits the actor you immediately recognize but cannot quite place trope to a T.)

Okay, Spoiler Alert. (Submarine alarm horn alert, interior perspective repeated twice.) The “reveal” for this film is awful. The movie simply cheats. You are supposed to guess which of our heroine’s friends is dressing up as an old serial killer and recreating his crimes. The movie spends a significant amount of time on this mystery. It turns out to be two people. The first is our protagonist’s boyfriend who is “killed” while they are about to have sex at the beginning of the flick. Why is he a masked serial killer? I think he claimed he was either was bored or wanted to be famous. His motivation is as weak as having him alive. I mean our heroine goes to his funeral the next day. Nobody noticed the body wasn’t him? Switching bodies doesn’t usually work during a murder investigation.

Our other killer is the helpful and almost a love interest in his own right Deputy Foster who reveals (at the end of course) that he is the grandson of the killer… haha just kidding he reveals he is the grandson of the killer’s last victim named McCreedy. The film even takes the time to visit a local filmmaker historian to declares this unknown (and up to this point unmentioned) McCreedy relative may be our killer. The family was angry because his killing was left out of the original exploitation film apparently. (Fair enough I know the film claims they felt overlooked since the original murder. But come on people. My relative was brutally chopped by an ax and not hit by a train so our family needs um credit? It is a strange grudge to keep up for a year let alone over three generations.)

Could the ending have worked? Well make the boyfriend's body disappear after being killed (and having authority figures secretly doubt our heroine till the next murders) is a tried and true technique that would have fit well here. Having Deputy Foster named Deputy McCreedy would have also gone a long way to creating suspense (Maybe that filmmaker/historian is right and if so the killer was at her house the entire time.) In reality, however, the biggest twin problems would still remain. Neither character has anything resembling a motivation to go around killing their neighbors and more damning they have absolutely no connection with each other. I have no idea how the jock boyfriend and the Deputy even know each other let alone are intimate enough to go on a secret killing spree together.

Up until that point, the film is fun. It can be brutal and has some scares but it earns them honestly. The film is well acted with a nice progressive polish that one does not often see in one's backwoods slasher films. Overall a good movie that hits above its weight let down by a poorly thought out denouement
20 people found this helpful

StotReviewed in the United States on October 11, 2022
5.0 out of 5 stars
Surprise... A remake worth a watch!
Verified purchase
Right off the bat, I loved the 2 jump scares (to me) that actually got to me... a horror movie fan that has seen enough horror movies to not be easily jump scared. I have seen the original and though I normally don't like remakes, I was in the mood for one like this and decided to give it a try. This did not disappoint me like remakes usually do. Gripping moment when a character close to the final girl is brutally shot. Honestly... as much as I don't like the remake-itis that today's studios have to reign in the dollars, there are always a few outliers that are actually effective enough to entertain like this movie did for me tonight. Bravo to this crew... a well made remake.

Gun4hireReviewed in the United States on January 23, 2019
3.0 out of 5 stars
Good for a boring night.
Verified purchase
Decent slasher flick, I do like how they play off the original movie. Some of the scenes dragged on longer than they should. Some things are a bit far fetch, sorry girl that pretty is never an outcast. The romance was obvious and seemed meh; for the lack of a better word. Just wasn't feeling it, felt like they were kissing because the script said kiss to in this scene, not because they liked each other. The visuals in the movie we're pretty, and looked good. It didn't work out in every scene but you could tell a great deal of thought and care went into it. I was born and raised in Ar, and I watched the original as a tween and as an adult been down to Texarkana many a time and most people there don't even know the original movie exists. The original movie does not have the lasting impact this movie gives it. Other then that it is a good masked boogie man killer movie, not the best but not the worse.
3 people found this helpful

J. GibsonReviewed in the United States on February 21, 2019
2.0 out of 5 stars
Ehhhh
Verified purchase
Honestly the movie was okay at best in the slasher horror genre of movies, but while watching it I kind of felt confused at times with the way the law enforcement was portrayed especially after an active duty Marine was killed off within the first 40 minutes of the movie. Where was the NCIS & FBI at ? Why weren't they already on the scene within like at 48 hours of the Marine being murdered like he was ? Seriously, was an irritating point to me that proper protocol wasn't being followed on this Marine's murder? Other than that, the movie wasn't anything crazy or new, just another in the long line of remakes of movies from the early 2010s. I did find it fairly comedic when the Phantom killed the guy with a knife duct taped to a Trombone. That was definitely a solid kill in my book. Wouldn't recommend this as a MUST SEE, but as a something that should be seen if they enjoy mediocre remakes.
2 people found this helpful

MrutherReviewed in the United States on September 6, 2022
4.0 out of 5 stars
Decent movie
Verified purchase
I would have given this one 5 stars but though the plot was there it just didn't all click for me. Stuff just seemed to happen and it didn't feel like there was a solid story for it all. I still enjoyed the movie though.
One person found this helpful

City LightsReviewed in the United States on February 26, 2015
4.0 out of 5 stars
There's more to this movie than most people give it credit for. It's hardly earth shattering but well done.
Verified purchase
I think this film is very insightful and revealing. I imagine that, to some degree it reveals a realistic slice of life in Texarkana (although I have never been there in my life). I'm sure that many people like myself who have never even step foot in that state (or Arkansas) think of Larry Hagman et al in the 80's TV melodrama "Dallas". Well, America is full of smaller cities and backroad townships and it can get kinda weird.

The writers have cleverly chosen a small city setting that isn't fictional and whose name is recognizable.
We get a sense of the residents values and attitudes and introduce a horror story that could easily become an urban legend based on this movie which is all about a film that focuses around a local urban legend.

altogether, the plot is very predictable but the script holds it's own and is substantially buoyant enough to keep the ship afloat and sail it smoothly into port for a neat little ending.
7 people found this helpful

D. ValleReviewed in the United States on October 1, 2022
1.0 out of 5 stars
There’s a magic trick toward the end
Verified purchase
The movie premise was ok I suppose but toward the end there’s a magic trick which I won’t spoil but it is indeed movie magic. I also didn’t care for the cinematography but if you choose to go forward and watch the movie, I do hope you found it more entertaining than my husband and I.
See all reviews
Back to top
Get to Know Us
Make Money with Us
Amazon Payment Products
Let Us Help You
EnglishChoose a language for shopping. United StatesChoose a country/region for shopping.
© 1996-2022, Amazon.com, Inc. or its affiliates