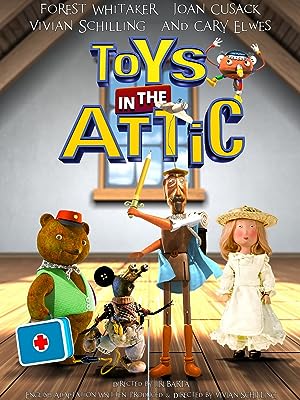 Toys in the Attic

(78)6.41 h 18 min2013PG
When lovely Buttercup (Vivian Schilling) is kidnapped, it is up to Teddy (Forest Whitaker), Madame Curie (Joan Cusack), and Sir Handsome (Cary Elwes) to rescue her from the land of evil.

wiredweirdReviewed in the United States on March 24, 2013
5.0 out of 5 stars
Awesome!
Verified purchase
I mean really, I stand in awe.

I didn't know, at first, that this was by Jiri (pronounced kind of like "Year-zhee") Barta. That would have sold me right then, since Czech [[ASIN:6305779635 animators]] and [[ASIN:B000GTJS9E Barta]] in particular display senses of the macabre, joyous, heroic, delicate, and mysterious all at once. (Since so many of them worked, or tried to, during the Soviet oppression, that seems rather natural.)

This, like any brilliant work of art, works at many levels. Physically the puppets and objects combine Svankamjer's sensibilities with Joseph Cornell's supply closet. In image creation, Barta melds live action with flip-books (or something close), stop animation, overdrawing, and I don't know what-all in computer animation and postproduction. The stop-animated puppets, however, embody unique personalities in their materials, structure, and articulation, even before you hear them speak,

Skipping ahead, I have to applaud the English language rendering. Taken in itself, it expresses the characters and helps bring them to life, even though English was never considered when the movie's original Czech version came out. But, the English is dubbed so it syncs to Czech mouth movements (mostly). This involved heroics on the parts of the scriptwriters, voice actors, and sound masters to create some cadence that a lip-reader might believe.

Backing up to the original, though, this represents a rather daring fable of personal freedom against the militarists, something Barta lived through before the Velvet Revolution. The plaster talking head had some reality in the Stalin era, and the spies and operatives remained real until the Stasi got their pink slips.

Behind and in front of everything else, though, this stands out as a major artwork, masterfully crafted and carrying more meaning than any one reading can disclose. I've admired Barta's art before. This, however, impresses me in more different ways than I can hope to name.

Lilo KReviewed in the United States on August 17, 2013
4.0 out of 5 stars
A little strange
Verified purchase
This was a little like watching Gumby. Yes, it was Claymation and the toys looked a little creepy to me, but my 6 year old daughter somehow enjoyed it so I have to give it at least a 4-star. She's actually watched it at least 3 x now since I've bought it for Christmas. The story does at least have a good moral value to it so that makes up for the creepy appearance of some of the characters. It has a very old European feel to it, lol. The main character is an old porcelain doll which creeps me out to begin with, but don't judge me on that. I've probably seen Chucky too many times.
2 people found this helpful
Report abuse

MamabearReviewed in the United States on November 11, 2015
5.0 out of 5 stars
Great price for an exceptional stop motion film!
Verified purchase
Great film! My son and I are fans of offbeat stop motion animation and found this film to be a real gem. We discovered it at our library and was happy to buy it. I think $5 is a bargain for this movie. My five year old loves this movie, but I could however imagine some little kids finding some of the characters spooky. I recommend guardians viewing it first and deciding from there. If you are interested in something out of the norm this film is it.
2 people found this helpful
Report abuse

Krank1960Reviewed in the United States on July 3, 2014
4.0 out of 5 stars
Check it out...
Verified purchase
Wow, What can I say. This was a very cool movie. I liked it because it's off the beaten bath and very entertaining. the effort was well played and the quality shows in the end product. I will watch this many times over. Give it a try and you will not be disappointed. It sneaks up on you...
2 people found this helpful
Report abuse

Paul S. PersonReviewed in the United States on January 14, 2014
3.0 out of 5 stars
I Wish It Were Better
Verified purchase
This never really clicked for me.

I think I kept expecting something better, and it never arrived.

M. J. ThysellReviewed in the United States on May 2, 2015
2.0 out of 5 stars
Wonderful animation, but painfully boring.
Verified purchase
I'm writing this review as I watch it.

20 minutes in: Animation is wonderful, but I am thoroughly bored out of my mind. Stopped the film to read reviews. Decided I will continue. Started this review.
30 minutes in: 1 interesting and mildly dark thing has happened. At this point, I'm rooting for the cat.
45 minutes in: Very creative use of materials to achieve special effects. Still bored by the story. I can see why people say this is too disturbing for little kids. Older kids would have no problems with it, but I can't see this appealing to older children until they become teenagers in high school --- or maybe college students -- who have serious interest in art and film making. The cat is still my favorite character.
1 hour in: I feel like the plaster headed bust character is cheating on the animation. It makes sense, but still... Otherwise, I'm very impressed from a technical achievement point, yet I've seen enough. I don't care about any of the characters; I want the good guys to fail as that could make it interesting. On the other hand, the villains are dull too. There's only 18 minutes left, so I'll stick it out. Not enough cat in the last 15 minutes.

End credits: Ugh, Buttercup clones; and it was pointless. I did enjoy the disco celebration, even if it was short-lived. The impromptu black hole was just bizarre, and not in a good way as a story-telling device. The cat just completely disappears from the story; of course the one character I liked gets hosed.

I was really looking forward to seeing this film, but I was sorely disappointed. People say this is dark, but only marginally. It's spectacularly made, but dull. It's great eye candy, but a bland kidnapping story.
Report abuse
See all reviews
Back to top
Get to Know Us
Make Money with Us
Amazon Payment Products
Let Us Help You
EnglishChoose a language for shopping. United StatesChoose a country/region for shopping.
© 1996-2021, Amazon.com, Inc. or its affiliates