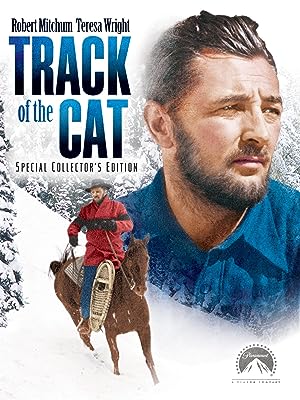 Track of the Cat

(193)
6.41 h 42 min195413+
While Curt Bridges tracks down the panther that killed his brother Arthur, his family argues and bickers over whether younger brother Harold should marry a much-despised neighbor girl.

Kindle CustomerReviewed in the United States on December 2, 2021
1.0 out of 5 stars
Waste of Mitchum's and other actor's talent
Verified purchase
I am on a quest to watch every Robert Mitchum movie I can access. I watched the original Cape Fear as a young child and never got over my fear of him. However, once I recently watched Cape Fear again, I am determined to see as many of his 100 movies as I can. I've seen probably 6+ at this point. Not a lot, true, but this one is undoubtedly the worst thus far. Mitchum is barely in it - and when he is, he's always great at acting, but his character is thoroughly unlikable; just like every other character in the movie. It's boring, slow and the matriarch is so tiresome to listen to, I found myself saying 'oh shut up already' to the screen. Theresa Wright is in it and plays Mitchum's spinster sister. She whines throughout the entire movie - not that I blame her. They were both in Pursued as siblings again, just step. They're romantically linked and the movie is so much better. Anway, I found myself fast forwarding through many of the scenes. It's worth it for the colorization, the rest of it was a yawn.

John RushReviewed in the United States on August 24, 2014
4.0 out of 5 stars
Bob Mitchum stars but Tab Hunter shines
Verified purchase
first saw movie when I was around thirteen, made an impression on me even then. Very dark, little or no light moments.
How true might such be to real life? One wonders and I suppose in getting us to ponder life the director has achieved his aim.
Was the movie entertaining, not altogether yet Tab Hunter was perfectly adequate in his role and revealed a physique both athletic and easy on the eye. Mitchum's role was tough, he was tough, everything the author could have been looking for. The cast was splendid, dear old Dad, a drunkard but a pleasant drunk, he may have been the only one able to laugh at life, after all he kept a steady supply of booze on hand, that can help.

SleeksterReviewed in the United States on February 14, 2021
1.0 out of 5 stars
INCREDIBLY BORING
Verified purchase
Like licking lead paint off the wall...
or eating it.

Whatever the story line is supposed to be about, and without critiquing it at all, just know that this is one BORING, ham hocked directed and acted movie. The whole thing has the feel of mediocrity...and that's because it is crap.

Amazon CustomerReviewed in the United States on February 18, 2014
5.0 out of 5 stars
My Uncle Watched it 3X in Two Snowbound Days!
Verified purchase
My Uncle Ken (a trapper) who lives in the outback of South Dakota asked me to find this film for him. The only place I could find it was here. I received it in 2 days and immediately sent it to Ken who was not only surprised that I could find it, but that he got it so fast. With the heavy snows this winter, he tends his traps in the days and snuggles down in the evenings. He loved the movie--same as he remembered from 55 years ago at the movie house! On his first two days warming by the fire he watched it 3X in a row! Yes there are people who still live like this....hey, he's got electricity, running water, an indoor toilet (in addition to the old "pit" in out back), and a DVD player---What else could anyone want? LOL! 5
17 people found this helpful

Elizabeth MorseReviewed in the United States on April 2, 2022
2.0 out of 5 stars
WARNING: NOT IN CINEMASCOPE!
Verified purchase
One of the main reasons to watch this is Wellman's use of Cinemascope. But after the opening titles, the film is not longer letterboxed. Phooey on Amazon for not indicating in any way that the film has been altered.

Luz E. AlvarezReviewed in the United States on November 14, 2020
2.0 out of 5 stars
A WASTED CHANCE OF A GOOD STORY.
Verified purchase
I GUESS BOB MITCHUM NEEDED A PAY DAY & HUNTER TOTALLY OUT MANNED & OUT PERFORMED. THE SCENERY IS WORTH SEEING.

J. BattleReviewed in the United States on August 3, 2021
5.0 out of 5 stars
Almost Like Bluray and half the price...
Verified purchase
5 stars for the DVD!!! The print is exceptional. Looks as good as some mediocre blurays. 255:1 Cinemascope is a welcome sight to behold.

Patricia SimeonReviewed in the United States on May 19, 2014
4.0 out of 5 stars
A VERY DARK WESTERN
Verified purchase
This is indeed a very strange film, first by its cinematography, trying to avoid any lush colour, in any scene, mostly in the house, but outside too, with the exception of the flaming red jacket worn by Robert Mitchum, making a striking contrast with the snowy landscape all around. The screenplay seems to look more like a Eugene O'NEIL drama like "Desire Under the elms", with mixed characters, leaded by a rather dominating mother, and a weak father mostly interested in the bottle ! It's most unusual to watch a film in Warnercolor...in black and white, but William WELLMAN did it, and it still works, with some beautiful scenes, like the burrying of the son.
One person found this helpful
See all reviews
Back to top
Get to Know Us
Make Money with Us
Amazon Payment Products
Let Us Help You
EnglishChoose a language for shopping. United StatesChoose a country/region for shopping.
© 1996-2022, Amazon.com, Inc. or its affiliates