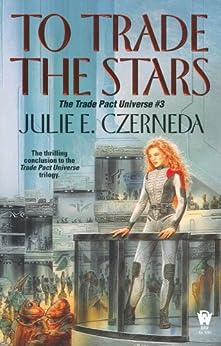 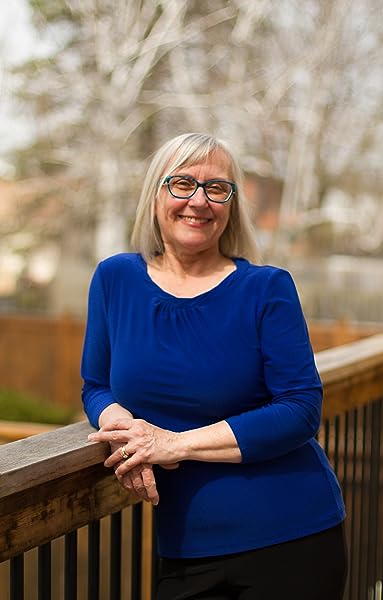 Now comes the final chapter: To Trade the Stars. The stage is set for a possibly cataclysmic confrontation in non-space-and the Speaker for the Clan Council and her human mate are about to find themselves in the heart of the conflict....
Read more
Previous page
Next page
Next 1 for you in this series See full series
Total Price: $9.99
Books In This Series (3 Books)
Complete Series
Trade Pact Universe
Kindle Edition
Page 1 of 1Start OverPage 1 of 1
Previous page
Next page

Julie E. Czerneda is a biologist and writer whose science fiction has received international acclaim, awards, and best-selling status. She is the author of the popular "Species Imperative" trilogy, the "Web Shifters" series, the "Trade Pact Universe" trilogy and her new "Stratification" novels. She was a finalist for the John W. Campbell Award for Best New Writer. Her stand-alone novel, In the Company of Others, won Canada's Prix Aurora Award and was a finalist for the Philip K. Dick Award for Distinguished SF. Julie lives with her husband and two children in the lake country of central Ontario, under skies so clear they could take seeing the Milky Way for granted, but never do. You can find her at www.czerneda.com.

"Truly alien aliens is Ms. Czerneda's forte. She creates such sophisticated characters that their utterly otherness is fascinating to unravel." -Romantic Times "With TO TRADE THE STARS, author Julie E. Czerneda has completed the third installment of her Trade Pact Universe series. In it, she offers the reader an interesting telepathic culture with a complex societal structure that takes plausible inspiration from the advantages and disadvantages of the powers of the Clan.The Clan has extraordinary powers, but plot, character and conflict are usually presented in a way that normalizes the extraordinary and makes it plausible rather than fantastic." -SCIFI.COM "Space opera fans will love TO TRADE THE STARS, a colorful action packed novel that brings to life many new worlds inhabited by various sentient and colorful species. The protagonists of this work are endearing characters whose love for each other means risking their lives to make sure the other one is safe. Julie E. Czernada ties up all the loose ends in her Trade Pact universe, making this one of the top science fiction series of the new millennium." -TheBestReviews.com --This text refers to an alternate kindle_edition edition.

A love of reading turned into a love of writing for Julie E. Czerneda. A former biologist, then writer and editor of non-fiction, in 1997 DAW Books published Julie's first sf novel, &quot;A Thousand Words for Stranger&quot; and she hasn't stopped since. Her work has received international acclaim, multiple awards,and best-selling status. You'll find her work in anthologies as well, as she enjoys working with other writers. Julie is a popular speaker, whether on writing, science, or the use of science fiction to promote scientific literacy. Her recent adventures included being Guest of Honour for the national conventions of New Zealand and Australia, as well as Master of Ceremonies for Anticipation, the Montreal Worldcon.

Her first novel led to The Clan Chronicles, a nine-book (3 trilogy) series concluding in &quot;To Guard Against the Dark.&quot; Fear not, fans of Sira, Morgan, and the gang. They're back in The Clan Chronicles: Tales from Plexis, an anthology from DAW containing original stories by other authors in Julie's world, as well as a framing novella of hers.

Oh, and when not writing or at conventions? Julie and her photographer husband grab their canoe and disappear into the glorious wilderness surrounding their central Ontario home.

4.4 out of 5 stars
4.4 out of 5
34 global ratings
How are ratings calculated?
To calculate the overall star rating and percentage breakdown by star, we don’t use a simple average. Instead, our system considers things like how recent a review is and if the reviewer bought the item on Amazon. It also analyzes reviews to verify trustworthiness.
Top reviews

P. M. Whitehouse
5.0 out of 5 stars Satisfying and believable 3rd book of the Trade Pact.
Reviewed in the United States on February 22, 2015
Verified Purchase
The 3rd book of the Trade Pact Universe featuring Sira and Justin Morgan, this is a satisfying conclusion to several of the threads leftover from A Thousand Words for Stranger and Ties of Power. You can read it on its own but it is best read after the Stratification series and the first two Trade Pact books. The plot is satisfying; the settings just detailed enough to allow the reader to create a mental image; the characters believable; the politics of the Clan (M'hiray) understandable based on their culture; and the non-humanoid aliens by turns cute, incredibly alien, and occasionally unsavory. Ms. Czerneda has done an excellent job of writing an entertaining story that while complete in itself, leaves enough doors, and hatches open to make the reader wish to read more.
Read more
Helpful
Report abuse

Leslie Bialler
VINE VOICE
5.0 out of 5 stars The Hounds of Love
Reviewed in the United States on July 7, 2002
Verified Purchase
"To Trade the Stars," the third in Julie E. Czerneda's "Trade Pact Universe" series, is as much about love (and looking for it in the wrong and the right places) as it is about resolving all--err, well many--of the plot lines begun in "A Thousand Words for Stranger" and "Ties of Power." And there are all kinds of love here: love of family; love of friends; even love between species. All the characters from the earlier books return: Sira di Sarc, now Speaker for the Clan Council; her "Chosen" Captain Jason Morgan; her schemeing relatives; Huido, the restauranteur; the twisted schemer Ren Symon; and the maddening Drapsk, who still insist that Sira be their "Mystic One." An interesting new clan member, Ruti, is also introduced, and she plays a key role in the proceedings.
Again the tale, at least slightly tongue in cheek (Sira is captured by Morgan's enemy and everyone else is zipping along trying to find her), rollicks along in alternating "Chapters" (told in the first person by Sira) and "Interludes," which clue you in to what other characters are doing. Czerneda keeps things moving along to a satisfying, moving finale.
While the publisher is billing the book as the end of a trilogy the author does seem to have left the possibility of continuing on (I for one would like to know what's next for Ruti) and I for one hope that she does.
Warning: Don't even think about reading this unless you've read the first two books in the series.
Read more
11 people found this helpful
Helpful
Report abuse

Bo Coyle
5.0 out of 5 stars Good Book
Reviewed in the United States on April 5, 2015
Verified Purchase
For me this was a satisfying completion to the Trade Pact Universe series. I came late to Czerneda's writing and read this series after reading Clan Chronicles. Meaning I read them in chronological order as relates to the story line rather than the order they were written. The characters are remarkably engaging and like their very complicated worlds, completely believable.
Read more
Helpful
Report abuse

Avid Reader
5.0 out of 5 stars Such a great conclusion for a sci-fi romance trilogy
Reviewed in the United States on April 8, 2014
Verified Purchase
I have the hard copies of this trilogy but wanted to reread it while on vacation so I purchased the kindle copies. I LOVE this author and her ability to convey her characters and her universe. I love the relationships developed in these books as well as the amazing alien species and their interactions. This is NOT a stand alone book; you'll need to read the first two to understand this one but it is so worth the read. Highly recommended.
Read more
Helpful
Report abuse

Devin J. Starlanyl
5.0 out of 5 stars Great series
Reviewed in the United States on March 25, 2013
Verified Purchase
Fascinating world and culture building with lovely characters and good story plots. This is the kind of science fiction that I crave. The first two parts of this series must be read before this.
Read more
Helpful
Report abuse

Daniel
4.0 out of 5 stars Fun read
Reviewed in the United States on August 15, 2014
Verified Purchase
I enjoyed the first book in this series, so I wanted to continue. I make 'friends' with the characters in the books I read. I hate to see them go! :-)
Read more
Helpful
Report abuse

Barbwp7
5.0 out of 5 stars Another good read
Reviewed in the United States on May 25, 2011
Verified Purchase
I enjoyed entering a universe created in the mind of this author. The characters are intriguing, the plots coherent. As part of a series, this book made me want to read the others, yet it could stand alone as a good read. The author's style is never intrusive yet often lyrical. I've read everything I could find written by her and have never been disappointed.
Read more
Helpful
Report abuse
See all reviews

Kindle Customer
4.0 out of 5 stars Another great one about Jason and Sira
Reviewed in the United Kingdom on August 18, 2005
Verified Purchase
Jason and Sira - he a human telepath and independent trader, she now Speaker for the Clan Council, as well as Jason's life partner - are trying to forge a life for themselves free of the demands of both the Clan and the Drapsk, a race determined to claim Sira as the long-awaited Mystic One. And as if these conflicting demands aren't making life complicated enough, there are at least two other factions with far more dangerous intentions seeking them out.
Any hope Sira and Jason have of charting their own course seems likely to vanish forever when they are enexpectedly caught in a conflict between the Drapsk and a mysterious race that dwells in the M'hir. With all of their energies directed toward this crisis, will they become easy prey for those among the Clan and the Humans who are already mobilizing to take advantage of the coming conflict?
The conclusion to this trilogy was an exiting read. I enjoyed the combination of fantasy and science fiction that Czerneda manages to put into most of her books.
Read more
2 people found this helpful
Report abuse
See all reviews