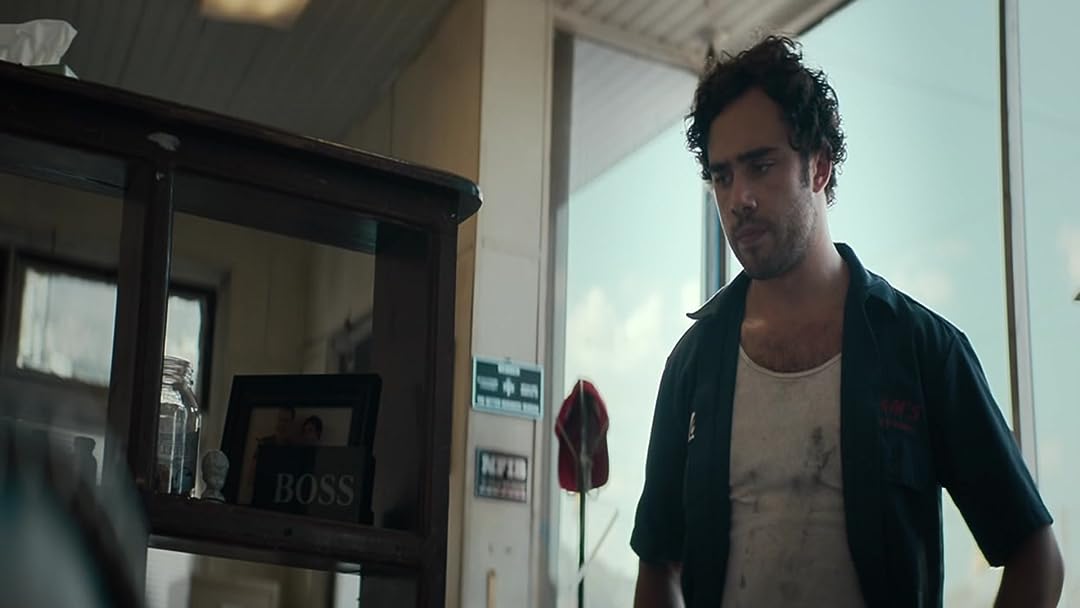 (1,081)
4.41 h 27 min2019X-RayR
A down and out stock car racing legend (John Travolta) is drawn back to the dirt track when his son (Toby Sebastian), an aspiring driver, joins a rival racing team, which sparks an intense and dangerous competition between father and son.

BobReviewed in the United States on August 3, 2019
1.0 out of 5 stars
We had to wait a long time for another racing movie...
Verified purchase
...and this is what we got. So **SPOILERS** right up front. This movie is three or four movies that were never really fleshed out. First you have this father son dynamic where the son is following in his fathers footsteps but the car lets him down, and in order to keep pushing forward he has to get a new ride. Okay I'm on board, the writing is kind of terrible, and side bar, why would the announcers on an Alabama short track have mid western accents? I digress, so the writing is pretty bad, and then they cram in this love story. John Travolta, and Shania Twain. Never has a couple had less chemistry. Now the second movie starts, this movie is John Travolta returning to the track, racing and winning. In this section you find out Travolta's wife was killed in a car accident. Throughout the film there are a number of red herrings as to who was responsible. There are plot holes and sub plots that go nowhere, and they should have been cut to flesh out the racing seasons. Around 3/4 of the way through the movie I think they tied up the consultant and locked the writing room door, the on track action becomes laughable. The most interesting story line of Travolta making a comeback against his rival gets completely abandoned because of an accident. If you read this review, I'm going to apologize to you for ranting like a mad man. This could have been better, it should have been better. There is just so much wrong with it I could keep going all night, but I'm not going to give this terrible movie anymore of my evening. If you're a hardcore race fan you'll watch this, because you have to. If you're a casual viewer skip it.
25 people found this helpful

JESSICA KINGReviewed in the United States on February 24, 2019
1.0 out of 5 stars
Awful
Verified purchase
If I could give this zero stars I would. It was awful! The acting was crap. They clearly have never actually been to a late model race before making a movie. The plot was junk. If you are an actual late model racing family like us or just fans of the sport you will be throughly disappointed.
35 people found this helpful

Chris MillerReviewed in the United States on July 30, 2019
4.0 out of 5 stars
Worth the watch
Verified purchase
A lot of reviews did not like the movie. I figure the bad reviews came from racing teams that don't race with a budget. There are teams that race with deep pockets. Them teams count for about 10% of the racing family nation wide. But buying whatever you need and having somebody else put it on isn't real racing. The real racers are the ones that can't afford all the top line parts. Real racers are up till midnight damn near every night working on the car and then getting up for a real job the next morning. Real racing is when you build your own cars, build the engines, do the set up on the cars and take care of all the problems yourself. There is way more to racing then just going to the track and getting in a car to drive. The best times in my life has not been at the track. It has been in the shop with friends building something to be proud of knowing in my mind that I built the car and not just bought parts for somebody else to bolt on. Every track has two or three cars where money is not a problem. Sure, if you have the most money, you will win most of the races. If you take a driver that has deep pockets and put that driver in a 10th to 15th place car. Most chances they would not even make the top 10. Yes, you can out money another driver.
17 people found this helpful

WendySReviewed in the United States on June 12, 2019
1.0 out of 5 stars
Worst John Travolta movie ever
Verified purchase
I love him, but this movie is terrible! Don;t waste your money
19 people found this helpful

PamelaReviewed in the United States on August 4, 2019
3.0 out of 5 stars
Empty investment
Verified purchase
1st love John Travolta movies.
But yeah weird accent for Alabama.
(Probably spoilers ahead)
The movie is a bit choppy and it never felt pulled together.
I love cars, love racing, understand the mechanics and financials. So the difficulty of giving your all coming up short bc of money sucks. BUT... It shows... The second to last song at the end, Just a poor boy doing the best he can, BS!! It took his daddy selling an 80k car + a panhead motor to Buy a chance at winning that race!! Yes it takes money to make things happen!! That song was totally inappropriate (@ least that line it was).
Basically it didn't feel real and I was left feeling empty. 2+stars

Tallie365Reviewed in the United States on January 2, 2020
2.0 out of 5 stars
No thank you at the end for Stumpy's sacrafice for the greater good of Monroe racing
Verified purchase
The movie missed both the romance of sport and the romance of love. The cast was good but the writing and directing not very good. I wasn't invested in the climactic sporting moments as with great sports movies. Neither did I get a warm nostalgic feeling of an exciting summer night at the track. The Shania Twain character seemed to only serve as a device to provide back story to the viewer about the Travolta character. Their scenes together were boring and her role was a big zero. The son had the best potential role but only hit the surface with the dad and almost nothing with his wife. Her role was completely unmemorable. A missed Tammy Wynett moment for her. Overall, I think the movie tried to be too many things and didn't delve into anything deep enough for the viewer to really care about any of it. Kevin Dunn did a fine job playing a real good ole boy with an unrealistic name -Stumpy.
2 people found this helpful

Here KittyKittyReviewed in the United States on August 11, 2019
3.0 out of 5 stars
It was o.k
Verified purchase
This is not up to the level you expect from John Travolta. It wasn't awful but it wasn't great.The accents were not good, I do not care where supposedly they were from they did not help with the movie.Now days we are so mixed as far as race, accents etc...that sometimes it takes away when you focus on it and to me that is what it did. The movie tried too hard and did not flow. John's bearded all over beard was not a good look for him. He could have been well groomed and still played the part...trim up the beard.... Some cussing, no sex that I recall. Won't kill you to watch it but do not expect an A+ movie. I have seen much worse. Shania and John did not really gel....but for me his look was off compared to her...she was cleancut...he could have played the part of a grizzled fishing boat captain. So ..it is alright just don't expect what you expect when you see John Travoltas name.
2 people found this helpful

HM1SCWReviewed in the United States on May 7, 2019
2.0 out of 5 stars
disappointing
Verified purchase
This movie was disappointing for Travolta. Predictable story line, supporting actors were terrible...just overall a waste of time of time and money.
9 people found this helpful
See all reviews
Back to top
Get to Know Us
Make Money with Us
Amazon Payment Products
Let Us Help You
EnglishChoose a language for shopping. United StatesChoose a country/region for shopping.
© 1996-2022, Amazon.com, Inc. or its affiliates