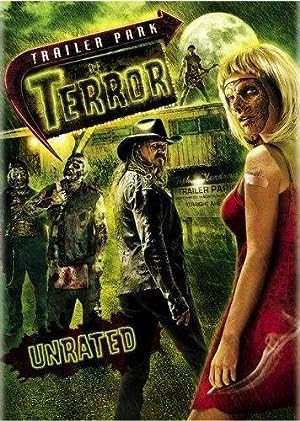 (316)
5.21 h 37 min2008R
A field trip turns deadly when a bus breaks down in a trailer park ruled by a redneck reaper with a small army of trailer-trash zombies.

WicingasReviewed in the United States on September 22, 2018
3.0 out of 5 stars
Humorous
Verified purchase
The humor carries this movie. It is supposed to be a zombie flick but it is more like a ghost story. The trailer park appears now and then to claim new victims. Personally, I had no sympathy for any of the characters, ghost zombie or victims, except for the young lady at the start...But that went away soon enough. The inhabitants of this trailer park are so foul that I did not care one bit when they and their trailer park were wiped out near the start of the film. No real horror. Some scenes of mutilation and torture. If not for the humor I would have tossed this flick.
One person found this helpful

The Pining PoetReviewed in the United States on March 27, 2017
5.0 out of 5 stars
I Smell Meat(Recommend to a friend)
Verified purchase
Great movie to enjoy with friends. I talked about this movie to some friends for years and when I finally saw that it was on amazon I had to buy it because sharing is in fact caring. Plot is not bad at all. It's no block buster but I didn't feel like it was playing into a cliché or that it was trying to be something other than what it was, a gritty what I would call "Slasher" movie. It's not overly suspenseful, but will give you a could of good laughs guaranteed. I will admit that I probably wouldn't show this to smaller children that you are concerned about content, however there are way worse movies out there that they could see. If you are one of those "The gore just doesn't look realistic" people you may not enjoy this either. it wasn't filmed with a Saw or Logan style budget so the gore is a little bit lower quality however it was great enough for me and my friends and there was plenty of it.

In the end I would have no problem wanting to watch this again.

Andrew LynchReviewed in the United States on October 15, 2012
4.0 out of 5 stars
Rednecks+Zombies=Slaughterfest
Verified purchase
I dont want to spoil it so ill just say its worth the money(i got it relativley cheap) but its got a sweet story,good acting and lets not forget GORE!!! Check it out you wont be disappointed.Pretty much a girl who is abused and mistreated by the freakish inhabitants of the trailer-park,Darla plans on leaving the park with a boyfriend but he gets killed by the inhabitants. Darla makes a deal with the devil & goes back for her much deserved revenge. Fast forward 30-40 years as the paper clippings in the news say missing people still not found. Well on rainy nights this "park" suddenly appears and entrances them in a sadistic game of perverse suffering & sin. It is all a part of the deal made with the devil,to take the souls of the sick,the weak & the only twist is the ending. That surprised me but hey it is cool. Gore galore,lots of adult graphic scenes and alot of zombie terror. Fun B splatter film with a good story.
One person found this helpful

JraptorReviewed in the United States on May 9, 2016
5.0 out of 5 stars
Must see B movie schlock (2 stars if you don't like the genre)
Verified purchase
Very surprising. I can see why certain people like it, heck, it's pretty much a must-see for fans of this type of B movie schlock. I bought it by accident and was going to get a refund but I decided to watch it. I am glad I did. I am one of those fans and I really liked it. It has a feel similar to Texas Chainsaw Massacre 2, which I also appreciate. Knock this down to a 2 star rating if you don't like this type of cinema. BTW the "porn" isn't that prevalent, it's more of a sin = death type of movie that goes a bit farther than allot of films do. Enjoy!
One person found this helpful

waas_sappeningReviewed in the United States on January 27, 2019
4.0 out of 5 stars
I smell meat!
Verified purchase
This is a silly movie about redneck zombies. I love it! If you have a sense of humor and like cheesy horror flicks, then you will love it too.
One person found this helpful

Sarah GroomReviewed in the United States on August 23, 2020
5.0 out of 5 stars
Top Notch Cult Classic
Verified purchase
Fantastic movie! I originally bought this on a whim years ago when big chain movie stores were closing. As a huge fan of horror movies especially B rated cult classics; this one will not disappoint. It has the essence of a Rob Zombie “House of a 1000 Corpses” feel with quirky tones of humor. A must see and collector movie!
One person found this helpful

M. BartelReviewed in the United States on September 14, 2012
4.0 out of 5 stars
Pretty darn good
Verified purchase
I was expecting to be let down again, since i had a few flops come my way... This movie is pretty darn cool. Seems the main complaint is that the people in the park aren't zombies. They are, but they aren't. They are the damned - much like 2001 maniacs. This is a story of someone basically selling their soul for revenge, and damning all in the trailer park. They are generally zombies and "do" eat people, it was mentioned a couple times. They can only be out at night though so they do not follow typical zombie rules. The movie is fun and gory with rockabilly flair. I have basically mentioned 2001 maniacs and that is mostly what this is like, so if you enjoyed that film - this is close to it.

SarahReviewed in the United States on June 4, 2014
5.0 out of 5 stars
I'm Just Weird
Verified purchase
In no way, shape or form is this like "one of the best horror movies I've ever seen". It came in the mail from Netflix, although no one in my house knows why because everyone says they didn't add it, but my mom and I watched it anyways. The reason why I gave it five stars, it scared the crap out of me. Not in the typical, jump out of your seat or scream way...this movie actually gave me a nightmare. I made the mistake of watching it again while I was house sitting for a family all alone at like 10pm. Not my smartest decision....
See all reviews
Back to top
Get to Know Us
Make Money with Us
Amazon Payment Products
Let Us Help You
EnglishChoose a language for shopping. United StatesChoose a country/region for shopping.
© 1996-2021, Amazon.com, Inc. or its affiliates