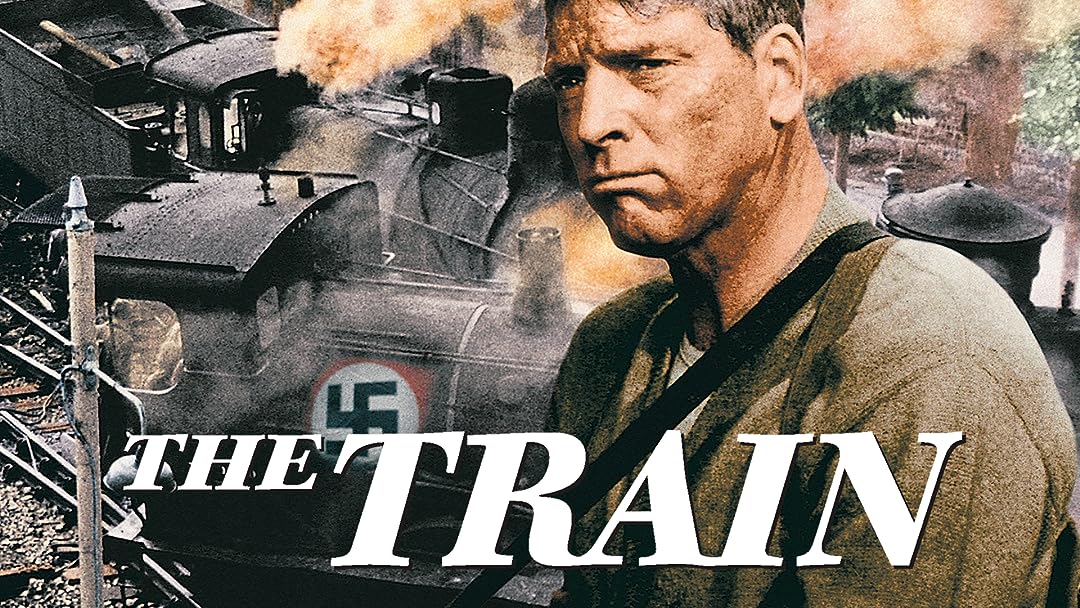 (469)
2 h 13 min196513+
Screen greats Burt Lancaster, Paul Scofield and Jeanne Moreau star in this suspense-laden tale of justice and retribution as a French Resistance fighter (Lancaster) attempts to stop a Nazi commander from looting the art treasures of Paris.

DavePReviewed in the United States on April 18, 2020
1.0 out of 5 stars
Not the original film version
Verified purchase
The free Prime Video movie is a bowdlerized version of the film, put together from alternate takes. The extraordinary tracking shot that opens the film is missing entirely, for obvious reasons: with a tracking shot that long the director gets one chance - if they have to cut, that's it, they splice something in and go on with it. So there can be no alternate take. I don't know what's going on with this, but I saw it first with a version of "Shane" showed on Starz. I have an old recording of this movie, and of "Shane", so I was able to compare them, though I know them both by heart. Is there anything great they can't find a way to turn into crppp?
28 people found this helpful

Stephen BookbinderReviewed in the United States on May 24, 2020
5.0 out of 5 stars
Remarkable filmmaking
Verified purchase
I have seen this movie several times. Each time I find it spellbinding. As a story one could call it an antiwar film full of heroes fighting for their culture and its highest creations . We see French resistance fighters exhausted from German Occupation who can not resist a last mission ,not for the physical preservation of their society but to preserve an important part of their national identity which was so important after the war.
But on closer inspection its the cinematography and directing ,the decisions where to put cameras and how to use them that puts this film in the upper echelon . The rhythmic sounds of the trains in the background are eerie signals of the inevitable march towards death and destruction. It benefits from being shot in Black and White as Frankenheimer knows how to control light and shadows for effect as in Burt's scenes with Jean Moreau.
One of my favorite actors (Burt Lancaster) does all his own stunts including a clinic on how to roll down a hillside . Throwing down his weapon at the end is symbolic .He no longer needed to resist anymore.
Is there a better ending pan shot in a movie than this one ? I havent seen one.

GabeReviewed in the United States on July 5, 2020
4.0 out of 5 stars
Amazing piece of work.
Verified purchase
Ok, first, this is a wonderful action movie. Not exactly Michael Bay in scale, but faaaaaar better in story and visual intensity. The difference between these two is that most of what Bay does is eye-candy with little depth, and this would be more like a gourmet meal. Burt Lancaster is obviously not French, and does not try to be, but his acting along with his fellow cast members is spot on. They have an intensity born out of having lived through a war and a lean-ness of spirit that reflects too many years of soul-crushing occupation.

It's the end of WWII in Europe and Nazis are fleeing France ahead of the Allies arrival, but being Nazi's, they decide to steal a fortune in valuable art by putting it on one of the last trains leaving for Germany. Not wanting their heritage to be stolen, the French Underground turns to Burt Lancaster, a French railroad station yard manager and leader of an ever-shrinking resistance cell. They just need to delay the train a few day until the allies arrive.

Movies like this are a time-stamp for history. What was important then, may well have become insignificant to us now. Most people born in this century have no idea what WWII was about much less why this movie would be important. But remember something. You had family living back then. Family that saw this as history, not fiction. When you watch, see how things looked, watch how people lived. Your great-great grandparents lived in this world.

Oh, and as you watch, remember that this was done nearly 60 years ago and it still holds up as a gripping story, even by today's standards.
6 people found this helpful

joanReviewed in the United States on May 17, 2020
5.0 out of 5 stars
Rivating WW2 film
Verified purchase
This has to be one of the best Burt Lancaster movies. Plus it gives the 52 year old Lancaster to show off his still impressive physical ability. Set in France during the very end of the war, this film deals with the German's theft of priceless art, They're trying to get the art back to Germany before the Allies overwhelm them in the last days of the war. It shows off the sacrifices of the French underground, who sacrifice their lives trying to stop them. Just watching Lancaster slide down a ladder on the soles of his feet and then jump onto a moving train are worth the rental fee. Watch it. And its a must for Lancaster fans...like me.
12 people found this helpful

Delta D.Reviewed in the United States on July 22, 2021
3.0 out of 5 stars
5* cinematography, 2* (or even 1*) narrative
Verified purchase
This film is worth watching for the cinematography alone. The beautiful nightime shots of trains clearly seem to be inspired by O Winston Link. The various train wrecks are captured most spectacularly. For those generations brought up after the demise of steam engines, the complications of driving these is well conveyed.

The narrative, alas, is decidedly old school, even by the standards of the mid-60s. The Germans are shown as both stupid and fanatical. The French, both men and women, are loyal patriots. There is not a single collaborator seen. Perhaps this point is realistic, given the time of the action. By August 1944, the Allies were very close to Paris and the German occupation was obviously close to an end.

The number of casualties suffered by both formal and informal members of the Resistance is horrific and the question is raised (and answered uneqivocally) about the justification for such losses, simply to preserve a priceless art collection.

There are some big names starring in this, although their talent is poorly served. Burt Lancaster is a kind of French Resistance Superman: highly intelligent, immensely brave, but with outstanding humane characteristics as well. His submachine gun seems to have an infinite supply of ammunition.

Paul Schofield's portrtayal of a Nazi colonel lacks any subtlety. He is cruel and fanatical and too stupid to recognise defeat.

Jeanne Moreau's talent is also put to little use. She has a surprisingly small role for an actress of her reputation. She performs it well, but is also given little chance to demonstrate subtlety.

I see no chance of my sitting through this long film again, although I might fast-forward through it, to enjoy the cinematographic highlights.
2 people found this helpful

EdmundReviewed in the United States on May 13, 2020
5.0 out of 5 stars
A somber and realistic war film
Verified purchase
Before there was The Monuments Men there was The Train. In short and in the final summary the film concludes with the unspoken question: "Which is more important- art or lives?" You can see that Burt Lancaster's character clearly thinks that lives matter much more than lifeless art and was all the efforts to stop the train worth the lives involved in halting it! When I was small I first saw this film and I was too young to appreciate its subtle meanings, instead I liked 'Von Ryan's Express' more, yet now as an adult, clearly The Train is the superior film- a classic indeed.
8 people found this helpful

joel wingReviewed in the United States on April 24, 2020
3.0 out of 5 stars
Good but not great WWII drama as the French try to stop the Germans from looting their art
Verified purchase
The Train starred Burt Lancaster as French resistance member Paul Labiche in this World War II drama. It was based upon real events as the retreating Nazis tried to loot stolen art out of France and back to Germany in 1944. The movie is about trying to sabotage the German effort.

The movie pits Labiche who is a train operator versus the Germans. Labiche tries all different methods to delay the train. Unfortunately, some of his workers get killed in the process such as when one train operator clogs up the oil supply in a train and gets caught and is executed by the Nazis. Labiche and his workers also have to worry about the Allies killing them as trains were prime targets for air attacks.

Overall, the movie is a good but not great drama. There’s not enough tension created in the movie to really keep it going, especially because so much of it takes place on a train. The ending though is very powerful as it highlights the sacrifices the French made to preserve their art and culture.
C
4 people found this helpful

Me2Reviewed in the United States on September 30, 2020
5.0 out of 5 stars
A Cause Greater than Self
Verified purchase
In desperate times some people just simply "step up" ~ knowing the risks and dangers. The French were war-weary, but the saving of irreplaceable art treasures called upon some Resistance members for one more mission. The moral question was raised by some: was it worth losing more lives to save some art works, valuable though they were? It goes without saying all human life is worthy!

But by choice, even having been decimated in number as the end of WWII seems near, the "remnants" (all THREE out of an original 18) of this resistance cell agree to take this mission.

Then they were joined by a chain of brave resistance fighters across the countryside who coordinated brilliantly to deceive the Nazis into believing The Train was slowly but surely moving from Paris to Germany (with the spoils of war, so to speak).

I loved this part of the story....seeing ordinary villagers (no matter the ages or genders) along the route carrying out their part of this effort; no where did any one of them break the chain. Each played their role to perfection..... All for One; and One for All.
In stepping up as they did some sacrificed their lives, bravely confronting the German soldiers.

Just as the USA put aside the mundane after 9-11 ~ we saw people, even strangers, coming together in ways that wouldn't have happened even days before that infamous morning.

Anyone with a love & appreciation of trains would have to like how much attention focused on trains; goodness in the age of coal-fired train travel, it was certainly a dirty job. But Lancaster was covered in soot, coal dust, oil, and whatever just about the entire movie.

Well done portrayal of WWII history if you're a history buff!
One person found this helpful
See all reviews
Back to top
Get to Know Us
Make Money with Us
Amazon Payment Products
Let Us Help You
EnglishChoose a language for shopping. United StatesChoose a country/region for shopping.
© 1996-2022, Amazon.com, Inc. or its affiliates