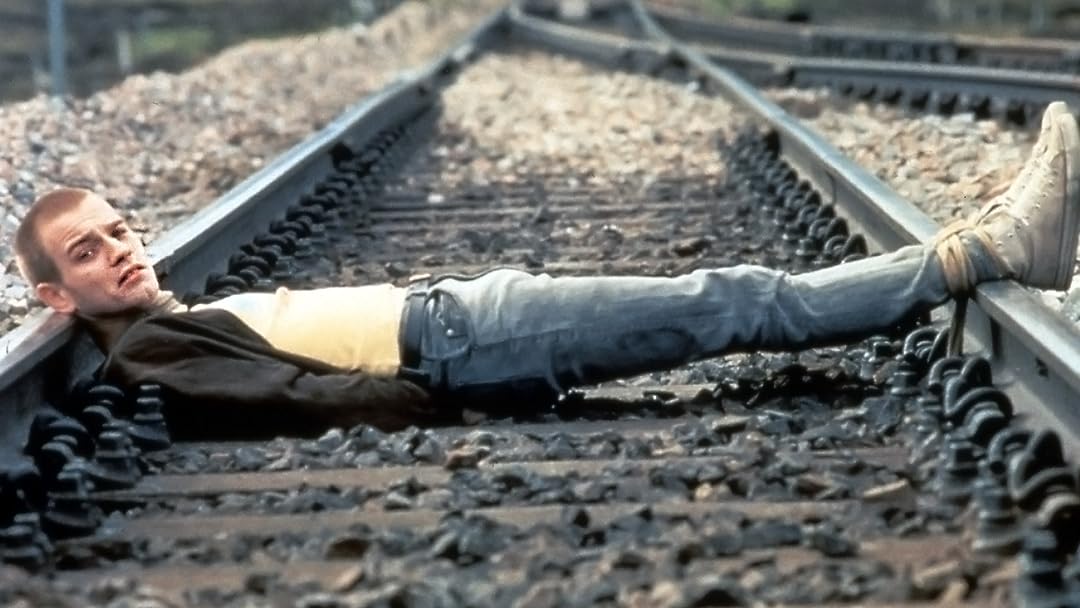 (3,139)8.11 h 33 min1996X-RayR
TRAINSPOTTING delivers a wild mix of rebellious action and wicked humor! It's the story of four friends as they try to make it in the world on their own terms...and who end up planning the ultimate scam!

JJ Dyn O Mite!Reviewed in the United States on May 27, 2018
5.0 out of 5 stars
Beware of the different releases.
Verified purchase
Great film. That is not in question. If you want a review of the film, read others' reviews. My issue is the multitude of purchase options. The one you want is the "multi-format". This has English SDH subtitles. The "blu-ray" option has a Canadian rating on the front, French on the inside cover, no main menu and no subtitles. I watched a few clips and they all seem the same quality. However, I can barely understand some of the dialogue without subtitles. The very reasonable pricing makes returning the accidental purchase not worthwhile. So, $10 in the trash.
26 people found this helpful

joel wingReviewed in the United States on December 13, 2020
4.0 out of 5 stars
Part youthful romp Part nihilistic drug abuse
Verified purchase
Trainspotting was one of Danny Boyle’s best films. It’s based upon a group of friends in Edinburgh, Scotland. On the one hand it shows the fun they had and the crazy situations they got into. The other part is rather nihilistic as they are heroin addicts and criminals.

The light moments are what really stand out. They shoot a dog at a park with a pellet gun to see it attack its master. They watch their psychotic friend Begbie (Robert Carlyle) start a fight at a club. They walk into a retirement home and steal the TV. If not for the comedic moments you really wouldn’t want to watch the rest of this film. That’s because the low points are really low and all involve drugs. It’s quite an extraordinary mix and is what makes this movie stand out.
C

Basil N.Reviewed in the United States on May 11, 2015
5.0 out of 5 stars
Hilarious, Raw, and Disturbing... It’s Magnificent!
Verified purchase
Trainspotting is an unusually realistic movie. There’s no sugarcoating as it presents the awful truths of drug abuse and addiction. It’s a nasty brutish tale told through the legitimate and uplifting context of youthful exuberance. Because that’s how drug addiction works, you have to be youthfully strong (or at least stubborn), hopeful, and naive to stay on such a losing path. The result is a story of dark humor and hilarious ironic mirth as we watch a horrifying march to bad ends. This is some of Ewan McGregor’s earliest work, and it’s Kelly Macdonald’s first film. Both are beautiful and brilliant, glowing with youth that blithely explains bad life choices. Robert Carlyle plays a psychopath who bizarrely fits into his low society so well that he becomes something of an older and wiser mentor to his “mates” who pump heroin into their veins. The whole film is a glorious saga of a social train wreck. The only shortcomings of Trainspotting are practical. The film is set in Edinburgh, so nearly everyone speaks in thick Scottish accents. Be prepared to rewind and read captions in some critical scenes. And of course, be prepared to be disgusted, because heroin addiction is disgusting. Trainspotting is funny and smart, lyric and poignant, thoughtful, exciting with an incredible soundtrack (including Iggy Pop’s Lust For Life), enthralling, and even somewhat hopeful in key scenes (possibly including the end). But the overall impression is disgust and despair at lives wasted. True stuff. Watch this movie.
32 people found this helpful

SpeedeeReviewed in the United States on April 22, 2017
5.0 out of 5 stars
Eye opening
Verified purchase
I did not see this movie when it came out originally, 20 years ago, because it seemed to be marketed so specifically to people who identify with heroin use. (Not my thing.) However, I have recently seen a trailer for the sequel, Trainspotting 2, and I was intrigued so I thought I would give the first installment a try. Glad I did. It is more of a cautionary tale than I imagined it would be, and did not at all idealize drug use. In fact, it was unflinching in its depiction of the nightmares that result from addiction. It was an eye opener for this admittedly naive woman.
4 people found this helpful

BWilsonReviewed in the United States on September 30, 2019
5.0 out of 5 stars
Does NOT get any better
Verified purchase
A timeless drug induced fairy-tale, if you please. Not for everyone, but if you are brave enough, Trainspotting will deliver all of the glory and horror of drug addiction. ALL of it.
4 people found this helpful

MattReviewed in the United States on November 5, 2020
2.0 out of 5 stars
This is NOT the directors cut
Verified purchase
I got the Canadian DVD / Bluray combo. It says it is the director's cut, but it is not. It is the standard edited Canadian version. AS far as I can tell the only actual director's cut out there is the original Miramax DVD and that's it.
One person found this helpful

Mary B CantoralReviewed in the United States on November 14, 2001
5.0 out of 5 stars
a work of art
Verified purchase
Trainspotting is an extraordinarily well crafted film in terms of the various elements of film technique- lighting, sound, acting, screenplay, dialogue, color, composition, camera and editing.

The theme is fresh. Youth is a stage that is fraught with danger in testing the waters, and rites of passage, a stage that in modern western culture has no prearranged stage or ceremony.

Neither are there role models nor family. The parents are out to lunch although they do their best- who doesn't? Volatile, sensitive Youth is for all practical purposes alone, dangerously alone, with no boundaries or self-control. Renton, our hero, does heroin. His unsavory pal does liquor and people. Self-afflicted damage vs damage to others is an under current theme of Trainspotting. Money is everywhere, as are drugs, those of discontent housewives, and those found in bars, as well as illegal ones. Self-medication is rampant, stylized (not glorified) in the film.

Brilliant color schemes and set design hark back to Kubrick's A Clockwork Orange yet add something new and different. Neglect of youth is generational and a threat to young life and society. Theme is brilliantly expressed via the superb acting of Ewan MacGregor and all the others. Nothing is left to chance, no detail too unimportant to convey, in the brilliant directing work of Danny Boyle.

The editing conveys the restless pace of angst-ridden young heroin addicts, along with the brilliantly selected score by Bowie and Iggy Pop, and Lou Reed, among others. In the opening scene alone, all the elements of film work together to present theme and introduce characters: Renton colliding with a moving car, grinning with bold mischief when he realizes he has triumphed over death; Sick Boy and Alison swooning with ectasy when they shoot up, the gaudily colored set vs the reality of the shabby drug house and neglected baby of young parents who are too busy trying to escape from reality to care for the one they love the most.

All is incredibly and expertly choreographed to Bowie's and Iggy Pop's title track. Even the voice-over narration by Renton works remarkably well, a feat in and of itself, given the sorry track record of most film narrations. This is a tragic story, and far from "glorifies" hard drug abuse. It is also rich with blackly humorous dialogue, acting and camera work- the "worst bathroom in Scotland "scene, for instance. The film is visually stunning, poetically inspiring and meticulously directed. And it raises a few more questions about the values of society than it answers, which is what any decent work of art should do.

AMPReviewed in the United States on April 8, 2008
4.0 out of 5 stars
Spot On, Trainspotting
Verified purchase
The Good Things
*Great photography style and quality. Every scene is fascinating.
*Interesting group of characters, with lots of interesting and memorable moments.
*Good dialogue (and good monologues).
*Very interesting, broad view of the issue of drug addiction. It accurately captures the good and evil of it. It is a little thought-provoking.
*Has some funny parts and some sad dramatic parts.
*Excellent soundtrack.

The Bad Things
*A couple of really gross scenes (one involving the worst toilet in Scottland, and the other involving flying feces).
*Accents are intense, almost unbelievably so.
*Some extremely wierd parts.
*Pretty wierd plot.

Stylish and hip, this film is never dull. It is filled with memorable scenes and dialogue. The characters are mesmerizing. At its core, this film approaches the issue of drug addiction objectively, revealing both the good and the bad that it perpetuates. Altogether, it's a very interesting portrayal. Anybody who is interested in this kind of material should check this out.
2 people found this helpful
See all reviews
Back to top
Get to Know Us
Make Money with Us
Amazon Payment Products
Let Us Help You
EnglishChoose a language for shopping. United StatesChoose a country/region for shopping.
© 1996-2021, Amazon.com, Inc. or its affiliates