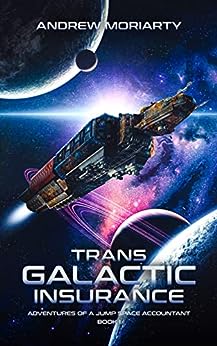 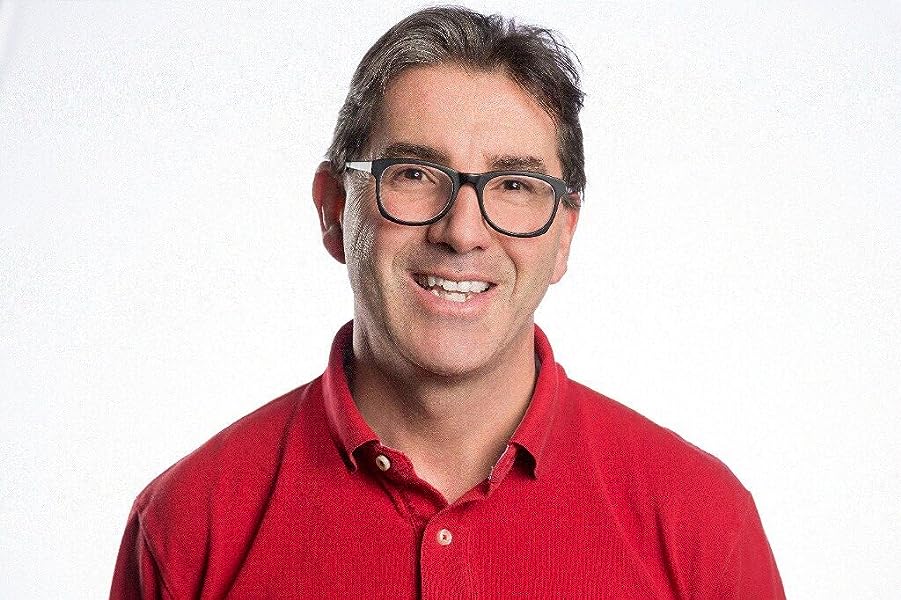 by Andrew Moriarty (Author) Format: Kindle Edition
Book 1 of 4: Adventures of a Jump Space Accountant
See all formats and editions
Sorry, there was a problem loading this page. Try again.
The Galactic Empire disappeared a lifetime ago. Jake Stewart doesn't care, he needs to earn a living. He fled his station in the outer Belt, enrolled in the merchant academy, and snagged a scholarship. The future looks bright. But a crooked boss, some paperwork shenanigans, and a freeloading best friend put him in a bind. When he's accused of a murder he didn't commit he goes on the run from the Planetary Militia. There's only his wits and a suspiciously helpful pretty girl between him and jail. Can he trust her to prove his innocence? Or does she have another agenda?Tired of books where everything that moves gets shot? How about a book where people use their brains? If you like strategy over tactics, and thought before action, The Adventures of a Jump Space accountant series is for you.
Read more
Previous page
Next page

Andrew Moriarty has been reading science fiction his whole life, and he always wondered about the stories he read. How did they ever pay the mortgage for that space ship? Why doesn’t it ever need to be refueled? What would happen if it broke, but the parts were backordered for weeks? And why doesn’t anybody ever have to charge sales tax? Despairing on finding the answers to these questions, he decided to write a book about how space ships would function in the real world. Ships need fuel, fuel costs money, and the accountants run everything.

He was born in Canada, and has lived in Toronto, Vancouver, Los Angeles, Germany, and Maastricht. Previously he worked as a telephone newspaper subscriptions salesman, a pizza delivery driver, wedding disc jockey, and technology trainer. Unfortunately, he also spent a great deal of time in the IT industry, designing networks and configuring routers and switches. Along the way, he picked up an ex-spy with a predilection for French Champagne, and a whippet with a murderous possessiveness for tennis balls. They live together in Brooklyn.

4.3 out of 5 stars
4.3 out of 5
368 global ratings
How are ratings calculated?
To calculate the overall star rating and percentage breakdown by star, we don’t use a simple average. Instead, our system considers things like how recent a review is and if the reviewer bought the item on Amazon. It also analyzes reviews to verify trustworthiness.
Top reviews

Ghost Ride the Whip
4.0 out of 5 stars This one, right here!
Reviewed in the United States on April 1, 2018
Verified Purchase
I hate to say I don't read sci-fi because then you think my review is worth a d*mn, so let's say I stopped reading sci-fi because it was formulaic and tedious. Plus three breasted alien women...sigh. How crazy a space accountant was NOT tedious or following formulas? I know, right? This book was well-written, funny, fresh and I read it straight through. I am really looking forward to the next one. So pleased to find a new author to follow!
Read more
26 people found this helpful
Helpful
Report abuse

ToldYouSo
5.0 out of 5 stars What a wonderful surprise! Spend the money.
Reviewed in the United States on May 22, 2019
Verified Purchase
I thought this book might turn out to be silly or lightweight from the title and the marketing blurb. Still, it was available on ‘Kindle Unlimited, so it cost me nothing extra to try it. This book is fun to read, but it’s not slapstick humor; in places it’s satire and makes great use of current topical subjects as if a parallel occurred in the future.occurred in the future. The protagonist is resourceful and very smart, but doesn’t have a lot of self-esteem or confidence. Most of the humor is situational, but it works.
The plot is more complex than I had expected. The tale takes some very unexpected turns. There are lots of places where you wonder how Jake is going to get out of his current jam. There are bad guys and good guys, but it’s not always clear who’s really wearing the white hats or the black. Or even the gray.
The author is certainly qualified to write about life in space. Moriarty was born on an Asteroid, on RIM 37. He has held many different jobs. The book is especially enhanced by his detailed descriptions of life in Zero G or Low G environments. The detail in this series certainly showcases his knowledge of a wide range of skills, among them shipboard electronics, propulsion, cargo handling, accounting, and trading. Morality’s life experiences help bring this book alive. His understanding of physics seems innate, as well as his ability to explain things to we ground pounders.*
After I read this for free, I bought it. Then I bought the next two. At $2.99 for this book, why not keep it in my library for re-reading? This series reminds me somewhat of the great Terry Pratchett’s books. Moriarty’s protagonist, Jake Stewart, could someday grow into a pair of magnetic boots for Low G environments that could challenge Commander Vimes’s boots.

*So maybe I made that paragraph up, but his details in this series of books makes you almost believe this could be true.

Dr.Gonzo
4.0 out of 5 stars 4.5 Stars; A Fun Look At A Different Side of Space Travel
Reviewed in the United States on April 7, 2018
Verified Purchase
This story was much better than it had any right being. I mean, how interesting could a story about space insurance and cargo ships be? Turns out its a fun read.

The protagonist was likable, the world building was interesting and credible, and the plot engaging. There are some twists in the story but I found it easy to follow and not overly convoluted. The ending was satisfying and realistic in terms of the story.

Some Average Guy
5.0 out of 5 stars Excellent short space trader/smuggler story with lots of turns.
Reviewed in the United States on December 12, 2017
Verified Purchase
This story is very similar to Alan Black's style of space books in that you have a main character that is a bit naive but hard working with skills/creativity/insight. It's about space trade/insurance/smuggling. Who's good/bad/grey doesn't really get revealed till the end which is nice. The story is very short but a lot was packed in and I was satisfied the author completed the tale. No wasteful long-winded descriptions or such. Just concentrated story from page first to page last.

It's not perfect or deep. Just a light fun read with a trader / coming of age slant. No glaring issues. Sets up a solid main character for future books as well if that's what the author intends. Good enough I would pre-order a future book in this universe.
Read more
12 people found this helpful
Helpful
Report abuse

Librovore
5.0 out of 5 stars A fun (and realistic) take on non-heroes that reminds me of Catch 22
Reviewed in the United States on July 1, 2021
Verified Purchase
As is often the case these days, I ramble through the lists of novels looking for my next sci-fi fix. After I'd read about a quarter of "Trans Galactic Insurance", I came back and bought the remainder of the set (currently at four). The characters are very believable and the plots are humorous in that way that makes you shake your head and wish for some sanity in the world. Placed in a future solar system where communication has been lost with the central worlds of an empire and a society is beginning to slowly collapse due to economic and social pressures, the thread over the books follows Jake Stewart during his time in college, where his naivety causes him to land in a lot of trouble that his intelligence and attention to detail, doused with a whole lot of luck, get him out of. In this world, it's not the guy who can shoot straight and punch hard who wins, it's the guy who understands the legal fine print--though he still doesn't get the girl.

Plot and pacing are very good, the characters will have you thinking of people you know, and the dialog is fun and entertaining. Editing/proofing is excellent. A really enjoyable series that reminds me of "Catch 22".
Read more
2 people found this helpful
Helpful
Report abuse

Stella C.
4.0 out of 5 stars Quirky, humorous and fun
Reviewed in the United States on August 14, 2018
Verified Purchase
Trans Galactic Insurance: Adventures of a Jump Space Accountant is a short story by Andrew Moriarty.
What a story! It is quirky, humorous and fun, and it is all about space insurance and cargo ships.
With a likeable main character, a cast of interesting supporting characters, an engaging plot, action, adventure, and unpredictable twists, it does keep the reader guessing throughout the book.
Well written, with a different concept, it starts off a little slow, but the pace quickly picks up and soon develops into a fast moving plot. There is good character development as the story unfolds and it ends on a satisfying note.
The accounts in space will never be the same again. Recommended!
Read more
9 people found this helpful
Helpful
Report abuse
See all reviews

Paulux
4.0 out of 5 stars Nuts and bolts of sci-fi
Reviewed in Canada on January 2, 2020
Verified Purchase
If intergalactic wars, aliens with trunks and antennas who speak english and crazed emperors aren't your thing, then maybe this type of sci-fi fiction is. No intergalactic wars (though some mayhem), inept hero, day-to-day problems and resolution and no aliens, just humans trying to get adjusted to the new reality: for a reason unknown, Earth has abandoned the outbound colonies. Jake, the hero, is sometimes way too inept, but i enjoyed the thought that went in the details of how this universe works on a day-to-day basis (low-grav, tasteless food goo, patch-up technology...) If you enjoyed the Quartershare series by Nathan Lowell, you are in for a nice treat. This book is the first in the series where Jake manages to be the first Belter ever to attend the Academy and become ideally a pilot, but maybe «just» an accountant. It is followed by Orbital Claim Adjuster.
Read more
One person found this helpful
Report abuse

Kindle Customer
5.0 out of 5 stars But of fun
Reviewed in Australia on March 7, 2020
Verified Purchase
A cerebral action adventure. There is lots of action but it is a bit tame. The tighter end was working out who was the villain.
Jake is quite dimensioned the others no so much but it easy, compelling reading.
Read more
Report abuse