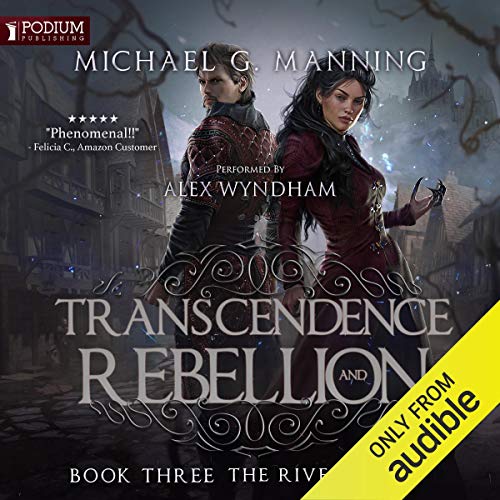 The world is on the cusp of destruction as Mordecai’s power grows beyond the limits of his own control, yet most of the powers that rule the world are oblivious. The only hope of salvaging their civilization lies with his children, but they have been scattered and branded outlaws. Meanwhile Tyrion continues to march toward his own goals, heedless of whether they will help or harm their efforts to stop the apocalypse, as even the Queen begins to doubt the archmage’s sanity.

Mordecai is trapped by his own strength, a power too great to wield. Can his children stop the end of everything, even if it means sacrificing their father?

Felicia C.
5.0 out of 5 stars Phenomenal!!
Reviewed in the United States on June 11, 2019
Verified Purchase
I rarely feel moved to write a review for a book, despite the fact that I have read so many fantasy series that I find myself picking through Amazon and Audible for a hint of a good series. Boy did I hit a home run with Michael G Manning and his Illeniel world. By the end of my journey with Mordecai, Penny, and his family and friends, Tyrion too, I felt as if I fit right in their little circle and loved each and every character, even if I was supposed to hate them. Every known emotion came front and center with this book, everything from elation to despair, I felt everything the characters did and then some.
To be honest, at times while reading this book I wanted to throw my Kindle across the room, but I couldn't stop reading long enough to do so and by the end of the story, I was ugly crying with a big stupid grin on my face. I can't say enough good things about this series. The ending was just as brilliant as the beginning. Kudos to you, Mr. Manning, can't wait to see what else you have in store for us Illeniel lovers.
Read more
18 people found this helpful
Helpful
Report abuse

GALE
5.0 out of 5 stars EXCITING CONCLUSION to a well loved series!!
Reviewed in the United States on June 10, 2019
Verified Purchase
Michael has concluded the Illeniel series like the grand finale of a glorious fireworks display!!
So many plot twists had me holding my breath and biting my nails! I cried both tears of sadness for the lost ones and tears of joy for the ones that were reunited.
Michael masterfully manipulates every emotion possible to bring you on the roller coaster ride of a lifetime. And through it all Mort and Chad never fail to make you laugh.
I'm really going to miss these characters that have become like family to me over the past years. That being said, I cannot wait to see what Michael has planned for us in his next series. I'm confident that he will create another cast of characters the we are going to fall in love with or love to hate.
Read more
10 people found this helpful
Helpful
Report abuse

BC1130
4.0 out of 5 stars 3 1/2 stars for story telling and a satisfactory end to the series
Reviewed in the United States on June 22, 2019
Verified Purchase
When I read the first book in this epic tale, The Blacksmith's Son, in the first series, The Mageborn, which introduced the central character, Mordecai, the amateurish writing and poor editing put me off. However, I try not to judge a book by those things -- unless they are overwhelmingly irritating. I focus on the storytelling, the characters, the plot, the pacing, conflicts, conclusions, etc. While it is a simplistic story filled with tropes, and it needed improvements in those basic elements of story telling, the overall story held my interest and made me want to read the sequel.

Now, the story of Mordecai ends with Transcendence and Rebellion. The lack of editing was consistent through the books, but the writing style has improved. Most important to me, the characters developed, the plots and conflicts built, and Michael G Manning told an excellent story with a beautiful, emotional and satisfying conclusion.
Read more
2 people found this helpful
Helpful
Report abuse

Jay
5.0 out of 5 stars Wow just wow
Reviewed in the United States on June 10, 2019
Verified Purchase
This is probably the most satisfied I’ve ever felt with regards to closure after reading the final book in a loved series. The author did a fantastic job. Who lives , who dies? You’ll need to read to see but it isn’t disappointing and wrapped in a story that is very believable from Mordecai. Great book
Read more
7 people found this helpful
Helpful
Report abuse

Brandon Faulkner
5.0 out of 5 stars Bittersweet
Reviewed in the United States on June 10, 2019
Verified Purchase
This series has been a rollercoaster of emotions for me. I am happy to see it come to an end and sad to say goodbye to the characters that I have gotten to know over the years.
After reading through the first time I could not help but lose sleep to keep the pages turning. It is as intense as I could have hoped for.
Like any great story I was shocked, excited, happy, sad, and some times disappointed with how something turned out. Frequently those emotions would hit at the same time.
I highly recommend this book and the series as a whole.
It was well worth the wait.
Thank you Michael G Manning!
Read more
7 people found this helpful
Helpful
Report abuse

M. Stewart
1.0 out of 5 stars Deleted book from library- offensive
Reviewed in the United States on March 4, 2022
Verified Purchase
Author’s voice has changed and content is offensive. It is not of same range as the original series I loved. He was generous enough on a different series to Preface that there was harsh content, but that warning wasn’t given on this one. I deleted book 2 and three from my library and cannot recommend. While I would like to see his family stories, the story material is too offensive to give of my limited time on earth. Very disappointed and wish it was different as I loved the first series.
Read more
Helpful
Report abuse
See all reviews

MJR-73
5.0 out of 5 stars A must read if you've been following the series.
Reviewed in the United Kingdom on August 29, 2020
Verified Purchase
So many times authors can write a brilliant story only to be let down at the ending - not so here. If you've got this far then we all know, and love, the characters that Michael has crafted throughout the series and reading the Epilogue, knowing this was the end, was emotional.

A superb series of books that are well written, easy to read and bring to life a wonderful story, as others have said, full of love and tragedy without getting bogged down with gruesome detail.

I wouldn't hesitate to recommend these books to anyone with an interest in the fantasy genre, even if they were new to it or trying it for the first time.

Thank you Michael G Manning for introducing us to Mordecai Illenial and sharing his life with us.
Read more
Report abuse

T. Field
5.0 out of 5 stars Brilliant book. Great ending.
Reviewed in the United Kingdom on June 17, 2019
Verified Purchase
I didn’t go into this book knowing it was the last in the Mort series, so got worried towards the end the author was going to keep dragging out the series beyond its lifespan.

I’m glad to say I was wrong.

The book itself is well paced with enough action to keep you reading. The finale is fast paced with real consequences, and calls back well to all the work that’s come before it.

And finally the epilogue was a masterpiece. It gives the reader the closure you need without spoiling the characters by having them do something, well, out of character.

An easy 5 star to give, and I can’t wait for the new series to arrive.
Read more
One person found this helpful
Report abuse

NxNxNxN
4.0 out of 5 stars Great book - onto the new series!
Reviewed in the United Kingdom on June 10, 2019
Verified Purchase
This book wraps up things very well with the Mordecai storyline(s) and sets things up for a new series, like the other books it is full of tragedy, love and action. I thoroughly enjoyed the book but I only gave it 4 stars as I felt it meanders a little too much in places with the plot and it also felt quite hasty in other places - but that doesn't stop it from being a great book and a fitting end for the series.
Read more
One person found this helpful
Report abuse

M. Paton
5.0 out of 5 stars Mourning the loss of loved characters and the end of a fantastic series
Reviewed in the United Kingdom on June 16, 2019
Verified Purchase
I loved/hated this book. MgM pushes his readers into uncomfortable areas, but has a redeeming quality of lightening the darkest moments with unexpected humour. I have followed Mordecai from the beginning, and am sad to see the closure of this very weird and wonderful series. It’s been an emotional ride from the start, and no less so at its conclusion. Michael Manning ended this book with an epic Bang!
Read more
Report abuse

Piperman
5.0 out of 5 stars Saddened to see the series end.
Reviewed in the United Kingdom on June 12, 2019
Verified Purchase
One of the best series of books I have ever had the joy of reading. And not once did micheal g Manning's books disappoint. Literally the perfect ending, as bittersweet as it was.
Eternally grateful for the world he shared with us and the characters I've since fell in love with. I'll genuinely miss all the worlds within.
Read more
Report abuse
See all reviews