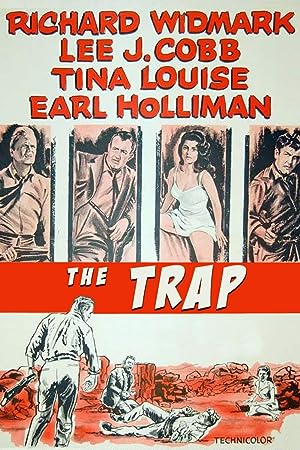 (68)
6.71 h 23 min195913+
A lowlife thug, Ralph Anderson (Richard Widmark), returns home in an attempt to hide his mob boss from the law. Ralph's father, who is the town's sheriff, is killed by the mob boss' minions while they await rescue. This galvanizes Ralph who then sets out to bring the mob boss and his men to justice.

A. Film LoverReviewed in the United States on May 11, 2021
4.0 out of 5 stars
Getting trapped in The Trap
Verified purchase
For the "reviewer" here who said that had Norman Panama made any other good films this might be better known - try researching Mr. Panama and Mr. Frank, then maybe you'll know how wrong you are. If the team had made nothing but The Court Jester they would be in the pantheon, but add to that all their classic Bob Hope comedies, plus the film that followed The Trap, Li'l Abner and their filmography is rife with hits.

What's unusual for the team is that The Trap is not a comedy. It's a total departure for them and considering that it works reasonably well for the programmer it so clearly is. Widmark is always great, Tina Louise was fresh from the Broadway musical Li'l Abner, and Lee J. Cobb is clearly having fun as the villain. Poor Earl Holliman does what he can with his irritating character. The score is cobbled together by Irvin Talbot from various Paramount composers' other scores (much as he did with I Married a Monster from Outer Space) and it works okay. What was most interesting to me was that this is the only Paramount film from this era that wasn't filmed in VistaVision, at least that I know of - I'm sure there may be others, but it was a real surprise not to see the logo.

The transfer is what you'd expect from Olive - they were given whatever Paramount had laying around. The color's a little dreary, and the source material is mediocre. For some stupid reason, Olive gives you both 1.85 and open matte versions. Of course, the 1.85 is the film's ratio and the open matte is clearly a joke - you could drive several trucks through all that unnecessary headroom.

CorsoReviewed in the United States on January 20, 2017
5.0 out of 5 stars
Trapped Three Ways
Verified purchase
A surprisingly good movie for time at which it was made. It has all the elements of a fine crime thriller - crooked lawyers, mob clients running from the law, small town honest law enforcement, family drama and crisis, love and forbidden love, murder, mayhem, and such a very, very dry choking landscape that we recommend you bring some cold drinks while watching. And who but the boomers would ever know that was Tina Loiuse? No sNaPp-CRacCkLle-PoP rocket science here but a good steady tension and pace to the very last scene - the photo itself is worthy of its own chapter.
7 people found this helpful

OLDNHAPPYReviewed in the United States on October 4, 2013
5.0 out of 5 stars
Richard Widmark is outstanding as always
Verified purchase
I have quite a few Richard Widmark movies on DVDs and none have dissapointed me.A seemingly bad boy forced to come back home.(Have you all seen Ginger on Gilligan's Island?) Tina Louise (Ginger) doesn't look the same as in the island,but she is very beautiful and has a great shape, and is caught in between one love and another.Why this actress did not make more films (dramatic roles) I don't know,but I wish she had.This is a great story of one against some tough odds and the ability to resist easy money.Even if you can,will you be able to make your destination (against the mob?Hmmmm.) I loved this sory.
13 people found this helpful

R. DagsReviewed in the United States on November 2, 2020
5.0 out of 5 stars
Richard Widmark
Verified purchase
Movie was delivered quickly and in excellent condition
One person found this helpful

NICOLASReviewed in the United States on August 2, 2015
4.0 out of 5 stars
Highly recommended. Had director Norman Panama made some other really ...
Verified purchase
Highly recommended. Had director Norman Panama made some other really great movies, or lthe screenwriter who helped write it with Panama, I think that the film would be famous. A modern day Western, somewhat I would say in the mode of Bad Day At Black Rock. Too bad that they did not film in in a wide screen format. Widmark and cast are excellent, though I think that the moral heart of the film focuses on Clu Galagher's character. the idea of money as the root of evils certainly does pertain to him. First in trying to get the bad guy for the reward money, and finally even possibility of betrayal if the bad guy does pay you with money. But Richard WIdmark's character is really not to much different, as he is apparently a lawyer who did not want mind representing criminals as portrayed by Lee J Cobb, and a pre Bonanza Lorne Greene, but now shows regret in his pursuit to show his father perhaps that he was a success. A really good movie.
5 people found this helpful

Robert MorrisReviewed in the United States on September 7, 2015
5.0 out of 5 stars
Great movie!
Verified purchase
Great movie!!! Excellent transfer, only one complaint: no subtitles. So, if your hearing is so-so you have go back sometimes. Other than that no problem.
4 people found this helpful

P.O.Reviewed in the United States on August 5, 2017
5.0 out of 5 stars
Very good movie!!
Verified purchase
Very good movie. Plenty of action from start to finish. Widmark and every actor were excellent with this film!
2 people found this helpful

Philip MignanelliReviewed in the United States on August 2, 2021
5.0 out of 5 stars
Widmark is sublime!
Verified purchase
Fantastic film noir! I am a huge Richard widmark fan and had never see this film! Highly recommended! 🙋‍♂️🤩
See all reviews
Back to top
Get to Know Us
Make Money with Us
Amazon Payment Products
Let Us Help You
EnglishChoose a language for shopping. United StatesChoose a country/region for shopping.
© 1996-2022, Amazon.com, Inc. or its affiliates