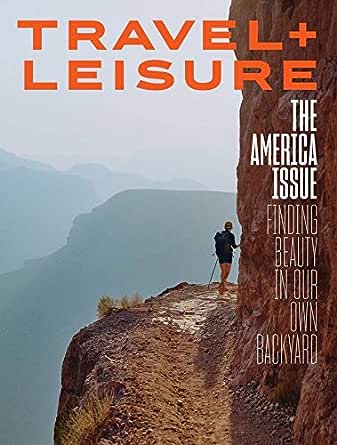 Enter your mobile number or email address below and we'll send you a link to download the free Kindle App. Then you can start reading Kindle magazines on your smartphone or tablet - no Kindle device required.

It's time to have an adventure. Travel + Leisure magazine will inspire you to make time for what matters most- vacation! This popular travel magazine has everything you need to plan, book and enjoy your next vacation to any destination. Explore tropical islands, scenic mountains and golden rolling plains in the pages of this magazine. Subscribe to Travel + Leisure for news and information on popular travel locations, must try overnight accommodations, leisure activities, attractions, dining and more. You'll learn everything you need to know to become an informed traveler, making sure that you get the most out of your vacation.

4.4 out of 5 stars
4.4 out of 5
1,214 global ratings
How are ratings calculated?
To calculate the overall star rating and percentage breakdown by star, we don’t use a simple average. Instead, our system considers things like how recent a review is and if the reviewer bought the item on Amazon. It also analyzes reviews to verify trustworthiness.
Top reviews

s87
2.0 out of 5 stars High End Travel Only
Reviewed in the United States on February 15, 2016
Verified Purchase
I feel like this magazine has really taken a poor turn with their new editor. In the past I enjoyed the articles and various product recommendations/tips a great deal, now the magazine seems focused entirely on extremely high end travel. If you are able to stay 5 star hotels, each constantly at Michelin Star restaurants and always flight First Class then this magazine should suite you very well, otherwise it will only fuel your travel fantasies.
Read more
120 people found this helpful
Helpful
Report abuse

Karen J.
3.0 out of 5 stars Too rich for me.
Reviewed in the United States on June 13, 2017
Verified Purchase
Travel and Leisure is a great magazine which is geared more to the rich who have no limit on what they spend on vacationing. The cover more exotic places than I will ever be able to travel to. I often find myself trying to find where in the world the place is they are covering. They often say the name of the city but then don't clarify what country they are covering. It is too confusing for me and I normally skim through the magazine and throw it to the side.
Read more
73 people found this helpful
Helpful
Report abuse

WilliamT
3.0 out of 5 stars Some lovely places to see but pricing of destinations is a bit lofty
Reviewed in the United States on May 7, 2020
Verified Purchase
This magazine has some beautiful photography and I enjoy many of the articles. The one thing that seems off about it is that the hotel/lodging pricing that is focused on is rather expensive. I travel a lot more than the average recreational traveler and when I find hotels in Travel + Leisure I am always shocked at the prices. It is rare to see anything under $500 a night which is ridiculous in my mind. If you want something to read that is beautiful and to encourage dreams this is a great travel magazine. If you are of average income many of the concepts will only be dreams.
Read more
21 people found this helpful
Helpful
Report abuse

Michaele
1.0 out of 5 stars Unclear subscription
Reviewed in the United States on February 12, 2019
Verified Purchase
I thought I was getting a magazine in the mail I misunderstood and I was disappointing.
Read more
19 people found this helpful
Helpful
Report abuse

JED
1.0 out of 5 stars Limited shelf life, shady practices, and unresponsive customer service
Reviewed in the United States on February 17, 2013
The magazine is nice enough in an aspirational sort of way. I do well financially, but even for me, the endless parade of super-luxe, oligarchy-level escapes becomes relatively pointless. One only gets so much time off - you could read the condensed guide to the top destinations and have more than enough to chew on for a few years. Much of the rest here is fluff - glossy advertising, cutesy puff pieces & tips, etc. Escapism, which is fine if that's your bag and you have time for it.

I really didn't like something they did (read below) and wrote them a letter, which they never even bothered addressing. So I canceled my subscription. Amusingly, I received a "how did we do" survey shortly after....I couldn't really say because they never even tried.

Below is the letter:

I'm a subscriber to your magazine, and was surprised to receive the "100 Greatest Trips" hardcover book in the mail today. I didn't know what the package was, so I opened it and wondered why I had received it - was it a promotion? An interesting offer? What?

Then I opened the attached envelope and saw that I now owed close to $40 (with S&H and tax) for a book I never requested. Sure, there's a "no-risk, return it if you don't like it" notice in the letter. But your sales department hasn't thought it through from the customer's standpoint. I have an extremely busy job and life; I thus do not want to be on the hook for things I haven't even been asked about beforehand. Now I have an extra thing on my massive To Do List: go down to the post office, stand in line, buy new packaging on my dime because your box is torn open now, and pay $8 or $10 for the return shipping! That's about 12 dollars total and more importantly, about 30 minutes of my time.

Not only is this kind of aggressive push marketing presumptuous & ill advised (much as the letter describes it as a nuisance-free experience), but nowhere on the package is a return shipping label provided. Since I didn't ask for this, it's the least you could do. And if I do nothing or take my time, I'm sure you'll be sending increasingly strident bills about what I "owe" now.

I suppose I'll have to swap the time & money I invest in this in exchange with not renewing my subscription. And please never send me any books with strings attached again.

Put yourselves in the customer's shoes - if you received, say, a $100 toaster oven on your front porch from a company that now says you owe them that money for something you never asked for, and have to return at your inconvenience and expense - how would you feel?

Your letter says, "pay only for what you keep!" which sounds great on paper, but what do I do with the book without being inconvenienced or having to pay for a box & shipping?

Might I suggest that you promote your book via e-mail, send fliers asking customers if they would like to purchase it, or even offer it as some kind of incentive under special circumstances. I subscribe to several other publications, and the only other times I've received a 'surprise' book from them was because it was some kind of free incentive. It makes me very angry to think that your sales department thought, "Oh, since they already have it, most will just keep it because it's fait accompli in their hands and we've made the return a hassle, so we've just made a sale!".

The irony is that I might have bought the book later on if the sale had been handled differently. But not like this, and not now.

It's no way to treat your paying customers."

EDIT: Long after I returned that first book and called, asking them to never send me anything I hadn't explicitly ordered again....they sent me another book. And another. And another. Each time, I kept writing, "Return to sender". I couldn't make them stop. Then it seems one of the books didn't arrive back, and they were trying to charge me...insane.