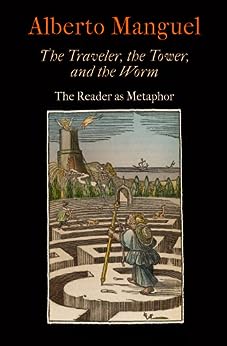 The Traveler, the Tower, and the Worm: The Reader as Metaphor (Material Texts) Kindle Edition

"[Alberto Manguel's] imagination is supple and generous, and his work is full of surprises."—A. S. Byatt, The Washington Post

"The area which Alberto Manguel has mapped for himself is that of the eros of reading. He celebrates the diversities of desire—tempestuous, hidden, intermittent, lapsed—which relate us to a literary text."—George Steiner, The Guardian

Alberto Manguel is the award-winning author of numerous books celebrating the written word, including bestsellers A History of Reading, The Library at Night, and The Dictionary of Imaginary Places. --This text refers to an alternate kindle_edition edition.

4.4 out of 5 stars
4.4 out of 5
5 global ratings
How are ratings calculated?
To calculate the overall star rating and percentage breakdown by star, we don’t use a simple average. Instead, our system considers things like how recent a review is and if the reviewer bought the item on Amazon. It also analyzes reviews to verify trustworthiness.
Top reviews

Charlus
3.0 out of 5 stars Reading Metaphors
Reviewed in the United States on July 31, 2013
Verified Purchase
Alberto Manguel is one of the world's most devoted bibliophiles and for that reason I cannot be totally objective when i read him. His palpable passion for the written word has filled volume after volume over the years, as essayist, novelist, anthologist, historian, academic, editor, translator. Here he has collected a series of lectures exploring the sources and ramifications of three classic metaphors of the reader: the reader as traveler, as resident of an ivory tower and as book worm. There are 15 pages of notes for a text of a mere 120 pages suggesting the density of allusions on the page. And herein lies the weakness of the book: it feels like a bravura piece of research without being particularly enlightening or original. A whole chapter is devoted to Hamlet but this has more to do with the idea of the detached intellectual who can't act but seems to have little to do with readers per se and presumes Hamlet is an intellectual rather than just a man who can't make up his mind. Arguments can be made back and forth on this one, but the chapter still feels like an unnecessary detour.

Similarly his chapters on the reader as traveler becomes a little dense in the metaphors of metaphors department and required a great deal of focus with little payoff. Gems of insight are sprinkled throughout the text of course and his sections on the book worm was witty and convincing, especially as it used Emma Bovary and Don Quioxte as examples of deluded readers. But this has to go down as one of Mr Manguel's slighter efforts, not without merit but not essential either.
Read more
10 people found this helpful
Helpful
Report abuse