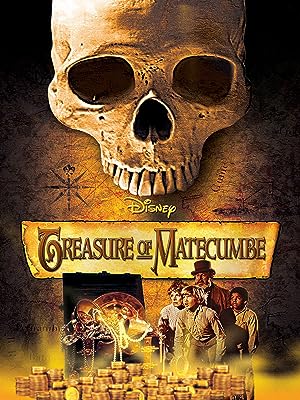 PaulaReviewed in the United States on May 27, 2021
5.0 out of 5 stars
Family friendly and adventurous!
Verified purchase
Wonderful World of Disney, when it stood for decent morals! Sunday nights were great, we all (the whole family) watched tv. We didn’t have to worry about any of the craziness that is happening today! This movie is very family friendly and very exciting! We are so blessed to find all of these kinds of movies and we are so very thankful that y’all carry them!
3 people found this helpful

ogrekingReviewed in the United States on July 14, 2016
5.0 out of 5 stars
heyday of family t.v
Verified purchase
The death of family night t.v by big three networks signalled crap fest of what t.v has evolved too.
Wonderful world of Disney & mutual of omahas wild kingdom were Highlight of Sunday night t.v.
treasure of metecumbe was amongst many fun hems Disney aired back in day.
Puuuuure family fun

microjoeReviewed in the United States on November 1, 2005
5.0 out of 5 stars
Peter Ustinov, Joan Hackett
Verified purchase
STORY: Action, comedy, adventure, romance, nostalgia, this movie had a bit of something for everyone. Immediately after the American Civil War in Kentucky, two young boys one white named David, one black named Thad, begin the adventure of their lives. They live on Grassy, the family plantation, with David's aunts but it is depleted of all its money and they could lose it soon. Someone shows up late at night near death with a secret to a map hidden in the attic by Davids father before he died. But the same night a murderous criminal gang led by Spnagler (Vic Morrow) arrives in the night, breaking into the family plantation in order to steal a map to a treasure. The boys run away with the map, and start traveling to the Florida swampland. They know they can trust no one with their secret. Along the way they meet up with many friends and enemies, while still being pursued by the original crooks. A conniving southern belle Lauriette (Joan Hackett), a jolly medicine show doctor (Peter Ustinov), and a roaming adventurer (Robert Foxworth) alternatley help and slow the boys at times, but eventually they all join up together. It's a treasure hunt and a journey story story rolled into one. A good adventure movie, might be watched split over two nights if you have smaller kids since it is a bit long and slows down in parts. The movie's running time is a bit long at 116 minutes when the average movie is 90 minutes. But don't get me wrong, it's really fun.

BEHIND THE SCENES: The remarkable Peter Ustinov who also starred in "Blackbeards Ghost" stars as Dr. Snodgrass, a quack medicines show doctor. Dick Van Patten and Jane Wyatt also star. Released as a theatrical movie on July 9, 1976 the movie was directed by Vincent McEveety. He directed mostly comedies at Disney like "Gus", "Million Dollar Duck", The Strongest Man in the World" and the hilarious "Superdad". He is also known for his earlier job as a Disney writer, responsible for most of the wacky college films like "Now You See Him, Now You Don't", and "The Barefoot Executive". The title song was written by Shane Tatum and Richard McKinley. The film required extensive location shooting, beginning in Danville Kentucky, including an early 1800's plantation, with over 200 acres. They also shot on the Sacrament River, standing in as the mighty Mississippi. They used the real Everglades in an area not far from Walt Disney World. The hurricane was filmed in Seminole country and was created in a similar method to one Disney used in the movie "The Wild Country". The studio brought in giant wind machines and airplane engines, this time adding water to the wind. In the film, there is a scene where Ustinov appears to fall and be washed away in the hurricane, surely to die. What viewers did not know at the time was that this was more than good acting, the fall was real, and he was hospitalized from the damage to his left ankle. Some final scene beach scenes, post hurricane, were actually filmed at Disney's man-made lagoons inside Walt Disney World. The screenplay was adapted from the book "A Journey to Matecumbe", by Robert Lewis Taylor. It was a project that Walt Disney had green-lighted when he was alive, but it took awhile for the studio to get to filming it. The movie later aired on "The Wonderful World of Disney" television show on October 2, 1977 as a two hour format. They did some extensive editing to make it fit in the time slot for that night, and maybe that was a good thing. The movie comes in a bit long and does drag a little at times, but we still enjoyed it. By the way, this is not the edited copy, but the full length version. And it was released on video in 1986 for the first time. It was released on DVD in 2009.

Michael TaylorReviewed in the United States on June 27, 2009
5.0 out of 5 stars
Disney Adventure Forever!
Verified purchase
I could speak volumes on what I think of Disney films. Like so many others, those days of adventure and classic TV are all but gone. However DVD at least allows us to finally fill that void and this - from Disney Studios later years, is a great fun flick for all the family. Lots of laughs; cheeky characters and excitement in the usual Disney tradition.

This is another of my favorites from the 'Wonderful World of Disney'. Many people have gone on about the lackluster version of the DVD itself i.e. no special features etc, but as long as there is the movie and it has great color and sound - as this edition has - I am happy.

I would agree with many others however - Disney DVD take note - it would be better for you to edit it the way people prefer and to keep that whole Disney experience as part of the program... have that 'Wonderful World Of Disney' intro right at the start of the movie... hey lets keep the Disney old days feel about it all. Lets face it - that is why people buy these movies - to relive those good old days! A MUST HAVE, DISNEY FANS!
9 people found this helpful

Atsi Nahsa'iReviewed in the United States on January 1, 2014
5.0 out of 5 stars
A River Adventure that even Mark Twain would love!
Verified purchase
They're all here: the adventurous orphan, his carefree best friend, the runaway slave, over-caring aunties, a treasure map and a band of rowdies, riverboat gamblers, a runaway bride and mysterious uncle, night riders, Seminole Indians, hurricanes, mosquitoes, and the ever loveable Dr. Snodgrass, followed in hot pursuit by the menacing, Captain Spangler. Get your ticket to ride along on this rollicking, classic Disney adventure!

This film is a childhood favorite, which deserves to be shared with a new generation. Today's producers could learn a lot from revisiting the genre of young, historical adventure narratives that derive themselves from a simpler, yet challenging time based in hope rather than dystopia. This film is a pleasant reminder of the adventure found in your own backyard, rather than in outer space or the survival arena.

The Treasure of Matacumbe is a bold adventure film with some surprisingly striking moments, and is the definite Godflicker of films like: The Goonies, Raiders of the Lost Ark and Explorers. I would even place a bet that Tarantino was inspired by Matacumbes' Ku Klux Klan encounter as he wrote the screenplay for Django Unchained. Released in 1976, The Treasure of Matacumbe is a worthy reminder of cinema adventure from a galaxy right close to home!
8 people found this helpful

DallasCatWomanReviewed in the United States on August 3, 2012
4.0 out of 5 stars
An Excellent Adventure
Verified purchase
A surprising release from Disney. Young Davie sets out to find a treasure left for him by his father. But he is pursued by the same men who killed his father and forced his father to hide the treasure in far away Florida. Accompanied by his friend Thad, he is befriended by three adults, Along the way he encounters numerous adventures and learns several lessons. More intense than a typical Disney film, it is still suitable for children ages 8 and up with adult supervision (only because there are some rather scary moments). Well written, well acted, a true Disney delight.
6 people found this helpful

RedmenaceReviewed in the United States on July 2, 2020
4.0 out of 5 stars
Family friendly but dated
Verified purchase
If you were a kid in the 70s this was Disney's all ages movie of the week fare. It has some nice character actors and bit of action, a flu klux klan meeting set on fire and a musical number. inoffensive but may not hold the focus of older kids or younger adults.

This is a good adventure movie but it should be kept in mind that the
critics have mostly agreed that "Treasure of Matecumbe" is not highly
rated in many aspects of production.

However, I am not a professional movie critic. I watch movies to be
entertained and not to pick out all the technical faults.

That having been said, this movie did not disappoint me. It was
light hearted and enjoyable with a liberal sprinkling of adventure,
action, humour and drama, with attention to detail for the time and
place in which the movie is set.

The story concerns two young boys, Davie and Thad, who are searching
for buried treasure along the Florida coastline during the mid 19th
century.

Along the way, the boys pick up three adult helpers - Lauriette,
Dr Snodgrass and Jim who also become involved in all the excitement.

The boys and their helpers are pursued by the evil Spangler and his
group of men who will do anything to get their hands on the treasure.

Not a movie classic by most standards but I did find it very
entertaining.

The print has been digitally mastered.
See all reviews
Back to top
Get to Know Us
Make Money with Us
Amazon Payment Products
Let Us Help You
EnglishChoose a language for shopping. United StatesChoose a country/region for shopping.
© 1996-2022, Amazon.com, Inc. or its affiliates