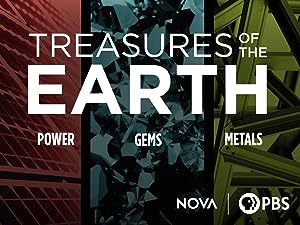 Treasures of the Earth

Season 1
(13)
2016TV-G
Explore how precious gems, metals, and energy resources are forged under extraordinary circumstances deep within the Earth, and discover how their unique properties have helped lift humanity from the Stone Age to the stars.

CHARLES RECKLINGReviewed in the United States on September 19, 2020
5.0 out of 5 stars
A "Very" Good background into the materials of the earth!
What's not to like...I love history and all these elements are part of the plan of the Planet Nbr Three for sure!..Great Goods on why our industries and products are all the same and different in their makeup!..cr/
2 people found this helpful

PaulReviewed in the United States on February 25, 2021
4.0 out of 5 stars
Uncharacteristically heavy pro-nuclear agenda/propaganda
The episode about energy details the various forms of energy we use and the environmental impact of each. During the nuclear energy portion, the narrator says the nuclear power industry has an "image problem." It mentions the Chernobyl and Fukushima accidents but blithely dismisses those ENVIRONMENTAL DISASTERS, instead hyping the industry with several experts singing its praises. It never once mentions the thousands of tons of radioactive waste we are already struggling to dispose of, which will remain fatally radioactive to humans for some 10,000+ years. It's plain irresponsible and a huge oversight.
It's disappointing for a show based on science, discussing the existential impacts our energy use has on our planet, to gloss over such a glaring detail. Maybe the Koch brothers had some say in the script.

Kathleen GloverReviewed in the United States on January 27, 2021
4.0 out of 5 stars
Interesting. Fact filled and engaging
I just finished the first episode---Gems. The program mentions blood diamonds--gems that generate money for warlords and civil wars, but there is no mention of the millions made of "legal" diamonds that enrich European diamond merchants and leave those who mine diamonds in poverty.
One person found this helpful
See all reviews
Back to top
Get to Know Us
Make Money with Us
Amazon Payment Products
Let Us Help You
EnglishChoose a language for shopping. United StatesChoose a country/region for shopping.
© 1996-2022, Amazon.com, Inc. or its affiliates