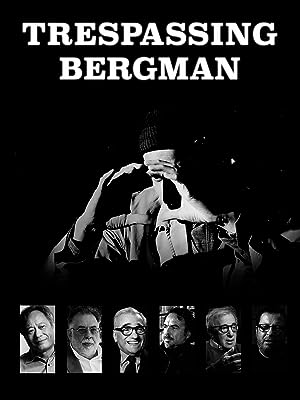 (15)
7.21 h 47 min20157+
A group of filmmakers visit Ingmar Bergman's house on the remote Swedish island of Faro to discuss his legacy, and the art of filmmaking.

Included with Docurama on Amazon for $4.99/month after trial

Watch with Docurama
Start your 7-day free trial
Add to
Watchlist
By ordering or viewing, you agree to our Terms. Sold by Amazon.com Services LLC.
Write review

I Consume ThingsReviewed in the United States on August 12, 2021
4.0 out of 5 stars
Insightful and Illuminating
Verified purchase
I enjoyed it more than I thought I would, primarily because I find Bergman films very esoteric, and while I know they shaped cinema, I wasn't sure why. Hearing contemporary directors and actors explain Bergman's influence and what his work strived to do was illuminating. I especially enjoyed the directors touring Bergman's home on the tiny island of Faro; the intimacy of his library with his rated VHS tapes and the handwritten notes on tables had many awestruck or overcome with emotion which I found moving. Even the somewhat glib John Landis was finally impressed as he stood on the island's beach marveling at the sunset. I highly recommend Trespassing Bergman.
One person found this helpful

Brandon MatujaReviewed in the United States on September 7, 2018
3.0 out of 5 stars
A so-so documentary...
Verified purchase
An "okay" documentary. I felt they could've done a lot better. The fawning and idol-worship of some of the interviewees, I found repellant, and most of it seemed to occur in in the first half of the film or so. Most of the interview-excerpts with the various directors (some well-known in America, some not) were pretty good... It was good to see Woody Allen's, Martin Scorsese's, and Ridley Scott's thoughts on Bergman, as well as other directors' thoughts. I wish they would've spent more time commenting on each movie Bergman made, chronologically, but they only touched on the "biggest" (but not necessarily the best) ones, not mentioning some of the better but less popular of his films... There was also little about Bergman's personal life itself, which I'm sure wasn't a huge loss (because the guy probably did lead a pretty unexciting, solitary life, for the most part), but it would have been informative to see. (There have been many great interviews with Bergman himself over the years, Bergman speaking English quite well and charmingly, which the documentarians could've inserted into this film... But maybe legal issues prevented that.)

The biggest flaw of this film, in my opinion, was the Bergman-worship. Bergman was a *vehicle* for great ideas and talented film-making; he wasn't a divine figure or avatar come to enlighten the masses. Some of the jokes and irreverent comments made at Bergman's expense came across as refreshing instead of annoying like they otherwise would've struck me. (I'm a big fan of balance... I don't like too much criticism, nor too much fawning.)

VuvuzelaReviewed in the United States on December 25, 2018
5.0 out of 5 stars
excellent for any fan of great movies
Verified purchase
This is a very entertaining and informative documentary for a movie fan. It's not a biographical piece on Bergman and it doesn't pretend to be. I suppose people who are movie-philes or otherwise more expert on Bergman than the average movie fan may adopt a critical attitude as it sometimes seems they must. But for me, its great to see all these wonderful current directors talking about a giant among moviemakers, and see the strange and fantastic house he built and lived in for 40 years, and the isolated and stark seaside and pine location of it. The whole approach of this documentary, if that's what it should be called, is fairly unique. Also, the opinions among the directors are not uniformly fawning. You hear information from people who actually knew Bergman. And you hear some criticism and differing opinion. I loved coming across it on Prime video and enjoyed the whole thing.
One person found this helpful

LucyReviewed in the United States on November 30, 2017
5.0 out of 5 stars
So great to see where Bergman spent his life and shot ...
Verified purchase
So great to see where Bergman spent his life and shot some of his best films. The stark Scandinavian landscape and simple interiors. The emotional influence he had on so many varied distinguished directors and actors. Fascinating interviews, unexpected information. One of the directors, the only female interviewed, was so overcome she had to leave the house and sit outside. Maybe she was being a drama queen or maybe she was literally picking up on something. The place is probably haunted. About half the directors on the edge of tears as they speak of Bergman. It is strange that Liv Ullman was not interviewed. No mention of one of his greatest films Cries and Whispers. Otherwise highly recommend.
3 people found this helpful

B.D.Reviewed in the United States on September 9, 2020
4.0 out of 5 stars
GREAT documentary but most annoying subtitles
Verified purchase
The film alone is great, even with the annoying subtitles, still managed to enjoy it.
All subtitles including music explanation like "gentle piano music' does not go away when it ended, it stays and overlaps the next interviewer and blocks their dialogues, had to guess many parts of the interviews.

Gregory NaughtonReviewed in the United States on January 20, 2021
5.0 out of 5 stars
Stunning
Verified purchase
Stunning. Especially as an introduction to Bergman's films to someone who doesn't know his career well.
One person found this helpful

ROReviewed in the United States on February 22, 2019
2.0 out of 5 stars
Woody Allen is in this film
Verified purchase
Unfortunately they interview Woody Allen extensively so I had to stop watching the documentary as one cannot fast forward to avoid it. Such a shame.

BReviewed in the United States on October 13, 2017
5.0 out of 5 stars
Fascinating cinematic journey!
Verified purchase
Fascinating journey with some of the world's top filmmakers into the island home of Ingmar Bergman.
2 people found this helpful
See all reviews
Back to top
Get to Know Us
Make Money with Us
Amazon Payment Products
Let Us Help You
EnglishChoose a language for shopping. United StatesChoose a country/region for shopping.
© 1996-2022, Amazon.com, Inc. or its affiliates