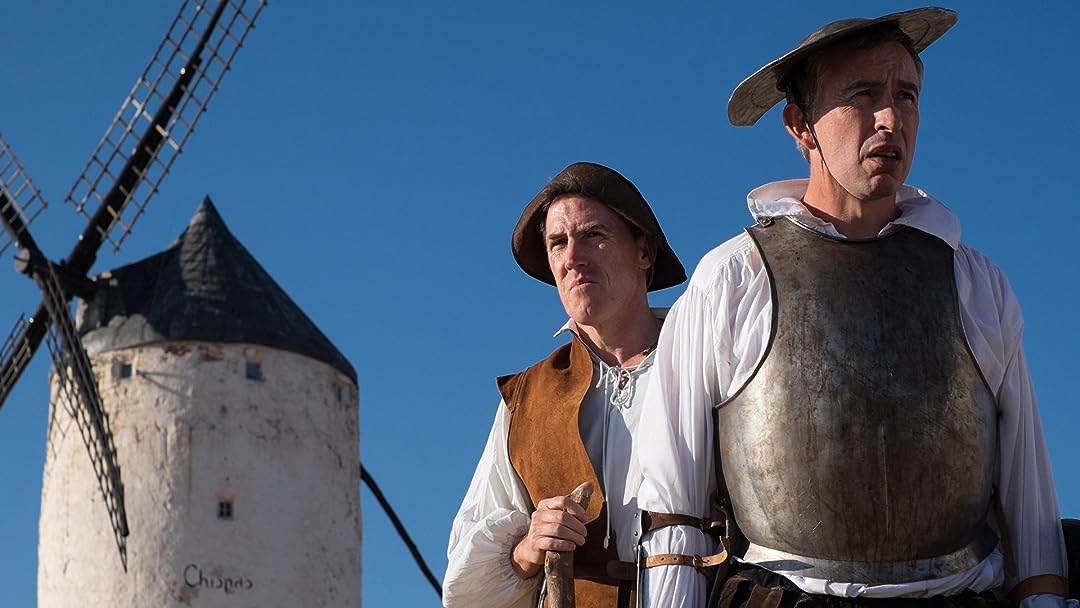 The Trip to Spain

Matto BorkeReviewed in the United States on June 2, 2020
1.0 out of 5 stars
A trip to Cleveland on a Grayhound bus full of screaming babies would be my preference.
Verified purchase
Fascinating that two allegedly talented and engaging persons could be so self-absorbed as to be utterly boring. While their exterior is meant to be the sophisticated maturity of 40 year olds, their inner life is that of 16 year olds. Such drab empty shells, apparently just what the entertainment industry is looking for. Is the film meant to be self-parody? Beyond all that, the viewer will learn nothing about Spain, nothing about the regions they are traveling through. I only lasted 30 minutes. Maybe subsequently they interact with other people so that some life comes into the story. Otherwise you, the viewer, are stuck on a road trip with two of the most boring, irritating travelers you cannot wait to get rid of.
One person found this helpful

TrancelucenceReviewed in the United States on November 30, 2017
3.0 out of 5 stars
Banter becomes more juvenile with each Trip but worth watching
Verified purchase
This review contains SPOILERS. 2 1/2 stars. I'm a big Steve Coogan fan, and like Rob Bryden too, though have only seen him in the three Trip series. I liked the first two quite a bit, though the second one a little less, and now this one, which I liked considerably less. Why? These fellows seem to be regressing, growing less mature with each one. I am past 50, and intelligent people I know are discussing what's happening in the world, their families, aging, most of all the meaning of life. It tends to become even more important as we age. As Bette Davis famously said, "Old age ain't no place for sissies."

In Series 2 I thought it unlikely that these two would be waxing on about bedding young women. It was the WAY they discussed it, in terms of nameless conquests (this was a continuation of Series 1 in which Coogan beds random women- I assumed a form of denial over having been dumped by his girlfriend Mischa). It might have been more palatable to me if they'd also spoken ruefully about first loves, new loves being a thing of the past, perhaps. Anyway, where was the philosophizing about the meaning of life, one's achievements or lack thereof, changing perceptions of self, mortality, the imminence of death, etc.? As The Sunshine Company sang- "Once I used to think that the world belonged to me- now it belongs to someone else." ([[ASIN:B007SV288Q Back On The Street Again]]). Such issues were hinted at, though, suggested by the discussions about Wordsworth and Coleridge, walks through cemeteries, etc. in Series 1, and (despite the banter about picking up young women) in conversations with family and friends, discussions of Byron and Shelley, the visit to Pompei, and more, in Series 2.

Now we have Series 3 in which Coogan exponentially amps up his ridicule of Bryden about everything- losing his hair, being shorter and less attractive than Coogan, and most of all, being less successful than he. People don't do this after years of acquaintance (well, maybe idiots do, but these are bright, well-educated, worldly guys). Too much, too mean-spirited, doesn't ring true (and Coogan himself said in his autobiography that he's not as churlish as his "character" in The Trip. So why spin it that way?).

Personally, I love the impressions in all three series, especially Michael Caine- for me worth watching for those alone, though I must say that although they did bang on impressions of Mick Jagger's physicality and voice, the working class accent was wrong. Jagger grew up in an educated family, his father was "head", the Dean of St. Mary's University in London, and Mick himself went to the London School of Economics, no small potatoes (my husband knew them both in his youth). Mick's nothing if not cultured and erudite, Just sayin'. And I don't think I've ever heard anyone even attempt to do Bowie, so cool (ditto with Stephen Hawking).

But I didn't find this offering nearly as funny as the other two. And neither Spain nor the Spanish (Don Quixote but no Gaudi?!) nor its food were well-showcased. And finally, while I appreciated the ironic import of the ending, I don't like to be kept hanging, meh. Hopefully we'll find out what happened to Mr. Coogan in Trip #4. I do think the series are worth watching, even when they falter some- whether they will be your cup of tea or not I don't know.

errin spellingReviewed in the United States on October 21, 2020
4.0 out of 5 stars
the spanish fly or the spanish flea
Verified purchase
a beautiful trip to spain. i'm not sure which one likes to speak more. they enjoy food and jokes and banter and songs. again, just like in the trip to italy, they speak of the song, a circle within a circle. now this is in every movie. and again with the 20 year older woman, but this time, he does not say she is fat and 80.they have lunch with the same women and visit the alahambra.we were about to take a cruise, on the way to london and stop in spain for 3 months, when the virus struck. now, home forever.

MetalBrainReviewed in the United States on December 27, 2017
5.0 out of 5 stars
The 3rd movie in the series and just as funny as the first two!
Verified purchase
The third installment of this great movie series. I hope they keep making more of these movies as these 2 guys work really well together. This is just as funny if not funnier than the first 2 movies. The only knock is that there is no deleted scenes. Not sure why as the first and second had close to an hour of deleted scenes and they were very funny.
4 people found this helpful

The Baby NeilReviewed in the United States on January 25, 2018
5.0 out of 5 stars
Master Wayne, shall I get the Bat-Mobile?
Verified purchase
'The Trip', 'Trip to Italy' and now 'Trip to Spain'! Same old stuff, same old impressions, same ladies...same old same old! I don't care, Steve Coogan and Rob Brydon are superb and 'Trip to Spain' is just as good as the first two movies! Keep on making more, plenty more countries to visit and restaurants to fall prey to the dulcet tones of Sir Roger Moore (miss you) and Sir Michael Caine...Brydon: 'Ah Mr. Bond you enjoy killing just as much as I do' Coogan: 'Yes but I do it for Queen and country!'
One person found this helpful

Michael LReviewed in the United States on January 21, 2018
3.0 out of 5 stars
If you haven't watched Trip to Italy, do so first. Trip to Spain falls flat in comparison.
Verified purchase
As a big fan of Coogan and Brydon and having thoroughly enjoyed "Trip to Italy", I was disappointed with Trip to Spain. The acting and especially the banter between the two was brilliant, but the plot and cinematography were not as interesting or captivating. Even the restaurant scenes were a little tiresome. I actually watched this film over two days after becoming bored and pausing it. At the very least, the impressions by these two are always good for laughs - but overall the film was no match for Trip to Italy... and I expected better given that Spain has equally impressive history, beauty and culinary delights.
One person found this helpful

mp60Reviewed in the United States on March 16, 2020
1.0 out of 5 stars
They get worse and worse
Verified purchase
This was just more of the same. Totally self-aggrandizing and immature. I was actually embarrassed for them. Talk about flogging a dead horse. Cringeworthy waste of time.
One person found this helpful

Jody in MinneapolisReviewed in the United States on January 18, 2018
3.0 out of 5 stars
So So
Verified purchase
I saw #2 Italy first and I was rolling on the floor within 10 minutes, and I'm a fifty-something woman with very little knowledge of many of the movies the guys referenced. I loved #2. Watched The Trip #1, chuckled a few times, it seems so outdated now. Waited for #3 Spain and was disappointed, my reaction was similar to movie #1. I find Coogan a bit sexy and his impressions are better than Brydon's. What's next? The Trip To Greece? "Hey Rob, it's Steve..."
One person found this helpful
See all reviews
Back to top
Get to Know Us
Make Money with Us
Amazon Payment Products
Let Us Help You
EnglishChoose a language for shopping. United StatesChoose a country/region for shopping.
© 1996-2022, Amazon.com, Inc. or its affiliates