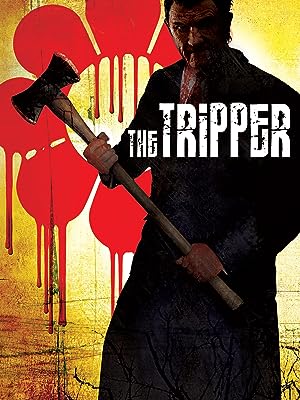 (103)
5.01 h 37 min2006R
Directed by, co-written by and starring David Arquette, this classic horror movie revolves around a group of friends who escape to a modern-day Woodstock concert for a weekend of debauchery, only to be stalked by a homicidal maniac determined to finish what he started years earlier.

bugmanReviewed in the United States on July 5, 2020
5.0 out of 5 stars
Beware the Gipper!
Verified purchase
The Tripper (2006). David Arquette's directorial debut proves to be an absolute delight: funny, smart, weird. A scathing anti-Reagan polemic, The Tripper tells the story of a bunch of hippies at a musical festival that are beset upon by a psychotic killer, one that bears an unmistakable resemblance to to a certain jelly bean-loving former president. But it is so easy to forget these days, as we stare down the monster currently lurking in the white house, that awful monsters proceeded him, and Ronald Reagan was no exception. Reagan was truly awful, viciously so, and it's valuable, I believe, to model a cinematic serial killer after him. Valuable and appropriate. The Tripper is loaded with wonderful performances, led by Jaime King, who is simply a delight, and she anchors the whole thing. She brings baggage with her, of course, thereby providing her with additional--and deeper--motivation. Thomas Jane is on hand to play the sheriff, and he mines it for all the fun it's worth. Jason Mewes is also pretty awesome; he, of course, does tons of drugs, but in a much more low-key way than we're accustomed to. And there is copious drug use, sex, and rock n' roll, as if to really give Reagan and his cronies the big middle finger. David Arquette proves to be a confident and capable director, as The Tripper moves beautifully, establishing the narrative impetus and then hurtling forward. Visually, this movie is stunning, even more so due to its presumed lack of budget. Not only does all the acid being dropped lend to some really, ahem, trippy camera work, but the locations in Northern California are filmed gorgeously. Several times I found myself appreciating how beautiful the woods, swamps, and nature in the movie are, and how perfectly Arquette and DP Bobby Bukowski capture them. Truly, this movie was something of a revelation, smart, funny, gory, and above all else, deliciously entertaining. Features copious male full frontal nudity, always a plus! Arquette should absolutely direct more.

Andrew LynchReviewed in the United States on October 30, 2015
5.0 out of 5 stars
A must see gory,party slasher flick.Dark humor included.
Verified purchase
I remember seeing this movie a few years back on Starz or somewhere on-demand & found myself sucked in right from the beginning scene to the intro credits. This review contains "spoilers" i guess that's what you would call it,but trust me my review will not dull the hype of the movie nor will it ruin it. The film is a slasher flick riddled with dark humor almost in vain of Dead Alive(well Dead Snow 1&2 are more similar in that respect) but there is alot of that humor & throwback lines from the killer and the philosophy behind the killings,it is like going back to the Regan days. Partially becaus the killer grew up during the Regan Anti-Drug war days & wears a Regan mask while slashing his way through a Southern California psychedelic jamfest.
The movie is produced & written by David Arquette as well as him playing a part in the film,also in the film is Jason Mewes(Jay & Silent Bob) and Tomas Jane(Punisher) and Peewee Herman amongst others.
But the film starts out with a child watching Regan on tv while his dad tends to his sick wife who is dying of cancer. So the kid goes with his dad to the logging site where some hippies are protesting the chopping down of trees & proceed to offend the husband who's son is with him & wife is dying of cancer at home.
So the kid grabs a chainsaw and goes nuts,then he is shoved in an insane asylum. Fast forward to modern day America where a group of drug fueled youngins go in the woods of California for a party & concert. Little do they know that a maniac who hates drugs,sex and violence(in vain of the Reganomics) ready to slice,dice and smash them all to pieces. There are traps set in these woods so alot of deaths are considered accidents,until they find disemboweled & beheaded bodies. Thomas Jane plays the head sheriff in this town & he knows about the old man whos son was released from the psyche ward in the woods living off the land,with traps set and vices against outsiders. Amongst all that chaos the main girl in the film thinks she is being stalked by her overly posessive ex-boyfriend who is determined to get her back from the dregs of society that are drug addicted youth.
There is nothing but drugs,sex,violence and madness involved in this film which to me makes it a prime slasher flick. The kills are all pretty gory and violent,most of them are unique as well is the debauchery involved. The storyline is very interesting & i find it very intriguing as well as in it's own way it is pretty unique. The acting is damn good,the violence and story are top notch & the jokes are hilarious,all the dark humor involved is just hilarious.
If you dig sex,drugs & violence all wrapped up in a nice gory slasher story The Tripper is a must see movie for you.
Watch it,love it,buy it !

Matthew SnopenhauerReviewed in the United States on April 14, 2020
4.0 out of 5 stars
Fun, funny, gory anti-hippy dark comedy
Verified purchase
Loved it!
David Arquette does a lot on a small-ish budget, creating funny situations, dark humor, interesting textures and scenes, and lots of gore. Apparently the filmmakers of 'The Truth About Beef Jerky' whined that 'The Tripper' ripped off their film, but the research I did didn't confirm that.
'The Tripper' is about a Ronald Reagan mask-wearing axe murderer who hunts hippies at a music festival in the northern CA woods. What's not to like about that?
Jason Mewes is hilarious.
The music festival and neo-hippy culture is supposed to be about (yawn) peace and love, but there's so much tension and violence and malignant behavior in this film from so many characters, it reminded me of Werner Herzog correcting the grizzly man's peace and love view of the universe in 'Grizzly Man.'

The film gets preachy in the closing credits, which I didn't like, but that's a minor complaint.
Highly enjoyable and recommended.
One person found this helpful

Russell SReviewed in the United States on April 17, 2017
4.0 out of 5 stars
If gore and dark houmor are your thing....you will definitely like this.
Verified purchase
a group of friends who escape to a modern-day Woodstock concert for a weekend of debauchery, only to be stalked by a homicidal maniac determined to finish what he started years earlier. This weekend is supposed to be a free love type of weekend and it is until an ax wielding killer wearing a Ronald Reagan mask begins a series of slaughtering the teens. This movie without a doubt has its tongue planted firmly in cheek and should be taken with a grain of dark humored salt. There is the usual stuff and the not so usual stuff, Thomas jane as the sheriff is a crack up and Paul Reubens (PeeWee Herman) as the ringmaster of this weekend is cool too. Lots of fun performances and really is worth the look. I liked it and was mostly smiling at this ultra gory film.
2 people found this helpful

B-Movie FanReviewed in the United States on April 6, 2008
4.0 out of 5 stars
A homage/parody of the "themed" slasher films of the past
Verified purchase
I was pleasantly surprised by how much fun I had watching this movie. In his directorial debut, David Arquette chose to do a homage/parody of the famous "themed" slasher films of the seventies and eighties. Instead of a hockey mask and campers or a "holiday" theme, our killer wears a Ronald Reagan mask and kills hippies. Our protagonists, sort of, are a group of pill-popping hippies on their way to a kind of "Burning Man" or "Woodstock" in the woods type concert.

On the way to the concert our lovable, soon to be messily killed, hippies have to deal with paintball shooting/bottle throwing rednecks, old hippies left over from the sixties, several irritating flashbacks, and the occasional nudist (and if you watch the extras, you will discover that the scariest thing in this movie is the "left over from the sixties hippie nudist . . .).

Although never in any danger of being confused with John Ford or Michael Curtiz, Arquette does a good job with the material and genre in which he's chosen to work. Don't misunderstand, it is both a b-movie and a parody - so it won't be everyone's cup of tea; but if your tastes run to parodies, b-movies and slasher films . . . or if you've ever thought it would be fun to watch animal rights activists getting mauled or tree huggers finding themselves on the wrong side of a chainsaw, this is the movie for you.
5 people found this helpful

N. DurhamReviewed in the United States on December 17, 2007
4.0 out of 5 stars
Hysterical homage
Verified purchase
What happens when a backwoods living, Ronald Reagan obsessed madman who hates hippies goes on a killing spree? You get The Tripper, a deliriously funny, and gory, slasher revolving around a group of modern day hippies (among them are Jaime King, Lukas Haas, and Jason Mewes) going to a big music festival in the woods, and get hacked to pieces by said maniac who wears a Reagan mask and has a dog named Nancy. What makes The Tripper so entertaining is that it doesn't take itself too seriously, and the gore effects and shocks are actually pretty imaginitive. Where The Tripper falls flat are the occasions of modern-day political commentary that pop up throughout the film, and when this happens in the film it feels kind of out of place. That aside, there's plenty to enjoy with The Tripper, particularly The Punisher's Thomas Jane as the straight laced sheriff (sporting a 70's 'stache) and a foul mouthed Paul "Pee-Wee Herman" Reubens as the music festival's promoter. All in all, The Tripper is a surprising blast from David Arquette, and is more than worth checking out for slasher/horror afficiondos.
11 people found this helpful

Joseph CazzutoReviewed in the United States on July 19, 2020
5.0 out of 5 stars
Awesome horror film!
Verified purchase
I love this film! Plenty of blood and gore! I got it for a low price so expected low quality but it looks great when I play it on my projector!!

Charles LynchReviewed in the United States on July 8, 2019
2.0 out of 5 stars
Wanted to love this movie
Verified purchase
A very mediocre slasher film. The kills, script and characters all pretty much sucked. The only good characters were Thomas Jane's and Paul Reubens. The only good kill was at the end of the film and most of the jokes fell flat.
See all reviews
Back to top
Get to Know Us
Make Money with Us
Amazon Payment Products
Let Us Help You
EnglishChoose a language for shopping. United StatesChoose a country/region for shopping.
© 1996-2021, Amazon.com, Inc. or its affiliates