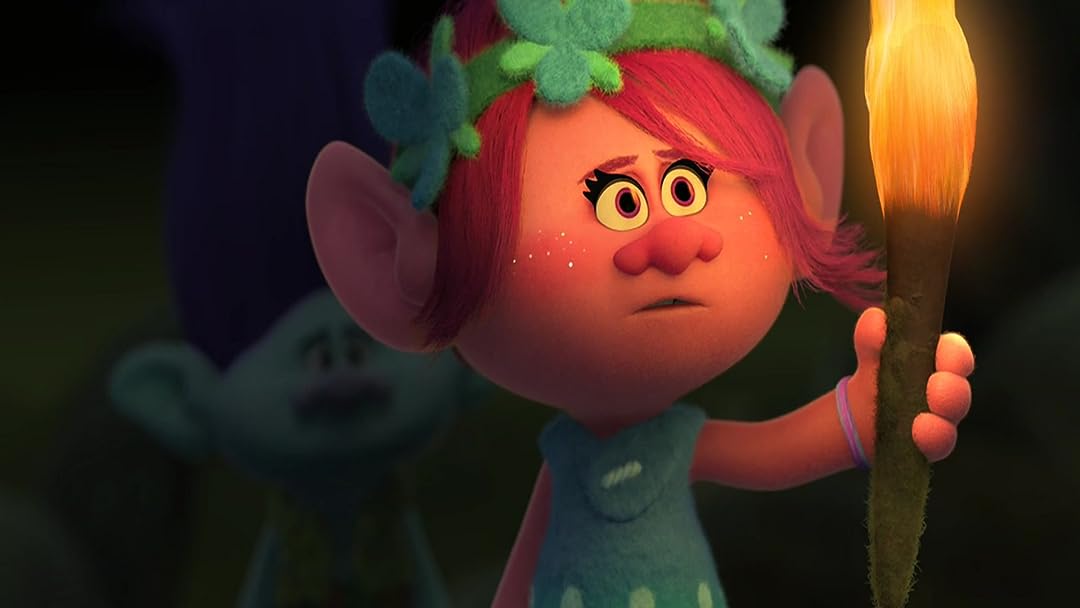 (60,436)
6.41 h 32 min2016X-RayPG
Join Poppy and Branch in a music-filled original adventure to save their pals from the giant Bergens. With original songs by Justin Timberlake.

MeaganReviewed in the United States on February 2, 2018
1.0 out of 5 stars
Misleading information about DVD/Digital copy
Verified purchase
DVD does not include Digital as advertised.

The movie is fine, my kids love it. I decided to buy a digital and DVD copy and amazon had it listed as "Digital Ultraviolet HD + DVD". I received the DVD and called to ask about the digital code. The first associate told me that apparently "Digital Ultraviolet HD" in this case just meant a higher definition DVD. I called again because that just didn't seem right. The next person just said it shouldn't say digital online. The title and chart both said digital, but it is false advertising. Be careful for that!

CalReviewed in the United States on April 4, 2019
1.0 out of 5 stars
No digital insert
Verified purchase
Didn’t come with the digital insert like it was supposed to. That was the whole reason I purchased this.
39 people found this helpful

JessicaReviewed in the United States on June 13, 2019
5.0 out of 5 stars
So Cute! Mom Approved!
Verified purchase
Despite being a “Millennial” this is the first digital movie I have ever purchased! To say that my almost two year old loves this movie is an understatement. When it disappeared off the streaming service we use, I had to make sure he’d be able to watch it no matter what, to save my sanity.

We have seen this movie easily hundreds of times, but it’s so darn cute, I don’t even mind. Yes I have most of the dialogue memorized. Yes I can sing along to all the songs. Yes I have to defend it to other adults that think because it’s so bright and colorful and animated that it must be overly saccharine and cheesy and just not good...but that isn’t the case! The music is catchy. The voice acting is good. The jokes make me laugh and the animation is very well done.

I should be ripping my hair out due to how many times this movie has been on in my house, but instead I sometimes find myself pleading with my toddler to pick this over some of the other shows/movies he’s into (I won’t name names, but the most offending network rhymes with mick munior)

J. T. CallReviewed in the United States on January 9, 2017
5.0 out of 5 stars
Once a skeptic. Now a proselytizing convert.
Verified purchase
When I saw the teasers for this movie, I thought "Great, another Angry Birds movie. Just a bunch of crass fart jokes wrapped around a commercial thing that a certain group of people love, marketed as a kids/family movie, but probably too inappropriate and with too many jokes that will go over their heads. Probably no plot and very little moral-of-the-story. Not gonna feed that to my kid." And yet, I also lamented that, at the time, there were no other movies to show to my 4-year-old. So I watched another trailer and saw that the movie would be filled with song-and-dance numbers. "Hmm," I thought. "My son will love those. I mean...they don't look terrible. Maybe it won't be so bad."

Well, I'm here to tell you it was GREAT. It wasn't just good because I had low expectations (though that probably worked in its favor). I'm saying, as a father and as a professional storyteller, it was great. The plot was good (perhaps a bit predictable, but only in the large details, not necessarily in how the plot moves from A to B to C) and had enough pleasant surprises to keep me and my son entertained throughout. The songs were fantastic (they introduced my kid to some older music that I know and love, plus had some new stuff and a really good mix of genres). The animation was great. The characters were genuinely enjoyable to watch, and their actions had genuine consequences (something I really applaud in any story).

As for the fart jokes, yes there were a few of those (though much less than I thought), and they mostly consisted of one specific troll shooting glitter out of his bum whenever he was excited, scared, celebrating, fighting, etc. And since it was specific to the one troll (one who was covered with glitter and whose name was Guy Diamond)...it seemed perfectly appropriate and just irreverent enough to be funny without being offensive.

[SMALL SPOILER AHEAD]
What was perhaps the most surprising of all, though, was that Trolls had a genuine moral to its story—one that wasn't shoe-horned in there but was instead entirely authentic to the plot and characters we were presented. And the moral is this: "We don't need to rely on an external thing to make us happy. We can simply be happy...by choosing to be happy." I think that is something we can all take to heart no matter our age. It is also something we can never be reminded too often, and I think Trolls illustrates that idea very poignantly, without sermonizing and with more fun and pomp than I could reasonably ask for.

One note of caution: when I took my son to see this movie, he was worried it would be scary, and was very reluctant to see the film because he was under the impression the trolls in this film were like those that a certain hobbit had to fight... Well, these trolls were definitely not scary, BUT the "Bergen" that want to eat the trolls were a lot less kid-friendly. At one point, he asked me to plug his ears so that he wouldn't be scared, then he would close his eyes and peek out occasionally. I was worried we might have to leave the theater, but he stuck through it and LOVED the movie. Absolutely hands-down loved it (and especially the ending). I don't personally think his fear is reflective of the film being scary, but the film's evil cook is definitely a fearsome creature, and I could see the plot (cuddly protagonists trying not to get eaten by scary antagonists) being too much for some young viewers. Even so, I invite parents to give it a try as the theme, the songs, and the fun characters are certainly worth it.

FINAL VERDICT: I originally expected to despise this film and went to see it with great reluctance. When I left the theater, though, I found myself (no-longer-reluctantly) admitting that this was one of the best films I had seen that year (and I saw a fair number of family/kid-friendly movies in 2016). I eagerly encouraged family and friends to see it over the holidays, and I have been looking forward to buying it once it is released (so much so that I am pre-ordering it on Amazon). Even compared against what I have seen so far this year, it was far better than SING (which I saw just last week), as it has more musical numbers, more interesting characters, better moral lessons, and an infinitely better plot. I still enjoyed SING, mind you, but I had far more fun watching Trolls, and I expect anyone who watches it to have a similarly good time.
400 people found this helpful

JodieReviewed in the United States on May 29, 2017
5.0 out of 5 stars
Most of the bad reviews I read
Verified purchase
Most of the bad reviews I read, people were upset because the music is from the 80 and not "original". Well guess what.. TROLLS were an 80's thing! I think the movie was cute. My kids both loved it and I enjoyed it as well. If someone is upset because it's not original or you're looking for new ideas, don't waste your time. If you grew up with trolls and enjoy "old music" you might like this one too.
Yes the story line is predictable, but its a kids movie.. it didn't bother me too much. And lets get real... if they all got eaten no one would be happy.
19 people found this helpful

N.Reviewed in the United States on March 31, 2017
5.0 out of 5 stars
Safely entertains my 3 yr old, so I LOVE IT!
Verified purchase
I'm reviewing this movie mostly based on how much my 3 year old loves it. I think it's cute, and I love the old school songs incorporated into it, but it's not exactly at the top of my personal favorites list. However, what matters most is how much "me" time I can get when my 3 year old is otherwise (safely) entertained. I have to say that this movie gives me a good amount of "me" time, so it's moving it's way on up to the top of my list!
16 people found this helpful

Kindle CustomerReviewed in the United States on March 25, 2017
5.0 out of 5 stars
DreamWorks brings a new story to the table which delights the whole family!!!
Verified purchase
Cute Movie! Great quality! Price wasn't horrible. I certainly can't complain. I think it was a preorder, and it looks pretty fantastic on a enormous 4K. I really didn't care about the whole 4K thing, but I'm finding that it's worth spending a little extra for all the movies you actually purchase rather than rent. Heck, we've already watched it more times than I care to remember so maybe quality matters for all the parents who are subjected to this kind of torture. JK! Seriously though, I remember these dolls from my childhood. I appreciate that even though I've seen the troll dolls before, this movie is still something new. :-)
11 people found this helpful

LolaReviewed in the United States on November 5, 2020
4.0 out of 5 stars
Fun and a lot of catchy songs...a little "scary" for my 2 year old, but he gets over it.
Verified purchase
Really cute movie with great songs. Colorful and fun. Unfortunately, part of the story (this happens right in the beginning so its not a spoiler) is that the "bad" characters EAT the trolls which was a bit traumatic for my 2-year-old and now every time he sees that he gets freaked out and cries. I think we all have movies from our childhood where we look back and go- really? Why? For me it was Who Framed Roger Rabbit? where they killed the toons...why? I had to leave the theater. So prepare yourself for some minor trauma and maybe some tears. After that, though, it's really fun. Trolls 2 is even better- no eating, just music :)
See all reviews
Back to top
Get to Know Us
Make Money with Us
Amazon Payment Products
Let Us Help You
EnglishChoose a language for shopping. United StatesChoose a country/region for shopping.
© 1996-2022, Amazon.com, Inc. or its affiliates