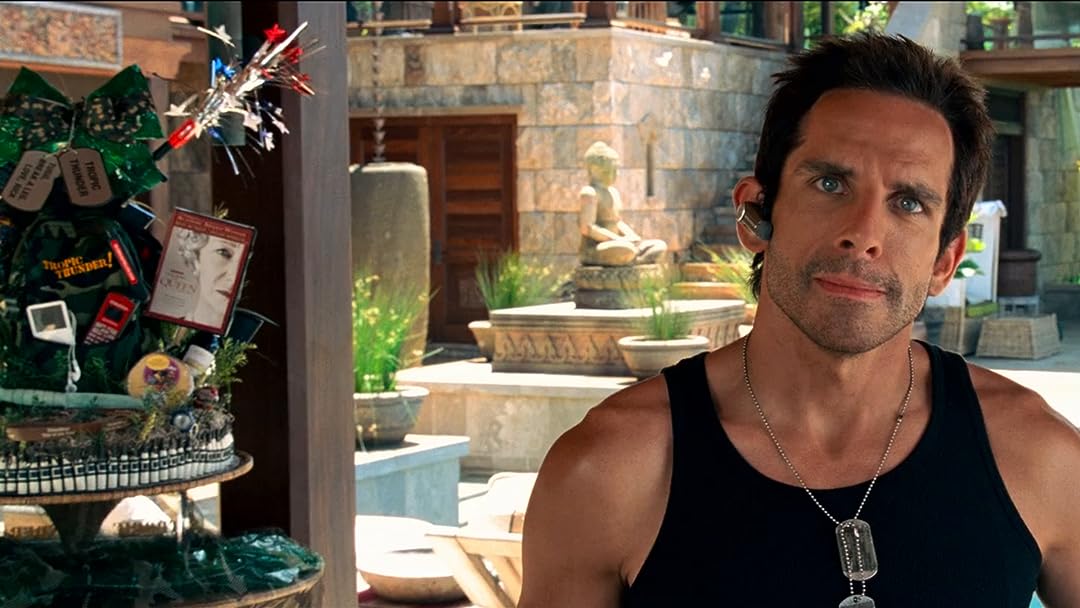 (16,413)
7.01 h 46 min2013X-RayR
Ben Stiller, Jack Black and Robert Downey Jr. lead an ensemble cast in 'Tropic Thunder,'an action comedy about a group of self-absorbed actors who set out to make the most expensive war film.

Just another AmericanReviewed in the United States on February 20, 2019
1.0 out of 5 stars
Amazon fails here. Buyer beware.
Verified purchase
I love this movie, all involved in the movie are brilliant. This movie is entertaining on many levels and can be watched many times.
I gave AMAZON one star because when I bought this movie, the unrated directors cut, it does not have the cast commentary which is even funnier than the movie, which is hard to believe until you see it. It turn out I could have got the dvd for less than half the price and it would have the extra features. Not the Amazon digital copy tho. BOOOOO!
155 people found this helpful

Goth Gone GreyReviewed in the United States on April 13, 2021
1.0 out of 5 stars
RDJ in blackface is not even the biggest problem here.
Verified purchase
With the current "cancel culture" craze sweeping the nation, this seemed like a good choice before it was pulled for the crime of RDJ acting in blackface.

Let me digress - I have a deep and abiding affection for parody movies. Mel Brooks, Hot Shots, Airplane - the goofier the better. Jack Black is great fun, and RDJ? I swoon.

This movie started with an ad and really bad movie trailers, related to the "actors" within the movie at hand. It went into a graphic, deliberately overacted scene the actors acting as actors (following this?) were filming from a Vietnam war movie that was cringeworthy. On purpose? Possible, but it didn't elicit any laughter in my world. The goriness and lack of humor kept increasing until about 30 minutes in, when I gave up entirely. Not a laugh to be heard, just perplexed WTF.

While the many glowing reviews show that there's an audience for this movie, I'm clearly not it.

They get dropped off in the middle of the jungle and it’s very funny. For instance, Lazarus won’t go out of character and insults Alpa Chino for playing a black man. At one point they get into an argument and Kirk grabs Alpa and embraces him and recites the lyrics to the Good Times TV show theme song. The point overall was to make fun of the film business and they accomplished that. There are eccentric actors. Crazy movie executives and more.
C
19 people found this helpful

Kindle CustomerReviewed in the United States on February 21, 2018
5.0 out of 5 stars
COMEDY. Very funny exaggeration of making a spoof of a serious war story.
Verified purchase
OMG... this is so good. As a baby boomer I seldom watch any media about Vietnam. It is just too painful, but this hits just the right spoof quality. It is a COMEDY. A comedy that many won't like. That's okay. Those of us who like smart comedy will love this. I had to look up the palyers to see how RDJ plays this. You won't recognize him... and his voice. Wow. Even Tom cruise is a cameo that has to be seen.

The special effects are over the top. as they should be.

Saying anything specific would be a spoiler. Watch it. I rented it first than had to buy it. So good.
40 people found this helpful

Stella CarrierReviewed in the United States on July 13, 2020
5.0 out of 5 stars
Comedy Relief of A Film
Verified purchase
It was an easy choice for me to purchase the digital version of Tropic Thunder for a variety of reasons. One of the reasons relates to because my husband and I previously had the chance to see the film Tropic Thunder back in 2008 when we were living in Norfolk Virginia (we had Seen Tropic Thunder together at a theater inside the Macarthur center mall in Norfolk Virginia). My husband had convinced me to check out Tropic Thunder with him when it was released in theaters and I am obviously glad that I did and finally multiple years later I now am able to watch this film however many times I prefer to. There are multiple comedic moments in Tropic Thunder such as the parody movie trailers . Additionally, Jack Black, Ben Stiller, Robert Downey jr. Brandon T Jackson, Jay Baruchel are some of the several actors/actresses featured in Tropic Thunder. Tom Cruise is also one of the celebrities who makes some humorous appearances in the movie as Les Grossman, an abrasive character who also happens to greatly love music (such as the chucklesome moments where he is shown doing his dances for the songs Low by Flo Rida and Get Back by Ludacrais). There is also music temporarily played by the Rollingstones, Buffalo Springfield, Enigma etc. Some of the other actors/actresses who make appearances in Tropic Thunder whether in multiple scenes andor momentarily: Bill Hader, Danny McBride, Steve Coogan, Matthew McConaughey, Nick Nolte, Tobey Maguire, Martin Lawrence, Christine Taylor, Jon Voight, Jennifer Love Hewitt, Lance Bass etc.).
8 people found this helpful

The All-Seeing IReviewed in the United States on April 24, 2021
5.0 out of 5 stars
Triumphant Hollywood Satire
Verified purchase
In 2008’s “Tropic Thunder,” a cast and crew head into the jungles of Southeast Asia to film a Vietnam War movie, and in the process exhibit just how disconnected from common realities egomaniacal actors can become.

This is a self-deprecating comedy of the highest order, with A-list talent Ben Stiller, Robert Downey Jr., and Jack Black skewering the pomposity of Hollywood actors -- and therefore themselves -- in what’s become an arguable classic within the satire and parody space. It’s also not for everyone, as it leans of a brand of humor sidesplitting to some and off-putting to others.

Following in the tradition of sharped-edged comedies like [[ASIN:B0014C3KN2 "Blazing Saddles"]] -- while exacting an influence on successors like raunchy record label spoof [[ASIN:B07JVSYPZ7 "Stadium Anthems"]] -- “Tropic Thunder” is as smartly hilarious as it is enduring. - (Was this of use? If so, let me know by clicking "Helpful." Cheers!)
5 people found this helpful

Linda LeeReviewed in the United States on March 4, 2021
1.0 out of 5 stars
Begins bad. Gets worse.
Verified purchase
I didn't like anything about the movie. It is full of graphic blood and gore. It's full of vile conversation and low life standards. Ii's bombarded with stupid CGI scenes during which the actots over act.

This is supossed to be funny. Where???
10 people found this helpful

HBRReviewed in the United States on February 27, 2016
5.0 out of 5 stars
War Movie Spoof Supreme
Verified purchase
Hugely funny for fans of war movie spoofs and of Ben Stiller's sense of humor. I don't typically like gory movies, but this one made me laugh because they did such a good job of exaggerating everything to the point of silliness. I love Robert Downey, Jr.'s role as an Australia superstar method actor who becomes so wrapped up in his role that he really believes he's a black man, irritating the others and especially ticking off the only real black man in the cast. Ben Stiller plays an air-headed egotistical star whose one claim to fame is wearing thin on audiences after too many predictable sequels of his action adventure series, and Jack Black is a hooked on drugs movie star of a series of movies that parody Eddy Murphy's Nutty Professor roles. Tom Cruise's scenes as the foul-mouthed entertainment execute Les Grossman are priceless, and Matthew McConaughey is great as the shallow talent agent.
29 people found this helpful
See all reviews
Back to top
Get to Know Us
Make Money with Us
Amazon Payment Products
Let Us Help You
EnglishChoose a language for shopping. United StatesChoose a country/region for shopping.
© 1996-2022, Amazon.com, Inc. or its affiliates