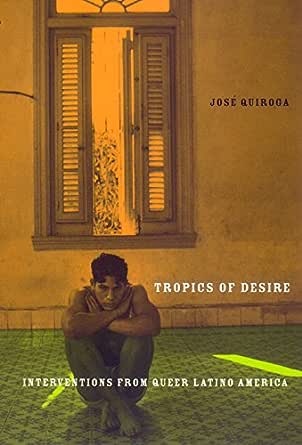 Flip to back Flip to front
Audible Sample Playing... Paused   You are listening to a sample of the Audible narration for this Kindle book.
Learn more
ISBN-13: 978-0814769539
ISBN-10: 0814769535
Why is ISBN important?
ISBN
This bar-code number lets you verify that you're getting exactly the right version or edition of a book. The 13-digit and 10-digit formats both work.

From its sweaty beats to the pulsating music on the streets, Latin/o America is perceived in the United States as the land of heat, the toy store for Western sex. It is the territory of magical fantasy and of revolutionary threat, where topography is the travel guide of desire, directing imperial voyeurs to the exhibition of the flesh.
Jose Quiroga flips the stereotype upside down: he shows how Latin/o American lesbians and gay men have consistently eschewed notions of sexual identity for a politics of intervention. In Tropics of Desire, Quiroga reads hesitant Mexican poets as sex-positive voices, he questions how outing and identity politics can fall prey to the manipulations of the state, and explores how invisibility has been used as a tactical tool in opposition to the universal imperative to come out.
Drawing on diverse cultural examples such as the performance of bolero and salsa, film, literature, and correspondence, and influenced by masters like Roland Barthes, Walter Benjamin and a rich tradition of Latin American stylists, Quiroga argues for a politics that denies biological determinism and cannibalizes cultural stereotypes for the sake of political action.

"Incisive and witty, Quiroga's survey of the constructions of homosexuality in Latin America and the Latino U.S. includes brilliant readings of major literary figuresVillaurrutia, Pinera, Cabreraas well as pop culture icons, from La Lupe to Ricky Martin." -- Daniel Balderston,Chair of Spanish and Portuguese, University of Iowa

"A brilliant and provocative book, admirably observant of historical detail and subtly attentive to cultural nuance. Quiroga shies away from easy generalizations and painstakingly, lovingly, reflects on a variety of Latin American and Latino queer manifestations, from literature to performance. This luminous critical exercise is matched by the author's no less dazzling prose. This book not only furthers queer studies in Latin America, it is, in itself, a beautiful performance that should not be missed." -- Sylvia Molloy,Albert Schweitzer Professor of Humanities, New York University

"I've been waiting for this book, savoring its previews. Reading Quiroga's agile and powerful prose is itself one of the adventures offered here. His balancing act between deadly serious issues of identity and control and the fun and pride of maneuvering accentuates these spectacular accounts of lesbian and gay creativity in the dense social contexts of Latino lives." -- Doris Sommer,Professor of Latin American Literature, Harvard University

"A vivid analysis of how many Latin Americans have crafted alternative modes of understanding sexuality." ― Hispanic American Historical Review
--This text refers to the paperback edition.

Jose Quiroga is Professor of Spanish at The George Washington University and author of Understanding Octavio Paz. --This text refers to the paperback edition.

Charles St-Georges
5.0 out of 5 stars Fast shipping; seamless transaction
Reviewed in the United States on December 11, 2009
Verified Purchase
This was a very smooth transaction with fast shipping; I received the book in no time at all and in excellent condition.
Read more
One person found this helpful
Helpful
Report abuse
See all reviews
Back to top
Get to Know Us
Make Money with Us
Amazon Payment Products
Let Us Help You
EnglishChoose a language for shopping. United StatesChoose a country/region for shopping.
© 1996-2021, Amazon.com, Inc. or its affiliates