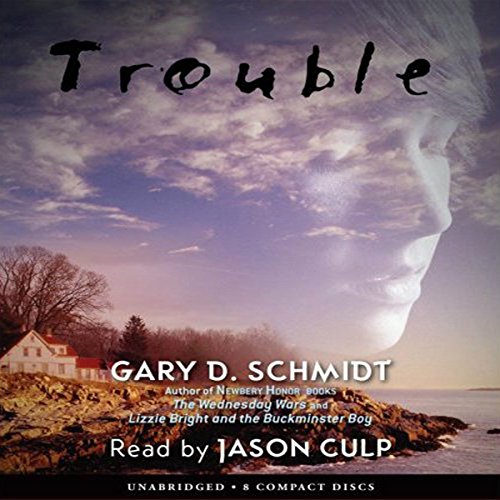 Gary D. Schmidt (Author), Jason Culp (Narrator), Scholastic Audio (Publisher) & 0 more
4.6 out of 5 stars 157 ratings
See all formats and editions
Sorry, there was a problem loading this page. Try again.
Henry Smith's father told him that if you build your house far enough away from Trouble, then Trouble will never find you.

But Trouble comes careening down the road one night in the form of a pick-up truck that strikes Henry's older brother, Franklin.

In the truck is Chay Chouan, a young Cambodian from Franklin's preparatory school. The tragedy sparks racial tensions in the school - and in the town where Henry's family has lived for generations.

Caught between anger and grief, Henry does the only thing he feels he can: he sets off for Mt. Katahdin, which he and Franklin had planned to climb together. One July morning, he leaves for Maine with his best friend and the loveable stray, Black Dog, in tow. But when they encounter Chay Chouan on the road, fleeing demons of his own, Henry learns that turning a blind eye to Trouble only brings Trouble closer.

With moments of humor, tenderness, and remarkable strength, Henry and Chay travel a path to the mountain that neither of them expects.

Your audiobook is waiting!
Learn more about membership
List Price: $22.02
You Save: $2.07 (9%)
By completing your purchase, you agree to Audible’s Conditions Of Use
Sold and delivered by Audible, an Amazon company
Share

N. S.
5.0 out of 5 stars Richie's Picks: TROUBLE
Reviewed in the United States 🇺🇸 on June 4, 2008
Verified Purchase
" 'It smells like you have a dog in here,' he said. 'A wet dog.' His voice was tight.
"It did not seem useful to Henry to lie about this.
"Especially since the dog came around the corner of the island and sat down, her head cocked off to the side so that the ear with the large missing piece stuck out.
"Now Henry's father's face grew tight, too.
" 'Get the dog out of here.' he said.
" 'I just saved her from drowning in the cove.'
" 'That was a mistake. You don't go looking for Trouble, Henry...Get away.'
"The last part was directed not at Henry but at the dog, who had come to sniff Henry's father to see if he might be at all interesting.
" 'Get away,' he said again. 'Black dog, get away.'
"The dog lifted up a paw.
"And Henry's father kicked her about as hard as a slippered foot can kick. Enough to skid her across the quarried stone floor.
"She did not cry out. When she stopped skidding, she turned on her back, put her feet up in the air, and showed her belly.
" 'Why did you ever bring that dog in here?' said Henry's father. 'Look at her. Who would want a black dog like that? Lying there, all beat up. Bleeding. Pieces of her missing.' He stopped. He leaned against the kitchen island and put his hands across his eyes. 'Pieces of her missing,' he said again. His body trembled, slowly, and then a little bit more, and a little more, like a building that is beginning to feel the earthquake starting under its foundations.
"Then his mouth opened, and though no sound came out, his silent howls filled the kitchen.
"Henry held his father. Tight. Very tight. He felt the black dog come back to them. He felt his father reach down to scratch behind her chipped ear. He saw the dog roll her face with pleasure against his father's untied robe -- and hoped that his father would not see the pus and blood that she left there.
"They stood, the three of them, together in the kitchen, and two things happened.
"First, Black Dog had a home and a name.
"Second, the telephone rang. It was the hospital."

Set in the 1980s, TROUBLE is the story of Henry Smith, a middle school student growing up on the northern coast of Massachusetts in a large house which has been inhabited by his ancestors for 300 years. Henry's older brother, Franklin, and his sister, Louisa, both attend Henry Wadsworth Longfellow Preparatory High School in Blythbury-by-the-Sea, the town that has grown up around their ancestral home. Big brother Franklin is the golden boy, popular and athletic, who can do no wrong -- or at least that is how it seems at first glance.

As he did with THE WEDNESDAY WARS, my favorite children's book of 2007, Gary Schmidt creates an extraordinary work of historical fiction that melds zany humor with unfathomable, brutal history with the intricacies of growing up in a family. As with THE WEDNESDAY WARS, he incorporates classical literature. (In THE WEDNESDAY WARS Holling Hoodhood was dealing with Shakespeare; here Henry is wrestling with Chaucer.) Furthermore, in both books there are adult characters who epitomize prejudice and stupidity in the world. The character in THE WEDNESDAY WARS whom I most hated was Micky Mantle. Here, in TROUBLE, it is Dr. Sheringham, principal of Henry Wadsworth Longfellow Prep.

Trouble comes when Franklin is out running one evening and he is struck by a vehicle, causing his loss of an arm and critical brain damage, and requiring that he be maintained in a comatose state. The driver of the vehicle is arrested. We know little about that driver until a pretrial hearing lays out an apparent mystery to be unraveled.

The driver of the vehicle is Chay Chouan. Chay and his parents are survivors of the Cambodian massacres that took place under the Khmer Rouge; Chay has experienced his sister being shot in front of him and his brother being taken by force. Having barely survived, and having made their way out of Cambodia to the United States, Chay's family has settled into Merton, a formerly-abandoned mill town that has been revitalized by an influx of Cambodian refugees. Chay's parents, who have founded a family masonry and stonework business, want the best for Chay. And so it is -- we learn during the pretrial hearing -- that Chay's parents had gotten him enrolled at Henry Wadsworth Longfellow Preparatory High School in Blythbury-by-the-Sea, where Chay has been repeatedly beat up and had his property destroyed by a group of students led by golden boy Franklin Smith.

And -- if we hadn't previously gotten the drift -- it becomes abundantly clear that Chay and Louisa (Henry and Franklin's sister) have been spending time together and are in love. One might well conclude that knowledge of this relationship has contributed to Franklin's neanderthal behavior.

It is during the pretrial hearing, when all of this is revealed, that Dr. Sheringham's testimony also makes it crystal clear that the administration has fully sanctioned the abuse meted out upon Chay by Franklin and his cronies.

And so readers are provided this information, along with the fact that Chay claims to have fallen asleep behind the wheel, and that he bandaged Franklin's arm with his shirt before racing off to get medical assistance. (Remember, this is the 1980s. There are no cell phones for calling 911.)

The question is, with knowing the way that Franklin and his henchmen have savagely beaten and abused Chay, might Chay have purposely or unconsciously struck Franklin?

And how might you feel if you'd had a life like Chay's and found yourself behind the wheel in such circumstances?

"In the dark, in the light, always imagining her face, remembering her face in the moments before the accident. Her laugh. Her easy wave. How her wave had been the first thing about her that told him all he needed to know.
"How had his father guessed? 'Remember you were Cambodian before you were American.' And so he had taken his dog to teach him what he had to learn. He beat her. He made him watch. He starved her. He made him watch. 'Learn how to be strong,' he said. Then he took her away. 'She is drowned,' he said when he returned. 'Learn to be cold inside.'
"But this is not what he learned.
"He had not realized how much he had missed her face."

someproseandcon
4.0 out of 5 stars A great read for teens and adults
Reviewed in the United States 🇺🇸 on April 1, 2013
Verified Purchase
While this isn't my favorite of Gary Schmidt's novels (that would be "Okay for Now" or "Lizzie Bright and the Buckminster Boy"), this is a quietly moving read. Henry's father has told him, "You build your house far enough away from Trouble, then Trouble will never find you," but Trouble does find the family when Henry's older brother, while jogging, is struck by a pickup driven by a young Cambodian refugee, Chay Chouan, a student at the local high school.

Henry is a well-written character, but because this story is written in third-person, there isn't the strong and immediate "voice" of Doug Swiateck or Holling Hoodhood (both first-person narrators in other Schmidt novels). However, the supporting characters in the novel are brilliant, including Henry's friend Sanborne, his sister, his parents, his dog, and Chay, the Cambodian refugee.

Although the novel is powered by both a mystery and an adventure, the magic of the story is in the deft way Schmidt explores the deep challenges of being human and growing up. "Trouble" asks us to recognize that we often learn to live untruths as a way of coping with pain. Responding to the tragedies that have gutted his family, Henry answers the incessant questions of well-meaning people who wonder how he is doing: "And his family was doing fine. Just fine. They were all fine. They were all so fine they could be America's Fine Family. Fine." And as Henry's carefree boyhood dissolves before his eyes, he grows up into the realization that suffering isn't unique to him or his family: "A heart that has lost knows every other heart that has lost. Late and soon, loss is all the same."

As Schmidt writes, "The world is Trouble...and Grace. That is all." And books like this one are powerful and compelling guides to that world.
Read more
5 people found this helpful
Helpful
Report abuse
See all reviews

Claudia Osmond
5.0 out of 5 stars Must Read
Reviewed in Canada 🇨🇦 on March 31, 2019
Verified Purchase
A raw, authentic story of loss and friendship, tragedy and hope.
Read more
Report abuse
See all reviews