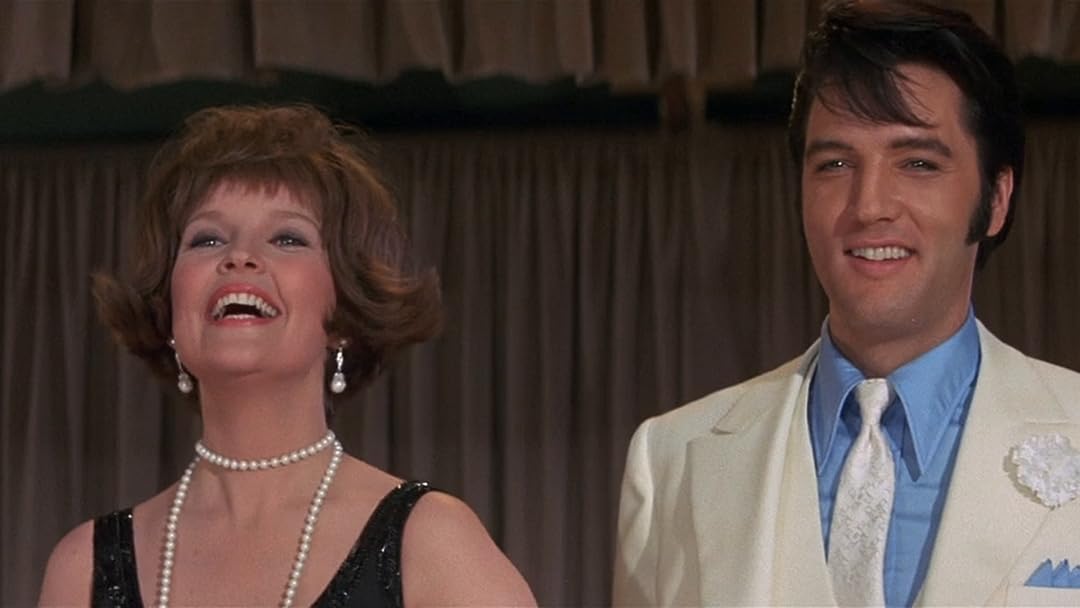 The Trouble With Girls

(352)
5.41 h 39 min1969G
Elvis Presley is the manager of a traveling medicine show who gets involved in a small-town murder case. Musical mystery co-starring Vincent Price, John Carradine, and Dabney Coleman.

Earline TaylorReviewed in the United States on May 20, 2018
1.0 out of 5 stars
THIS REPLACEMENT WASN'T A REPLACEMENT!
Verified purchase
Over the past several years I've replaced some of the CD'S and DVD'S that were stolen from a storage I had. This selection was one of my DVD'S that was stolen. Over the years I've had other Elvis Titles more than once, but only because they were in Collections that were at the time less expensive to buy instead of hunting for them individually. Plus they were more expensive individually too. For the price of this DVD I thought that I was getting a great bargain. Well a bargain isn't a bargain if the product doesn't do what it's suppose to do. I tried not once, but three times to watch this film. And all three times it would not go beyond track 15. I noticed that some other customers had a problem with their DVD too. I decided not to purchase another one because I'm not interested in buying two or three more that may not work either. This is a good movie. And I want in in my Collection. I just have to get it in a different way. Like maybe in a collection. Or find it through a local retailer. This is such a bummer and an inconvenience. I can only give this one star because of the missing half of the movie. This movie has 30 Tracks.
One person found this helpful

R. D.Reviewed in the United States on September 15, 2015
4.0 out of 5 stars
I gotta admit, right here...
Verified purchase
..I bought this because I've been a devout fan of Anissa Jones (who played Buffy on "Family Affair") since I was in diapers. Aside from the sitcom and a cameo on another Don Fedderson production called "To Rome with Love", this role as Carol Bix is the only other credit to Anissa Jones' acting career. And, outside of her typecast 'Buffy' persona, she really does shine, and after you see this, it's no wonder she did try her hand at other acting roles following Family Affair's demise (and was coldly, flatly turned down by producers and directors) amid the early days of the 'Rural Purge'. She's candid, funny, matter-of-factly, earthly...and always adorable with her natural charm. Her talent is often showcased, along with that of her 'replacement', Susan Olsen (uncredited here, she becomes Cindy Brady, of course) and another young star, Pepe Brown, who promptly vanished into obscurity two years later. Fans of Family Affair will enjoy having this in their collection.

Jeff SmithReviewed in the United States on December 10, 2001
4.0 out of 5 stars
A pleasant change of pace for Elvis
Verified purchase
The Trouble With Girls was a pleasant change of pace for Elvis, who had long grown weary of the typical formula flicks, regardless of how well they did at the box office.
The light comedy had a good story to it, and the 1927 setting was great. Elvis is the manager of the traveling Chautauqua, and he blends in well with the rest of the performers, highlighted by Vincent Price, Dabney Coleman and John Carradine.
It was nice to see the movie not centered totally around Elvis' singing, although his rendition of "Swing Down Sweet Chariot" was really motivating. "Clean up Your Own Back Yard" was a great song as well, especially when compared to some stinkers he had done in recent movies.
I read where they were originally going to call the movie "The Chautauqua." They should have done so. I agree with another reviewer who said "The Trouble With Girls," is a deceiving title, making people think it's an "Elvis" movie. This has indeed made it one of his more forgotten and underappreciated efforts. Elvis was in the best physical shape of his life, having come off of the filming of his comeback special, he obviously enjoyed making a different type of movie, and he put more effort into it knowing that his comeback to the stage was just over the horizon once he finished filming "Change of Habit."
And we even see Elvis smoking a cigar. To my knowledge, that is the only time Elvis was seen smoking on screen. Definitely a change from his squeaky clean image from the "Blue Hawaii" days.
See this movie. It won't win any awards, but it lets Elvis fans see him in a different light as his movie career came to an end.

P LedbetterReviewed in the United States on March 17, 2020
5.0 out of 5 stars
Love It!
Verified purchase
If you are an Elvis fan, you will like this one. It is fun, and clean fun. To me, Elvis never goes out of style or out of fashion. Love his music over and over. So many styles, he is truly one of a kind. Fall in love with Elvin all over again in this movie.

LindaReviewed in the United States on October 28, 2017
1.0 out of 5 stars
Do NOT buy!
Verified purchase
I'm giving a review on the disc quality the actual movie!!
The sound was horrible had on loudest, still weak audio and a constant buzzing. The pic quality was like a burnt disc and after 1 hour it shut itself down so I couldn't see anymore and the disc looked liked it had fried when I took it out
Now, I have a brand new DVD Player region free and all my other dvds works just fine on it. So it's the disc.have bought a new copy now from another seller cos I DID LIKE the movie a lot from what I saw.

Todd DeMartinisReviewed in the United States on August 25, 2008
5.0 out of 5 stars
Top-Notch All the Way
Verified purchase
It had been years since seeing "The Trouble with Girls,' but I remembered it was the only Elvis Presley film my father actually liked (he grinned from ear to ear, belly laughing through it). By the opening credits, you already know everyone meant business in making this film; from the costuming to production values to writing to acting to budget). This is no "Stay Away, Joe!"

Interestingly, Elvis is completely relaxed in a way he rarely seems to be in the bulk of his films from the mid-to-late sixties. He's a little rougher around the edges (a newfound love of cigars), but it all works. He's both invested and confident (perhaps knowing he was soon to depart to a new phase of his career after his '68 Comeback Special). Upon watching this particular film, one might agree Elvis certainly could have handled the acting gravitas needed to pull off "A Star is Born" in 1975, perhaps very realistically garnering his first Oscar nomination. Sadly, it wasn't to be.

But, "The Trouble with Girls", along with "Wild in the Country" (1961), and "King Creole" (1958), feature an Elvis where, upon watching, it's hard to remember how anyone could have viewed him as a poor actor. Of course, all three of these films share common variables: serious actors, talented direction, a tight script, and invested professionals from art design cinematography to costumes.

If none of that is enough, it's worth mentioning Elvis is better looking than a thousand movie stars in this film. He is at his physical and charismatic peak in 1969.

V. AbreuReviewed in the United States on March 14, 2015
2.0 out of 5 stars
The trouble with this movie is...
Verified purchase
I realize Elvis was obligated in his contract to make the movies that he made even if he thought they were a total joke and laughed at the story lines so I can't really blame him for how bad it was, but this one I think takes the cake as far as being the worst Elvis movie ever made. Yup it's even worse than 'Change of Habit' which was so bad that it was actually quite watchable and sort of enjoyable.

I thought the story line was very boring and dragged on, also there isn't enough Elvis in the movie. If you're a die hard Elvis fan then for sure this is worth a spot in your collection, however if you want to see Elvis at his best in a semi better movie look elsewhere.
One person found this helpful

Scott T. RiversReviewed in the United States on October 18, 2004
4.0 out of 5 stars
A Presley Film Worthy of Rediscovery
Verified purchase
Released in September 1969 after the culmination of his artistic resurrection, "The Trouble With Girls" is a hidden gem in the Elvis filmography. This charming, offbeat comedy-drama about a traveling medicine show remains among Presley's finest efforts. The 1920s setting is beautifully evoked, complemented by an excellent supporting cast (including Sheree North, Edward Andrews, Vincent Price, John Carradine). For once, Elvis is part of an acting ensemble and delivers a refreshingly mature performance. He also sings a standout rendition of "Swing Down Sweet Chariot" — one of the few gospel numbers Elvis performed on film. Because of its misleading title, "The Trouble With Girls" continues to be sadly overlooked.
12 people found this helpful
See all reviews
Back to top
Get to Know Us
Make Money with Us
Amazon Payment Products
Let Us Help You
EnglishChoose a language for shopping. United StatesChoose a country/region for shopping.
© 1996-2022, Amazon.com, Inc. or its affiliates