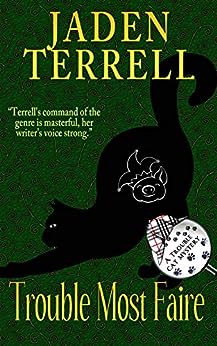 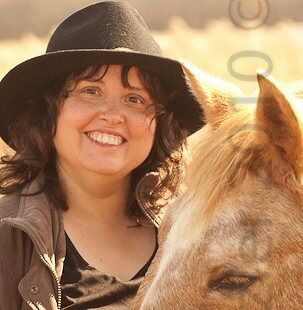 After the worst breakup in human history, Robbi Bryan needs a carefree summer and a place to fly her falcon. To give her wounded heart time to recover, she joins the Sherwood Renaissance Faire. But the faire holds much more than jugglers, archers, and a chance to reenact the days of yore. Robbi finds herself entangled in a web of secrets, lies, rivalries, and murder. The last thing she has time for is a handsome Scotsman with some hefty baggage of his own.

Mal McClaren has found a haven and a retreat among the permanent residents of Sherwood, Tennessee’s year-round Ren Faire. When a murder threatens his home, the brawny Scotsman comes up with a risky plan to find the killer and save the faire. He didn’t count on falling for a feisty falconer with a troubled past.

Trouble, the famous black cat detective, has never lost a human in his charge. He’s also never had—or wanted—a sidekick. But with a killer on the loose and the future of the faire in jeopardy, Trouble must work paw-in-hoof with Tuck, an incorrigible potbellied pig, to unmask the killer and show two wounded people that love is a risk worth taking.

Jaden Terrell is a Shamus Award finalist and the internationally published author of the Nashville-based Jared McKean private detective series.

Terrell is the winner of the 2017 Killer Nashville Builder Award, the 2017 Golden Quill Award for service to the Southeast Chapter of Mystery Writers of America (SEMWA), and the 2009 Magnolia Award, also for SEMWA service. She's a member of MWA, Sisters in Crime, International Thriller Writers, and Private Eye Writers of America.

A former special education teacher, Terrell has a red belt in Tae Kwan Do, a certification in equine massage therapy, and a passion for ballroom dancing. When not writing, Terrell is a writing coach who leads in-person and online courses and workshops on the craft and business of writing fiction.

A Cure For This
5.0 out of 5 stars TROUBLE MOST EXCELLENT!
Reviewed in the United States 🇺🇸 on October 9, 2019
Verified Purchase
Jaden Terrell's brisk & clever TROUBLE MOST FAIRE is a most welcome addition to the Familiar Legacy Series, & will delight all the followers of Trouble himself, that wily & self-satisfied feline Sherlock Holmes. Terrell's TROUBLE will show an additional stylistic range to her avid Jared McKean fanbase, as well as provide any murder mystery aficionado with more plot ingredients & medieval flavor than the secret recipe for Richard The Lionhearted's Bread & Butter Pudding.

Terrell's noted hallmarks are firmly in place: distinctive characters with highly-personal motives; a compelling & unusual setting (in this case, a Tennessee Renaissance Faire & its denizens); suspense/murder/mayhem; & genuine insights into the nobility--and nastiness--of the human psyche. Add thwarted passions, budding & nipped-in-the-bud romances, & an assortment of literary & pop-culture allusions into this cunning concoction, & the reader is given an intriguing collection of tarnished knights & their not-so-fair ladies competing in deadly jousts of danger & deceit.

Especially effective is Terrell's attention to detail in creating, describing, & sustaining the Ren Faire World of swordsmanship, falconry, archery, & The Tarot. Equally noteworthy is the dry wit of Trouble, the cat protagonist, which is most readily directed at Tuck, his faithful, if bumbling, porcine sidekick.

For those who enjoy a fast-paced, precisely plotted murder mystery as intense & stimulating as a mug of aged mead, TROUBLE MOST FAIRE will more than satisfy. Jaden Terrell's established & growing reputation as a master of this genre is as sharp, shiny, & chillingly effective as the foul play--and the sword play--that is artfully woven throughout this most excellent & thoroughly entertaining tale.

As for Richard The Lionhearted's secret recipe for Bread & Butter Pudding? For that, Fair Ladies & Noble Knights, you will just have to read the book...
Read more
One person found this helpful
Helpful
Report abuse

Trouble, the sophisticated detective with a British flair, Tuck, the truffle-sniffing assistant, and a host of wildly different bipeds, lead the reader down a path with so many twists and turns, you’ll swear you were at Dollywood on the Lightning Rod Roller Coaster.

The action begins with Robbi Bryan, nursing emotional wounds from a relationship gone bad, hopes a change of scenery and her best friend, Laura, will provide much-needed support and comfort. Unfortunately, Laura is murdered shortly before Robbi arrives in Sherwood, Tennessee, home of the Renaissance Faire.

Trouble, along with his partner, leaps into action, well, Trouble, the black cat leaps. Tuck, the pot-bellied pig, not known for leaping or climbing abilities mostly sniffs the ground in search of clues.

Add enough suspects to supply a murder mystery dinner party and you have a fast-paced, beautifully written addition to the Familiar Legacy Series.

While Robbi, and the rest of the gang, work tirelessly to solve Laura’s murder and get to the bottom of other strange and deadly events, the real stars are the four-footed and winged (Falcon) investigators.

SYTanner
5.0 out of 5 stars Trouble Most Faire is some of the best reading fun I’ve had in a while
Reviewed in the United States 🇺🇸 on October 9, 2019
Verified Purchase
Ms. Terrrell writes with extraordinary flair and her latest offering, Trouble Most Faire, carries it well!
What might you find at a Renaissance Faire in Sherwood, Tennessee? Why, castles and moats and falcons and a potbelly pig! And Trouble, as well, a svelte, black cat detective with a Brit’s panache.

Well, and more than a few interesting bipeds who all seem to have a secret. Or three! Robbie, the beautiful falconer with a wounded heart, who arrives on the scene within minutes of her best friend’s murder. Mal, the kilted Scottish Laird—no, really, he is. Cara, a knife-throwing Magician’s assistant turned Tarot card reader. And Guy, who … well, you get the picture.

Who are the suspects? Everyone, it seems.

What’s at stake? The majority of shares for the Ren Faire, some of which Laura held at the time of her murder. And there you have motive.

Unfortunately, the investigation lies in the less than skillful hands of the local sheriff. Realizing this is a crime unlikely to be resolved without his assistance, Trouble steps up to take the lead accompanied by one potbellied pig named, Tuck, determined to be his sidekick for the duration.

As a series of challenges is issued to determine control of the shares, missing and otherwise, Trouble has his paws full. The challenges are intended to be deadly—and almost are.

Trouble Most Faire is some of the best reading fun I’ve had in a while and gets five solid stars from me.
Read more
One person found this helpful
Helpful
Report abuse

Nancy Sartor
5.0 out of 5 stars WONDERFUL STORY. WONDERFUL CHARACTERS. A MUST READ
Reviewed in the United States 🇺🇸 on November 2, 2019
Verified Purchase
I am among Terrell's most ardent fans. Her talent shines through all her works, but this one is a change from her usual fair. Trouble is a familiar character, making it necessary for the writer to be true to the former development or risk the ire of her readers. Terrell pulls it off perfectly. As always, her characters are all fully developed. In this sense, this writer is almost magical. For a cozy, the story delves into some dark corners, always appropriately but giving this reader the meat I usually miss in a cozy. The touch of romance is handled deftly as is the conclusion. This is a must read whether you've been a Trouble reader in the past or not.
Read more
Helpful
Report abuse

Linda Thorne
5.0 out of 5 stars Fun Mystery
Reviewed in the United States 🇺🇸 on December 18, 2019
Verified Purchase
The protagonist, Robbi Bryan, was a character to love throughout the book. It was a joy to get inside her head as she tries to solve the mystery of her friend's death as well as that whole other mystery going on with the group of people who were connected to the friend she finds dead upon her arrival. There are always pets in Terrell's books, but the role of the cat called Trouble served a different (interesting) purpose in this book. The character of the little pig was an added bonus.
Read more
Helpful
Report abuse
See all reviews
Report an issue
Does this item contain inappropriate content?
Report
Do you believe that this item violates a copyright?
Report
Does this item contain quality or formatting issues?
Report