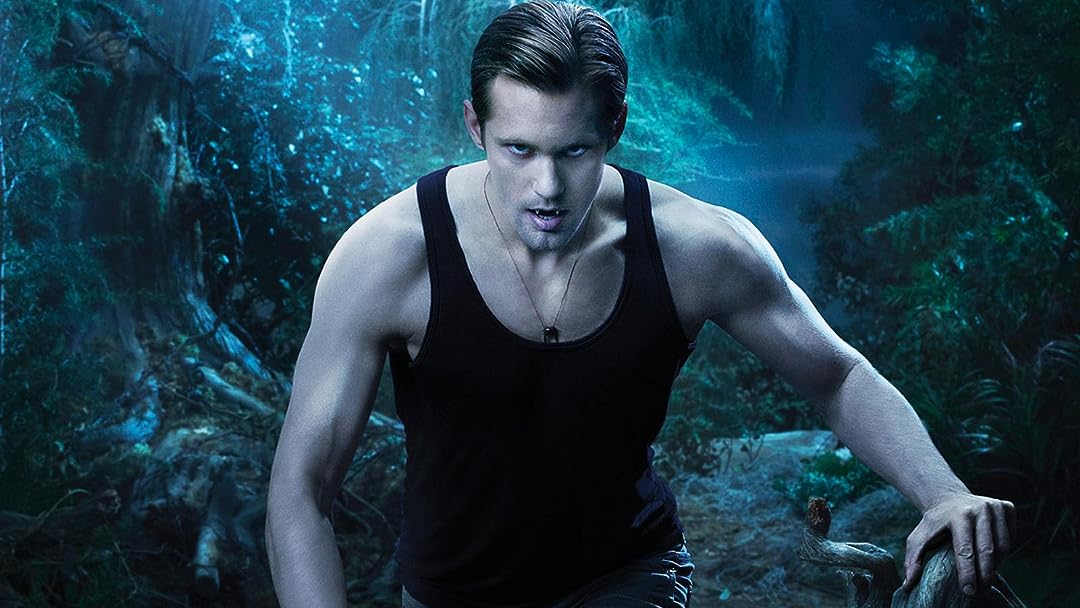 (10,934)
7.82008X-RayNR
[HBO] Vampires have come out of the coffin in this hit HBO series starring Anna Paquin and based on the best-selling novels by Charlaine Harris.

Ren HauteReviewed in the United States on November 28, 2017
4.0 out of 5 stars
If you're looking for entertainment this is the show for you. Looking for something serious and intellectual then move on.
Verified purchase
The show really took a long time to grow on me. Then my feelings about it kept changing. It went from disliking it, loving it, feeling blah about it, and this is kinda dumb. By the 7th season I'm back to loving it. It may start off a tad bit slow but it gets more interesting as the characters develop. There are a few characters/actors in this show that really draw you in and is seriously what makes the show. First place, hands down, goes to the actress who plays Eric's progeny Pam. Then it's a tie between several others. Love the characters Lafayette, Jessica, Eric, Arlene, and Alcide. There's probably some more, but these are the ones which stand out. If you're thinking about watching this show be prepared for a lot of fantasy type topics. It's not just about vampires. There are werewolves, fairies, shape shifters, witchcraft and black magic. A bit unrealistic, but nevertheless you won't be bored. It's HBO so you know there will be your fair share of violence, nudity, sex, blood, and gore. The blood and gore isn't over the top though.
18 people found this helpful

GaryReviewed in the United States on February 7, 2017
5.0 out of 5 stars
Author Charlaine Harris did a wonderful job with Sookie
Verified purchase
I heard all the audio books in the Sookie Stackhouse series. Author Charlaine Harris did a wonderful job with Sookie. At first, I had a bit of adjustment to make, because the story line leaves the printed books. They took a left turn from the path, and never looked back.
I gave True Blood a chance, and found it very entertaining. Somehow, True Blood stays true to the characters, if not so much to the story line.
I recommend the entire series to anyone who likes dark comedy, light horror, quirky characters, and a healthy dose of sexy situations.
Not for children.
I also highly recommend the books, by Charlain Harris

The Best ReviewerReviewed in the United States on January 3, 2017
5.0 out of 5 stars
As a Southener, I approve!
Verified purchase
Pilot season: As a southerner, a lot of elements are spot on-small town living, bible thumping hypocrites, everyone in town knows everyone etc. It was interesting & refreshing to see how racism was mainly focused on human race vs the supernaturals & not skin color (for the most part).I loved that the narration didn't tell us what was going on like most tv shows. You kinda have no clue what's gonna happen next & that's the best part!
17 people found this helpful

DisneyDenizenReviewed in the United States on February 18, 2019
5.0 out of 5 stars
Here There Be Vampires
Verified purchase
True Blood aired for seven seasons from 2008 to 2014. It was based on the Southern Vampires Mystery novels by Charlaine Harris. The series revolves around telepathic waitress Sookie Stackhouse and is set in backwoods Louisiana. The basic premise is that with the introduction of a synthetic blood beverage, vampires can now come out of the coffin and mingle with humanity. Just like in Twilight, Sookie is forever having to choose between her various male suitors.

PROS:
It is campy good fun!
Storylines are interesting.
Acting is excellent.
When Alexander Skarsgård shows up as brooding Eric Northman, things really get good.

You should also be aware that the sex is very graphic.

FredJHReviewed in the United States on July 21, 2015
4.0 out of 5 stars
Great show for fans of the supernatural.
Verified purchase
Good take on the vampire genre; much better than what's available on commercial TV. A lot of interesting and varied characters and, of course, a lot more supernatural creatures than just vampires.

The gist: "Tru Blood" is a synthetic blood that allows vampires to not have to feed on humans; after it's release, vampires "come out" and try to integrate with society at large. In the first season, "Bill the vampire" comes back to the town he lived in during the Civil War era to claim his now unoccupied home (his last descendant has passed); the house is conveniently near the home of Sookie Stackhouse (the main character, and the name of the books the show is based on).

We get a glimpse of vampire laws and hierarchies, along with the typically human nature of vampires who don't want to integrate; there are politics of "equality" that parallel some real present day movements (marriage between vampire and human, for example); intolerance on both sides, and of course, a lot of sneaky, underhanded actions by characters with dubious intentions.

Drug use is also one of the main themes, with humans taking "V" (vampire blood) for the rush it gives them: heightened sex drive, shared visions and experiences - it's different depending on user and vampire the blood came from.

A lot of death, a lot of sex, a lot of very funny moments - my wife and I really enjoy it.
23 people found this helpful

TsathogguaReviewed in the United States on October 23, 2015
1.0 out of 5 stars
I thought I heard this was a popular show; surely I heard wrong
Verified purchase
I love fantasy stories. I love vampires. I love boobs. But this show somehow manages to take all of the above, mix it together, and turn it into something awful. 0 stars if it were an option. If you must watch it, watch it with the volume off and make up your own plot and dialogue; it'll be much better.
None of the characters are sympathetic. All of them are the worst stereo types you can imagine for their race and economic status.
The obvious intended analogy between the show's Vampire Rights Movement and real life rights movements is insulting, because the vampires actually are as bad, even worse, than the 'bigots' think; even the 'good' vampires are prolific serial killers, and the rest are just pure monsters.
The cars are cool, though. They found a really good collection of iconic vehicles from the 60's through the 80's, and then somehow expect you to believe a bunch of no-income, no-autophilia nobodies are able to afford and maintain them. The lead character, a waitress, drives a mint condition 83 civic 3 door; the bar owner has a mint condition 67 bronco; the two desperate and broke drug addicts drive a $30,000 TR6; the cook/drug dealer/prostitute has a 80's Mercedes SL; the trio of vampires has a 76 lincoln 2 door; etc.
13 people found this helpful

Level Headed GalReviewed in the United States on February 26, 2015
5.0 out of 5 stars
If you're looking for a series with a great story line and exceptional acting, this one is definitely worth viewing
Verified purchase
True Blood is an excellently written series. I have watched it since it began, and recently bought this dvd set for my nephew. It is nothing like the Twilight series, and in my experience, people who really love Twilight usually do not care for this series - again, simply because the two are nothing alike. Some of the main characters here (as well as supporting roles) are vampires, but that's not to say this is a show "about vampires." This series is really best described as being about the people and goings-on of a small, backwoods Louisiana town where some of the people just happen to be vampires.

As mentioned above, the writing is excellent. One of the best aspects about this series is that it is definitely NOT predictable! Not in the least. You never know where the writers are going to take you...from one episode to the next, or from one season to the next. The character development, story lines, acting, directing, casting and effects are all first rate. Considering that the series has its fair share of killing (although not overly so, and it's certainly not the focus of the show), the series couldn't be called "dark" or gory by any means. I also would not call this show necessarily "violent" either. (Personally, I don't care for violent shows or movies, and I find this series to be tolerable on the violence scale. It does have killing and blood and bodies and body parts, after all there are vampires in it, but even so, it's done in a way that is not offensive or vulgar.)

There is comedy, drama, action and suspense...and very well choreographed cliff-hangers to end each episode. Despite the blood, death and suspense, the series as a whole is well balanced with comedy and other character's story lines which help keep it from being overly dark. There is a quite a bit of nudity - not raunchy, but tasteful and almost artful. So if you're sensitive to nudity, just be forewarned...or simply cover your eyes during those parts, because the story lines and acting make this series well worth watching.) I easily give 5-stars to every season.

Another refreshing bonus is that the episode commentary for every season is also worth watching. The actors, directors and writers actually contribute thoughtful and interesting tidbits that add to the episodes and the series. It's best to watch the commentary after you've completed the season because sometimes they accidentally reveal things that happen later in that season.

This series is well worth purchasing.
7 people found this helpful

F. PiccinoReviewed in the United States on March 20, 2015
3.0 out of 5 stars
Still On The Fence
Verified purchase
Allow me to start off by saying that if anyone asked me, I would tell them to give the show a shot because tastes are different and you never know what you or someone else will get out of a show. I would also say the acting by most of the cast is very good, if not excellent and the campy vibe of the show is fun. That aside, two particular characters and their story lines are making it very difficult for me to want to keep watching. The issue is that they are 2 major characters: Jason Stackhouse and Tara Thornton.
Tara has potential. Her sass is great, but then she pulls a 360 and turns into an abrasive jackass. I understand she had a rough time growing up, but that seems to be all she is about for the writer's in season 1.
Jason. Oh sweet Lord what a friggin' moron. From his first appearance on the screen I have wanted to take a 2x4 to his head. (This is a compliment to the actor because clearly he does his job beautifully.) He is dumb and always naked and screwing someone. Funny and surprising? Yes, the first few times. After that, it hits jumping shark territory and I am only on episode 9!!
What is not a good sign is I am skipping over scenes of these two particular characters because I cannot relate in any fashion with their lives.
The only saving grace right now is the growing presence of Eric and Pam. Here's to hoping it gets better!
2 people found this helpful
See all reviews
Back to top
Get to Know Us
Make Money with Us
Amazon Payment Products
Let Us Help You
EnglishChoose a language for shopping. United StatesChoose a country/region for shopping.
© 1996-2022, Amazon.com, Inc. or its affiliates