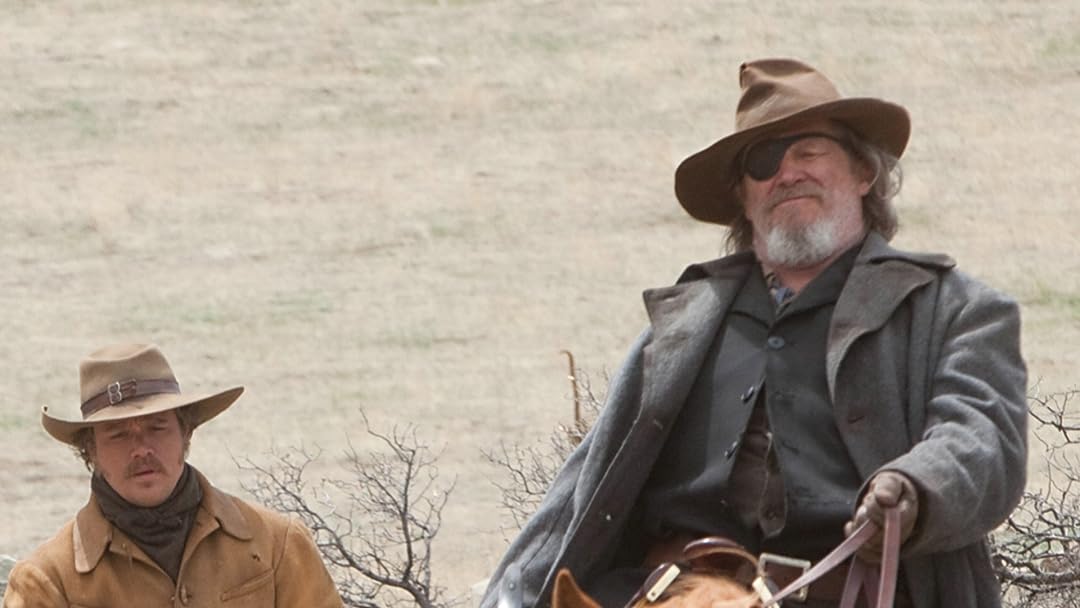 Janie JunebugReviewed in the United States on September 5, 2016
5.0 out of 5 stars
GOD BLESS THE COEN BROTHERS AND TRUE GRIT
Verified purchase
I love, love, love True Grit. It's beautifully made -- great lighting, cinematography -- and the dialog is hilariously witty and delivered so dry pan that it's made even more delightful.

To top it all off, the acting is first rate. Jeff Bridges makes an amazing Rooster Cogburn -- I was afraid he would just be Bad Blake in the West but not so; I did not realize immediately that LeBoeuf is portrayed by Matt Damon -- it's a Matt Damon I've never seen before, and has there ever been a funnier pretentious braggart of a Texas Ranger?; and Hailee Steinfeld is perhaps the most outstanding of all as Mattie Ross whose grit is truer than any man's.

Along the way, our little group also runs into the likes of Josh Brolin as Tom Chaney, the object of the search because he killed Mattie's father and she will not be deterred from her quest to see him punished; and Barry Pepper as Lucky Ned Pepper.

I love the characters' precise way of speaking, their beautiful diction -- an interesting touch I don't believe I've ever seen in a western.

LaBoeuf: You are getting ready to show your ignorance now, Cogburn. I don't mind a little personal chaffing but I won't hear anything against the Ranger troop from a man like you.
Rooster Cogburn: How long have you boys been mounted on sheep down there?
LaBoeuf: My shaggy horse will be galloping when that big American stud of yours is winded and collapsed. Now make another joke about it. You are only trying to put on a show for this girl Mattie with what you must think is a keen tongue.
Rooster Cogburn: This is like women talking.
LaBoeuf: Yes, that is the way! Make me out foolish in this girl's eyes.
Rooster Cogburn: I think she has got you pretty well figured.

Mattie Ross is so tenacious that were she to grow up and become a lawyer, I would want her to defend me if I got myself into trouble, or I would want her to prosecute if someone wronged me. I particularly enjoy the sequence when she negotiates with Colonel Stonehill to be paid for her father's stolen horse, to get the money back for the mustangs her father purchased from Stonehill, and then gets one of the mustangs back to ride herself.

Mattie Ross: I guess I have a $10 horse. Tell Col. Stonehill I said 'Thank you'.
Stableboy: No ma'am. He said he don't never want to hear your name again!

I have only vague memories of the original True Grit. It came out in 1969 when I was but a sniveling milk-fed pumpkin of a child. I know John Wayne finally won an Academy Award for playing Rooster Cogburn. The original made so little impression on me that I didn't remember much of what it was about. Merely recall Rooster Cogburn's eye patch.

So see the old movie if you want to make a comparison, but I don't know that I'd waste my time on it. Go with today's True Grit and God bless the Coen Brothers.

Rooster Cogburn: [LaBoeuf has been talking about malum prohibitum and malum in se] It astonishes me that Mr. LaBoeuf has been shot, trampled, and nearly bitten his tongue off, and yet not only does he continue to talk but he spills the banks of English.

catch22Reviewed in the United States on July 30, 2019
5.0 out of 5 stars
A masterpiece!
Verified purchase
There was nothing I did not love about this movie! I am a huge fan of the Coen brothers films and had never seen this one. Boy was I missing out! I believe this is Jeff Bridges best ever role because he did not act like 'Jeff Bridges'. It was a masterpiece of style with large doses of humor and some really mungy characters. The acting was the best ever. Some of the scenes had a 'Quentin Tarantino' feel to me which I like. It was also heartwarming and had good character arch. Best thing I have seen in awhile. Thumbs up for me on this one!
29 people found this helpful

GwennyReviewed in the United States on July 3, 2019
5.0 out of 5 stars
Should've Bought it... dammit.
Verified purchase
Hoorahed by a little girl (Lol). First off.... Jeff Bridges is so hilarious that I forgot how to write a review. My favorite line of this movie and to the utter annoyance of everyone that knows me is..
"Killed the wrong man is the which-of-why i'm here" LOL. Hayley* Steinfeld*? is superb. I love when she slides her intro lines to Matt Damon. That banter is what my ex and I lived on for about 2 months (hence the ex). "If you wet that comb it might tame that cowlick". Even Josh Brolin managed to garner a chuckle that turned into a snort that made me fart in front of said ex. LOL "I must contemplate my current predicament and figure out how I can improve it". I'm mad I went the cheap route and just rented this. I love it so much that it's worth buying.... but I haven't quite spent 30.00 renting it over and over again. so... Enjoy
16 people found this helpful

SuperDogReviewed in the United States on July 6, 2019
5.0 out of 5 stars
All I can say is MUST SEE
Verified purchase
I'm not really a western kind of movie person and I wanted to see what all the hubbub was about from when Hallie got nominated for an Oscar. I was amazed with this movie. One of the best I've ever seen. You must see this even if you're not a western movie fan. Jeff Bridges.... WOW! No wonder he's been in this business so long. The true greatness of an actor is not seeing the actor playing a character, it's seeing the character he's playing.
17 people found this helpful

kevinReviewed in the United States on May 18, 2019
5.0 out of 5 stars
Amazing Movie - hard ending of true love
Verified purchase
I'd forgotten how tough the last 15 minutes were. My kids (age 6-16) and I cried.
Spoiler Warning Below

The main character is in a life or death situation and the leading man rides a horse to death to save her life. It is a tear jerking representation of how hard life could be in the Wild Wild West, but the rider gives everything he can to save this little girl and it is very touching. I only say this because kids watching who have not been exposed to death & understand that the horse gave its life to save the girl may be upset.
16 people found this helpful

Panama Redd Reviewed in the United States on December 21, 2017
5.0 out of 5 stars
Better than The Duke ??!!
Verified purchase
A new retelling and a new classic ! I didn't watch this until a few months after my purchase . I didn't really think too much of the old John Wayne version . I just couldn't believe that Jeff Bridges could pull this one off . Boy , was I wrong !! This movie rates with the greatest all time Westerns !! His attitude , his look and demeanor are perfect ! Hattie Steinfeld who plays Mattie is perfect , Matt Damon was perfect as the Ranger ,and the rest of the cast were as good in they're roles ! Too bad there can't be a PT. 2 !!!
19 people found this helpful

joel wingReviewed in the United States on August 8, 2020
4.0 out of 5 stars
Ross character drives movie as she acts as a force of nature to hunt down man that killed her dad
Verified purchase
True Grit was the Coen Brothers remake of the famous John Wayne western. Like the original the story is based upon the odd couple of the headstrong 14 year old Matti Ross (Hailee Steinfeld) who hires the drunk U.S. Marshall Rooster Cogburn (Jeff Bridges) to hunt down the man Tom Chaney (Josh Brolin) that killed her father. Ross acts like a force of nature telling Cogburn and others their business and driving them on when they aren’t interested or too much with drink to move. She also wants to kill Chaney with her own hand. Cogburn when given the circumstances is a good tracker and knows his way around criminals and guns. As Ross says he’s got “True Grit.” The differences between the two drives the adventure they go on.

The movie lacks the usual quirky moments of a Coen Brothers production. The closest to that is Matt Damon’s character of Texas Ranger LaBoeuf who likes to hear the sound of his own voice.

It is in line with the revised Westerns that began in the 1970s where there wasn’t the stark difference between good and evil traditionally taken up in this genre. Cogburn for example loves to drink and doesn’t like taking prisoners.

Overall, it was a very good film with Ross really being the star.
C
3 people found this helpful
See all reviews
Back to top
Get to Know Us
Make Money with Us
Amazon Payment Products
Let Us Help You
EnglishChoose a language for shopping. United StatesChoose a country/region for shopping.
© 1996-2022, Amazon.com, Inc. or its affiliates