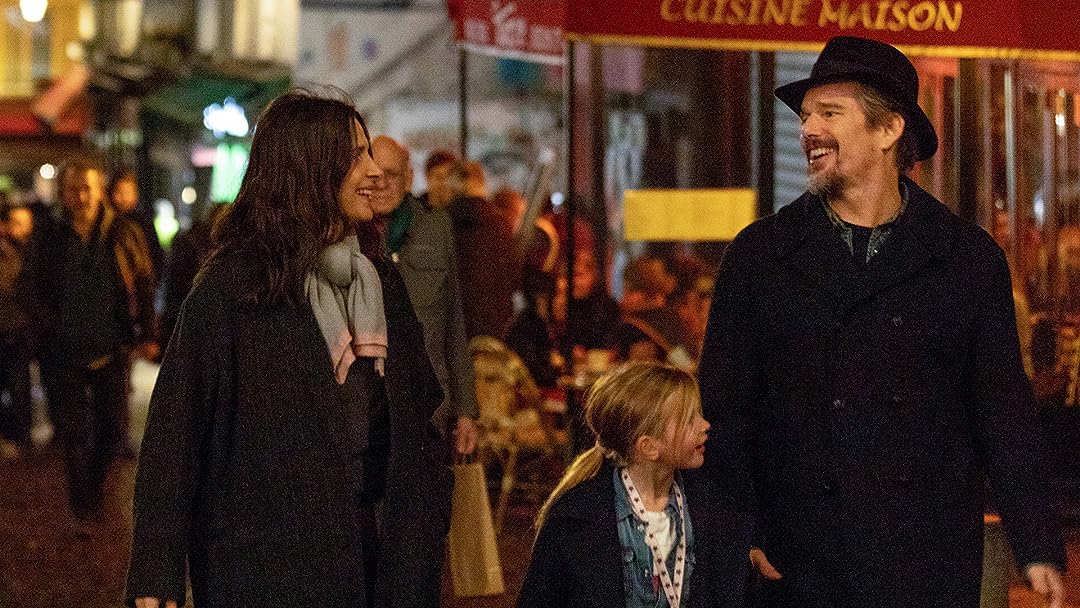 (1,137)
6.51 h 47 min2020X-RayPG
When aging French movie star Fabienne publishes her memoirs, her daughter Lumir travels to Paris with her family to commemorate its release. But dramatic and funny conflicts ensue when Lumir challenges her mother’s fabricated versions of the past.

Ethna M. O'SheaReviewed in the United States on July 20, 2020
1.0 out of 5 stars
BAD SUBTITLES
Verified purchase
i am actually writing this so I can get a refund for renting this movie. Subtitles were awful. Every time someone spoke French it would say "speaking in a foreign language" right across the subtitles. It was ridiculous. Ruined the move for me. Would like my money back please,. Don't know where else on the website I should put this complaint. Thank you.
20 people found this helpful

Odelli OzerReviewed in the United States on July 6, 2020
1.0 out of 5 stars
Demand Refund due to blockage on subtitles
Verified purchase
MAJOR PROBLEM WITH SUBTITILES - the first line of every actors comments was completely covered with text ‘FOREIGN LANGUAGE. and illegible. This really ruined the movie - please refund my payment and correct the problem for others
18 people found this helpful

JLGReviewed in the United States on July 5, 2020
2.0 out of 5 stars
Meh
Verified purchase
Skip it. As always Deneuve and Binoche are masterful, but the movie is otherwise meh. Ethan Hawke seemed like he was in an altogether separate movie and somehow did not fit the register of this movie. That's too bad because he certainly has the talent and it would have been wonderful to see him in a worthy role with Binoche and Deneuve.
12 people found this helpful

M. OlesonReviewed in the United States on September 13, 2021
3.0 out of 5 stars
3.5 stars. A minor dramady, family film starring a pair of great French actresses.
Verified purchase
Possible spoilers. As a young man, I fell in (movie) love with Catherine Deneuve although I’m not sure which movie. Maybe “Belle de Jour” and I wasn’t alone. I seem to recall she was voted the most beautiful woman in the world. She’s still around and is the lead in this movie playing a 70-something French movie star whose best days are behind her. On the occasion of her just published memoir, Fabienne’s daughter Lumir (Juliette Binoche), her husband Hank (Ethan Hawke) and granddaughter Charlotte (Clementine Grenier) will be visiting from New York. Lumir is a scriptwriter, Hank a minor actor in American films.

The film is in French and English but mostly French, a language Hank struggles with. Everyone could speak English when Hank is present but they don’t, mostly because Fabienne doesn’t fully appreciate the American, although all evidence shows he is a good husband and a doting father.

Fabienne is not a happy woman, losing her star-power and seemingly was never a warm person. Lumir and her mother are constantly at odds, which is exacerbated by the memoir which Lumir feels is more fiction than fact. Fabienne portrait of herself would be inconsistent with the facts of which Lumir is happy to point out.

Fabienne is to have a small role in a film being made which will star Manon Lenoir (Manon Clavel). It is a science fiction film where Manon’s character goes into space and doesn’t age, when she comes back her daughter is older. First the daughter is another famous French actress, Ludivine Sagnier. Returning to space again and again returning, the daughter is played by Fabienne. So now the mother looks 30ish and the daughter is 70ish.

Some of these movie within a movie scenes are quite good as is the movie. However there really isn’t anything that sets the movie apart from many others with a similar story line. The film was written and directed by Hirokazu Koreeda whose films generally feature family themes. I got the feeling he just let the actors do their thing in this film. I’m not familiar with his other work. It was great fun seeing 3 of my favorite French actresses at work here and Deneuve and Binoche are terrific. Hawke mostly plays with his character’s daughter and struggles with the French language. This was a pleasant 106 minutes that will likely soon to be forgotten.

prisrobReviewed in the United States on July 12, 2020
3.0 out of 5 stars
Acting Is My Life
Verified purchase
French actress Fabienne, played by Catherine Deneuve and her daughter Lumir, played by Juliette Binoche, are ensconced in a film that has such great potential. Lumir, her husband and daughter have gone to Paris to discuss Fabienne’s memoirs. She had promised Lumir she could read it first, but, of course, she did not. It seems Fabienne made up some of her life to fit the story she wanted to tell. This is the life Lumir had lived, mom not there, but papa was.

Memories are not always correct is one lesson. The other lesson is that Fabienne does not want to change, and this film really has no storyline. This is a nice little family, never really talking to each other. Each person has their own perception of what life was like. I kept watching to see the story develop. A few emotions were spent, some understanding takes place, and, then....

A lot of smoking in this film, and drinking wine. A little truth is revealed, and some feelings opened. But it is the acting life that Fabienne loves, and it enters into all facets of her life.

SociologyReaderReviewed in the United States on October 10, 2020
3.0 out of 5 stars
Not much is "charming" about a narcissistic mother
Verified purchase
This is an interesting film, though it is very lacking in some ways. The description makes it seem like it's charming and about "growth," but in my view, it's not that at all. Rather, it is about a daughter who has been "raised by" a narcissistic mother, whose sole focus is on being a great actor.

We can see how exhausted Juliette Binoche's daughter character is (like many adult children of narcissists {ACONs]) just by looking at her. She and her husband (Ethan Hawke, who may seem out of place but is a choice totally in line with the ACON dynamic) purportedly go to visit the mother to celebrate the publication of the mother's "memoirs," which were an unusual version of "truth." But really, I think that the daughter has gone to try to make sense of this odd mother-daughter "relationship" -- to get some resolution about it.

But what is the resolution? Is there one? I do not want to give spoilers, but the last 20 minutes of the film sugar-coat the relationship a lot. There is a LOT in this film that suggests that the writer knows some of the significant dynamics of relationships between narcissistic mothers and their daughters, but I think that the last 20 minutes of the film did not follow through on what could have been a more empowering outcome -- for either the mother, the daughter, or ideally both.
3 people found this helpful

Books McGulliganReviewed in the United States on July 12, 2020
4.0 out of 5 stars
Great Performances, Writing and Directing
Verified purchase
I enjoyed this film. Well acted and beautifully shot. Tight and smart editing. All actors terrific but the real star and the little girl was wonderful and very natural.

My complaint is this - why not do flashback scenes with the Manon character playing Sarah (and wearing the dress back in the day), show her acting, show the resemblance between the two women. I think there are wasted scenes - especially they amount of time spent on set. The amount of time spent on Manon character who did not have the credibility in the movie they were trying to give her. Her smile seemed so phoney in some places and she did not come off as acting natural.

The story between the two sisters was a very big story and was not developed properly.
2 people found this helpful

Concerned ParentReviewed in the United States on August 2, 2020
2.0 out of 5 stars
One star for Juliette Binoche, and one for the little girl...
Verified purchase
I rented it despite the high percentage of really bad reviews, thinking it couldn't be THAT bad... And I speak French, so the language-related negative comments didn't scare me. My conclusion is, it wasn't THAT bad, but it wasn't good either! Wow, I don't understand how an actress of Binoche's caliber could put herself in such an uninteresting story. Catherine Deneuve was mediocre, and Ethan Hawke, though great to look at, seemed to be asking himself the same question I was asking, "why did they bother to write his role into this movie?". Not a total waste of money, but a bit of a waste of time.
3 people found this helpful
See all reviews
Back to top
Get to Know Us
Make Money with Us
Amazon Payment Products
Let Us Help You
EnglishChoose a language for shopping. United StatesChoose a country/region for shopping.
© 1996-2022, Amazon.com, Inc. or its affiliates