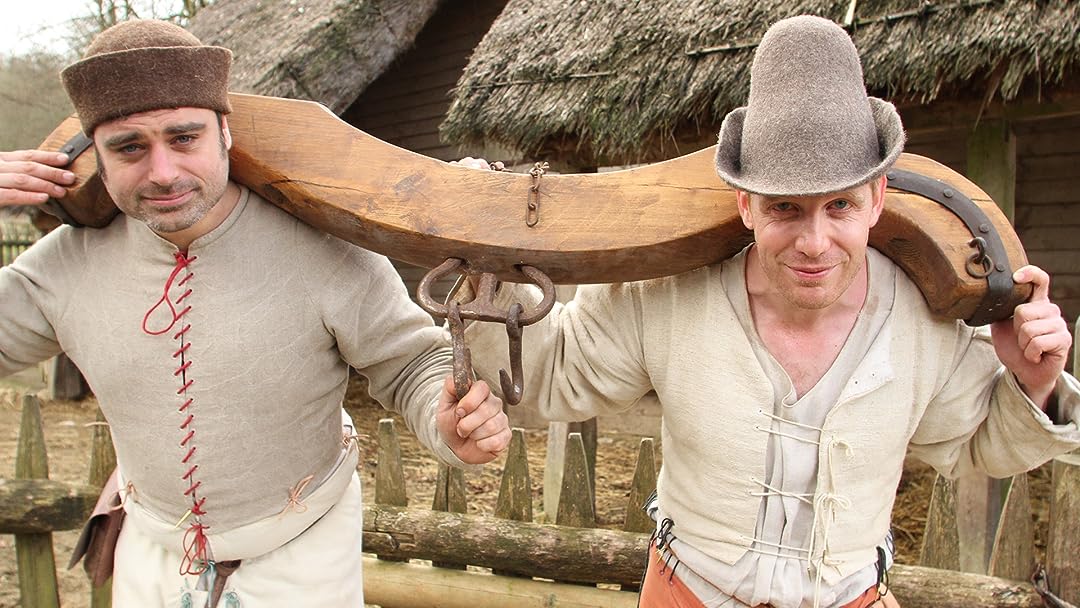 Season 1
(361)
20137+
Archaeologist Peter Ginn and historian Ruth Goodman, who is also a leading specialist in Tudor domestic life, return to front this six-part series, joined this time by archaeologist Tom Pinfold. The team turns the clock back to the year 1500 to take on the role of the lay-folk who did the bulk of the farming and crafting within monastic lands.

Shopping NannyReviewed in the United States on January 26, 2021
5.0 out of 5 stars
Going back in time with my favorite time travel team.
Verified purchase
I have enjoyed all the historical reenactments that Ruth Goodman and Peter Ginn have been in. And in this version of Tudor Monastery Farm I was sad to see that Alex Langlands wasn't part of the cast but Tom Pinfold. While, I love the chemistry between Ruth, Peter, and Alex in other projects I found Tom to be a little stiff in this one compared to the others. I was also disappointed that the Tudor Monastery Christmas episode wasn't included with this series I don't know if that's because it was produced a year later after they had completed the previous one but I wish they had a DVD available for that special.
2 people found this helpful

“Lord let us remember just how much effort goes into putting food on the table.” Peter Ginn’s mealtime prayer may not have been in the idiom of the time, but in spirit it captured exactly the essence of Tudor Monastery Farm.

Ever since Tales from the Green Valley, when Ginn and his historian colleague Ruth Goodman recreated living conditions on a Stuart-era farm in England, they have been bringing history brilliantly to life on BBC Two. How machines revolutionized the traditional ways of farmers was the focus of their follow-ups on Victorian, Edwardian and wartime England.

But here they ventured a full five centuries back to an almost recognizably primitive pre-industrial era, where the only machine in the village was a tread-wheel for drawing water from the well.

This was a world in which almost everything – from houses to tableware – was hand-made from wood, windows had no glass, and what light glowed after dark was cast by rush stalks soaked in boiled pig fat. Food was not bought but reared or grown, fields were ploughed by obstreperous oxen, and peas were a staple food alongside bread and beer because potatoes hadn’t yet been discovered on the far side of the Atlantic. Every resource was natural, and all the more precious because so hard-won.

But the point made most forcefully was that it wasn’t just farming that was different 500 years ago. Pre-Reformation England emerged as a fundamentally different society, with Catholicism and its rites infusing every element of daily life. As tenant farmers Goodman, Ginn and a newcomer to the series, archaeologist Tom Pinfold, worked land owned by the local Benedictine monastery, and paid their rent in wool.
As ever Goodman was brilliant at picking out the fine domestic detail and the menfolk demonstrated just how much grunt and resourcefulness was needed to make the land yield its bounty. Overall it wasn’t the recreation of hardship and toil that impressed as much as the remarkable sense of social evolution.

As ever Goodman was brilliant at picking out the fine domestic detail and the menfolk demonstrated just how much grunt and resourcefulness was needed to make the land yield its bounty. Overall it wasn’t the recreation of hardship and toil that impressed as much as the remarkable sense of social evolution.

Ruth Goodman is as giggly as a schoolgirl, and who can blame her? She’s seen her fascination with the Tudor times take her from being laughed at for her obscure hobby of historical re-enactment into an unlikely TV star.

And now – after experiencing farm life from the Edwardian, Victorian and Second World War periods for her hit BBC2 series – she finally gets a chance to experience life in her favorite era.

Ruth has been badgering producers of the popular farm series to do a Tudor version since it started four years ago. ‘That they finally listened is a dream come true,’ she laughs.

‘Aren’t I a lucky girl?’ Clearly she’s loved making Tudor Monastery Farm. But even she’s amazed at how much; she says it was not only one of the best times of her life, but an experience that’s changed her forever.

margaret c.Reviewed in the United States on April 10, 2021
5.0 out of 5 stars
Learn something new
Verified purchase
Love learning how things worked in the past.
Wish I could try some of the crafts like working with rushes. I am watching the dvds again because there is just too much information to get it all the first time.
3 people found this helpful

MichigandererReviewed in the United States on March 29, 2016
5.0 out of 5 stars
Great series. Watch using Media Player in US.
Verified purchase
I enjoy living history, so this series is a treat. The focus is on life early in the Tudor period, around 1500.

I live in the US, so our DVD player doesn't play these disks. However, I am able to watch them on my computer using Media Player.

If you are interested in this period of history, I believe you will thoroughly enjoy this series. They have done a fine job on it.
13 people found this helpful

Ingram WallaceReviewed in the United States on August 27, 2019
5.0 out of 5 stars
Watch it on big PC monitor
Verified purchase
Excellent series. Very informative hands-on footage that re-creates life in these times. The cast is also very entertaining and have fun at it. May or may not work on a US DVD player as I have not tried it, but it plays fine on a newer PC in the disc tray
3 people found this helpful

jreitzeReviewed in the United States on July 24, 2021
5.0 out of 5 stars
Great series, fast delivery
Verified purchase
I have thoroughly enjoyed all of these sets of videos. They are well presented, historically interesting and peppered with a perfect amount of modern perspective to make them relevant. Now if I could just find a DVD copy of the Wartime Farm series my collection would be (I think) complete.
Rare Waves has been my source for most of these and they ship quickly with delivery being quite reasonable for an international order.
One person found this helpful

MattReviewed in the United States on January 18, 2016
5.0 out of 5 stars
Entertaining, engaging, and beautifully shot. Highly recommended for everyone as yet another stellar series from this group.
Verified purchase
Ordered this after watching Edwardian Farm on Amazon Prime. Really nicely filmed, entertaining, and informative. A real pleasure to watch whether you would normally have an interest in history or not. Truly engaging. Will be exploring more of the programs these three (or two of the three) have done.
3 people found this helpful

Laurie D. BrandtReviewed in the United States on May 22, 2022
1.0 out of 5 stars
Not for American DVR players
Verified purchase
This can't be played on American DVR players only on European machines. I loved this series, but couldn't play it. I ended up throwing it away. :-(
See all reviews
Back to top
Get to Know Us
Make Money with Us
Amazon Payment Products
Let Us Help You
EnglishChoose a language for shopping. United StatesChoose a country/region for shopping.
© 1996-2022, Amazon.com, Inc. or its affiliates