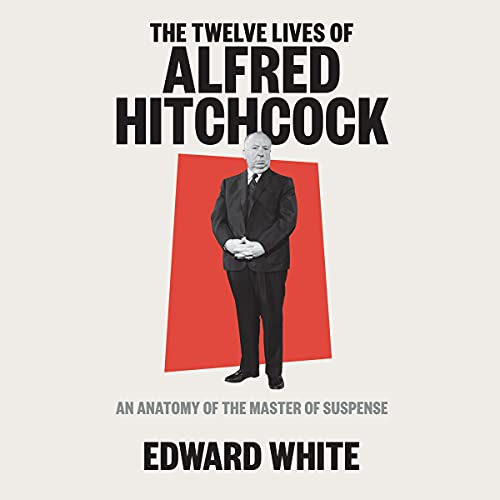 The Twelve Lives of Alfred Hitchcock: An Anatomy of the Master of Suspense

In The Twelve Lives of Alfred Hitchcock, Edward White explores the Hitchcock phenomenon - what defines it, how it was invented, what it reveals about the man at its core, and how its legacy continues to shape our cultural world.

The book’s 12 chapters illuminate different aspects of Hitchcock’s life and work: “The Boy Who Couldn’t Grow Up”, “The Murderer”, “The Auteur”, “The Womanizer”, “The Fat Man”, “The Dandy”, “The Family Man”, “The Voyeur”, “The Entertainer”, “The Pioneer”, “The Londoner”, and “The Man of God”. Each of these angles reveals something fundamental about the man he was and the mythological creature he has become, presenting not just the life Hitchcock lived, but also the various versions of himself that he projected and those projected on his behalf.

White’s portrayal illuminates a vital truth: Hitchcock was more than a Hollywood titan; he was the definitive modern artist, and his significance reaches far beyond the confines of cinema.

4.5 out of 5 stars
4.5 out of 5
172 global ratings
How are ratings calculated?
To calculate the overall star rating and percentage breakdown by star, we don’t use a simple average. Instead, our system considers things like how recent a review is and if the reviewer bought the item on Amazon. It also analyzes reviews to verify trustworthiness.
Top reviews

C. M Mills
TOP 500 REVIEWER
5.0 out of 5 stars Good Evening Ladies and Gentlemen! Read this great book on Alfred Joseph Hitchcock!
Reviewed in the United States on April 15, 2021
Verified Purchase
My shelf teems with about thirty books on Alfred Hitchcock (1899-1980). He is my favorite film director whose 53 movies have entertained millions of fans. Among his hits are Vertigo, The Man Who Knew Too Much (both versions), North By Northwest, Psycho, Spellbound, Rebecca, Jamaica Inn. The Wrong Man, To Catch a Thief, Dial M for Murder, The 39 Steps and many others. Edward White is a British critic who looks at the master of suspense by focusing on twelve areas of this complicated man's long life. Those dozen aspects of Hitchcock examined are: The Boy Who Could Not Grow Up; The Murderer; The Auteur; The Womanizer; The Fat Man (a fun chapter on how Hitchcock dealt with his obesity); The Dandy; The Family Man (his wife and collaborator was Alma; they had one child Pat who acted in a few of her Dad's films); The Voyeur (a good essay on Rear Window); The Entertainer (looks at Hitchcock's Alfred Hitchcock Presents work on TV and his ability at self promoting himself and his films); The Pioneer (a genius who used technical innovations-I enjoyed the material on his The Birds, Marnie and other movies) The Londoner and The Man of God (Hitch was trained in a Jesuit school and was a Roman Catholic).
The book is jargon free and easy to read. This 400 page book will give you a good understanding of Alfred Hitchcock. Recommended.
Read more
22 people found this helpful
Helpful
Report abuse

amachinist
VINE VOICE
4.0 out of 5 stars Danse Macabre in 12 Steps
Reviewed in the United States on April 23, 2021
Verified Purchase
This book is divided into a dozen chapters, each of which presents a different persona of the famous film director. Though most of the chapters seemed a bit of a stretch to make a point about Hitchcock, there were three chapters of particular interest to this reviewer.

In the first chapter, entitled The Boy Who Couldn't Grow-up, the author explores the childhood of Alfred Hitchcock. He was born in 1899, ten years after Jack the Ripper gripped the headlines of the English press. Hitchcock certainly knew about the unsolved murders and incorporated knife slashers in several of his movies. His childhood was not a particularly happy one. Two incidents in particular involving his parents, established lifelong phobias in him of the police, the dark, crowds, germs and other issues. At the age of 9, he was sent to a Catholic boarding school where painful corporal punishment was doled out everyday. He experienced the aerial bombardment of London during WW I. It heightened his fears of life's uncertain course. Danger seemed to him to lurk in the dark and the unexpectedly.

Most of all, Alfred Hitchcock is renowned as a film director. In chapter three, called The Auteur, the author explores Hitchcock's 60 year career spanning silent films, talkies, colored films and television. Hitchcock involved himself in not only directing the movie, but also every other aspect of the work including lighting, music, costumes and scripts, Though he at times had famous authors like John Steinbeck and Thornton Wilder writing the screen plays, Hitchcock attributed the scripts to himself. He considered cinema a high art form and he was the ultimate master of drama, voyeurism and suspense. He employed subtleness leading up to acts of murder most foul.

The final chapter, with the title The Man of God, details the role Catholicism played in Hitchcock's life and works. He was raised as a Catholic and reveled in the order, theater, mystery and pageantry of the mass, which he could recite by heart in Latin. He had been drilled as a pupil at the St. Ignatius College boarding school in the history of anti-Catholic persecution in Britain prior to WWI. He internalized the frequent themes of torture, pain and suffering, vengeance, shame, guilt, penitence and forgiveness. These served as lite motifs throughout his films.

Alfred Hitchcock remains an enigmatic film icon. This book, however, like his cameo appearances in his films, brings a bit more into focus the genius behind the camera.
Read more
12 people found this helpful
Helpful
Report abuse

beajerry
5.0 out of 5 stars The Best Way To Do A Biography
Reviewed in the United States on April 29, 2021
Verified Purchase
I am somewhat of a Hitchcock biography junkie and this is the best one I’ve ever read. Not only is it the best Hitchcock bio, it is one of the best bios in general!

Most biographies tend to follow a chronological template and while there’s nothing wrong with that, they often neglect the subject’s later life. They focus on the formative and exciting ‘hot’ years when the subject accomplished their claim to fame. The subject’s life is dutifully followed through whatever tragedy or triumph is most interesting for a time, and if a catharsis is included then that is obviously showcased, but often a healthy chunk of their life is just glossed over (the ‘unexciting’ part). And by doing this the subject’s life often comes off unfairly as depressing to the reader especially in the last chapters.

When bios do it right they give the subject’s WHOLE life, even the later years, full consideration. Two film bios in the past year about music artists did just that: Tina and Zappa. These gave wonderful attention to the artist’s FULL lives.

White’s solution/innovation is to approach the subject’s life in a non-chronological fashion and focus on different aspects that round out the person. In Hitchcock’s case White writes about “twelve lives” such as: “Tho Boy Who Couldn’t Grow Up,” “The Auteur,” “The Womanizer,” “The Dandy,” “The Pioneer.”

These angles overlap each other and flesh out a more complete picture of Hitchcock and his ENTIRE life. The good and the bad have better context.

As White writes in the intro, “…contradictions have encouraged astonishingly diverse interpretations of Hitchcock. The reading of him as lecherous ogre competes with the image of Hitchcock the uxorious husband. Hitchcock the brooding artist is countered by Hitchcock the vaudevillian. The dyspeptic misanthrope identified by some contrasts with the hopeless romantic that others recognize when they delve into Hitchcock’s filmography.”

His mythology, his genius, his flaws become more human when you deal with him as different components that make up a whole. You come away knowing him as a full human being, and that’s exactly what a biography should do.

Most surprisingly though, this approach also allowed a freer and deeper exploration into the details/technique of Hitchcock’s craft as a director (something many other bios have failed at).

I am excited for other biographers to follow White’s approach. It seems to be a much better and more satisfying way to write a biography.
Read more
10 people found this helpful
Helpful
Report abuse
See all reviews

Amazon Customer
3.0 out of 5 stars Author seems to be grinding an axe
Reviewed in Canada on July 18, 2021
Verified Purchase
Author is tightly focused on Hitchock's presumed expression of his Catholic upbringing. May be correct, but it;s the author's deduction and unsupported by facts.
Read more
Report abuse
See all reviews
Back to top
Get to Know Us
Make Money with Us
Amazon Payment Products
Let Us Help You
EnglishChoose a language for shopping. United StatesChoose a country/region for shopping.
© 1996-2021, Amazon.com, Inc. or its affiliates