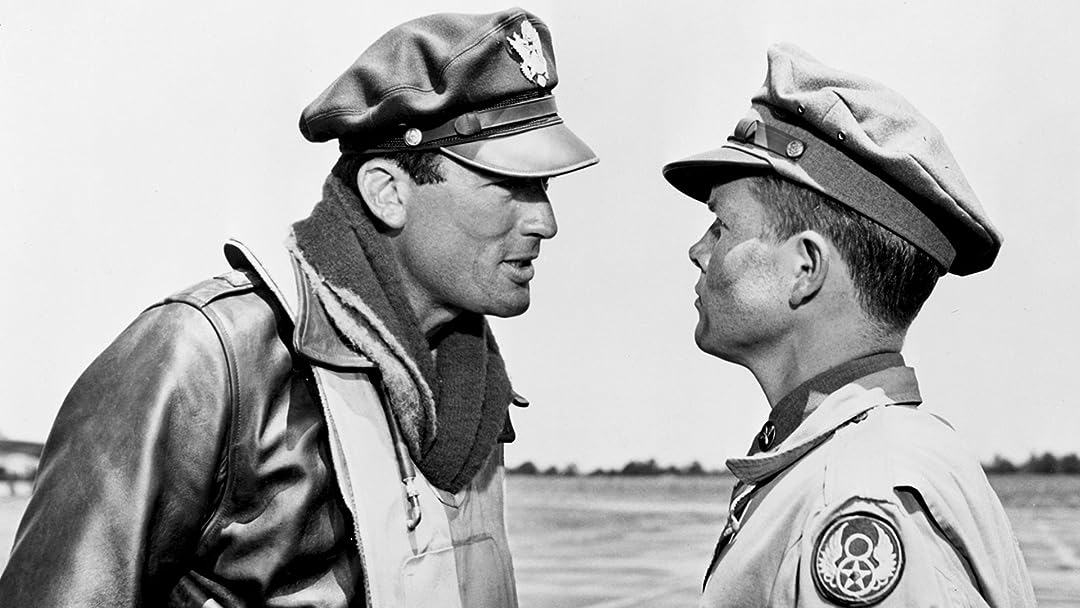 (1,980)
7.72 h 12 min19497+
This gritty World War II action drama staring Gregory Peck, Oscar winner Dean Jagger, Hugh Marlowe, Gary Merrill and Millard Mitchell is seen as one of the most realistic portrayals of the heroics and perils of war.

Clyde C. HelmsReviewed in the United States on November 30, 2018
5.0 out of 5 stars
Psychological Drama of Command and "Maximum Effort"
Verified purchase
The story is based upon the "cold hard realities of aerial warfare" (Br. Gen. Paul Tibbets, squadron leader), primarily the 306th Bomber Group and Col. Frank A. Armstrong. The movie portrays so many poignant moments; General Savage (Gregory Peck) relieving his long-time friend Col. Davenport (Gary Merrill) from command of the fictional 918th Bomber group, later the same General Savage unable to climb into his B-17, cracking up after too-many missions, the Toby mug which is turned around in the Officer's Club as a private signal ordering the aircrews to readiness, the retired Adjutant, Major Stovall (Dean Jagger) returned to London on business after the war, finding the Toby mug in a Bond Street antique shop sold cheap, then with his priceless parcel, driving a bike to the overgrown airfield where his memories of the men and their missions tell their story.
These men and what they did to preserve freedom ... it's too much to bear even now, and deserving of such a great ode. The movie is from the book and screenplay by Beirne Lay Jr. and Sy Bartlett, produced by Darryl Zanuck and directed by Henry King. Even my wife likes it.
20 people found this helpful

Robert and CarolineReviewed in the United States on November 29, 2018
5.0 out of 5 stars
Pecck at his best...A Real leader!
Verified purchase
Twelve O'Clock High is truly one of the all time great WW II films straight from the golden era of film-making in the late 1940’s. Gregory Peck is at his best in this film as he portrays a Brigadier General ( Frank Savage ) who has been thrust in to the leadership role of commanding officer in a bombing group that has suffered under poor leadership and a real lack of moral. Peck’s character transforms the lackluster bombing group into one of the best units to fly operations against the Germans in WW II. In the beginning, General Savage ruffles a lot of feathers as he demands a high standard of operational readiness and tight formations in each bombing raid. Eventually unit moral begins to change after he leads them on a mission (the first mission) where the group to strikes the target and all of the aircraft made it back safely. The tole and strain of leadership under such conditions on the General is profound and is an early example of shell-shock (PTSD) in film. My first exposure to this film was back in the early 1990’s when I attended a leadership course in the US Navy. Before this film I had no desire to watch a black and white film; boy was my mind changed with this film. The film’s dialog is first-rate, and the acting couldn’t be better. Twelve O'Clock High is a fantastic movie and should be on everyone’s list of war-movies to see; You won’t be disappointed.
9 people found this helpful

ImmerReviewed in the United States on May 2, 2021
5.0 out of 5 stars
Very Good Psychological War Film
Verified purchase
I’ve always appreciated the work done by Gregory Peck. Twelve O’Clock High is no exception. The black and white movie is more of a psychological drama than an action movie, when the hard core Peck replaces his subordinate squadron leader Gary Merrill, who is perceived to be too emotionally attached to his men.
Peck comes on strong as a no nonsense, emotionally detached leader, who looks at his men as unfortunately expendable in the early days of the USAAF attempts at precision daylight bombing of Nazi occupied Europe and Germany itself.

The viewer observes a transition in the Peck character, General Savage, from hard driving, to that of a upper level middle management character study trying to sell “the cause” to the airmen under his command, to the same state of emotional attachment that lead to the replacement Gary Merrill. A fine cast of supporting actors help sell this movie as authentic as per the time period.

The action sequences are at times riveting, yet contain stock footage of Luftwaffe fighters being shot down by USAAF fighters, not the defensive fire of the bombers (there was no allied fighter cover over Schweinfurt). Also, footage of P-47 gunfire substitutes for that of Luftwaffe fighters in close-ups. Considering this film was made in 1949, the aerial footage is not detracting from the storyline of the film.

This film is a very good psychological drama about men and war. Sure, at times, it contains what one may call cliché, but it is the mold upon which future movies of the USAAF bomber forces to come were patterned. A movie well worth watching.

LambertRecoveryReviewed in the United States on March 13, 2017
5.0 out of 5 stars
The greatest war movie of all time
Verified purchase
Their have been many great war films over the years Paths of Glory, Breaker Morant, Guns of Navarone, Saving Private Ryan and I've enjoyed them all. But 12 o'clock high, is still the greatest of all time as far as I'm concerned Its a story of great courage, and humility, and just as relevant today as when it was first made. Gregory Peck takes over the command of the 918th Bomb Group from Gary Marrile who's only 'flaw' is that he cares about his men--too much. In the end Peck learns he too is human self destructs in his own way. The battle scenes are not the reason to see this movie--the character development is. Everyone in this film does a superb job of supporting Peck and the dialogue remains crisp, & meaningful over 50 years later. This film spawned a TV show by the same name that starred Robert Lansing--it too is superb and you can watch the 2.5 seasons it ran for on Youtube.
13 people found this helpful

The Z ManReviewed in the United States on April 13, 2022
5.0 out of 5 stars
Brilliantly written and acted
Verified purchase
This is a well developed story, putting emphasis on the central character's flaw as he tries to pull a failing squadron of fighters and pilots into shape. His name is Frank Savage. This is symbolic, because he's frank with people, too frank in fact, and he savages his men. This demoralizes the very people he's trying to shape up, weakening his ability to do so. The story delves into his abuse on his men, and their effect on him. This, therefore, is deeper than the conventional fighter/air battle war film. This is a great character driven tale, the type that is rich with meaning, and from which we learn about life and ourselves. One of Peck's better films.

lclaurieReviewed in the United States on July 21, 2021
5.0 out of 5 stars
Classic Lessons on Military Leadership
Verified purchase
Besides just being a great story, this movie is a classic for any student of military leadership. Discipline, morale, interactions between superiors and subordinates, all these are covered if you care to listen. This movie's tone is a little dated, but the lessons are as valid today as they were in 1949, 4 years after the end of the Second World War. Sadly, our military and (to a greater degree) politicians weren't listening, and the "Peace Dividend" motivated them to gut our world-dominant military forces. The early debacles on the Korean Peninsula were a direct result. Anyway, a great yarn, and a lesson in military leadership for the ages.

Michael BReviewed in the United States on January 9, 2022
5.0 out of 5 stars
Still engaging and a great example of leadership 75 years later
Verified purchase
I first heard of this movie via my pops, but didn't watch it until after a co-worker mentioned it as a good demonstration of leaders making the tough choices for the sake of the mission while still being subject to human failings.

When I first watched it, I found it engaging and easy to follow. The live footage of 8th Air Force B17s certainly helped!

Years later I've watched it again, though this time with my kids. My 8 and 6 year old were enthralled. Though I did have to explain some sequences, they did follow it all the way through and really ate up the historic footage.

Classic Hollywood really is suitable for all ages.
See all reviews
Back to top
Get to Know Us
Make Money with Us
Amazon Payment Products
Let Us Help You
EnglishChoose a language for shopping. United StatesChoose a country/region for shopping.
© 1996-2022, Amazon.com, Inc. or its affiliates