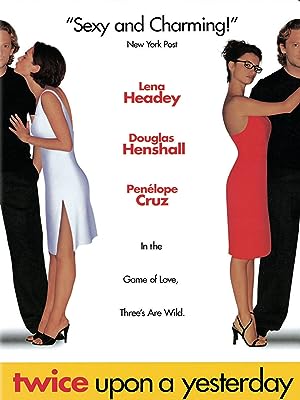 Twice Upon A Yesterday

(123)6.21 h 31 min1999R
Victor, an out of work actor, tries to stop his ex-girlfriend, Sylvia, from marrying another man. When she refuses him, Victor is miraculously given a second chance to go back and correct the mistake which led to their break-up.

Double HappinessReviewed in the United States on September 10, 2015
5.0 out of 5 stars
I ABSOLUTELY LOVED THIS MOVIE.
Verified purchase
This movie was a totally brand new story that should have been told a million times.

This movie was so sweet and full of emotion. The main emotions were regret and longing for what could have been and what should have been. And the hurt of losing someone, and the pain of knowing that it is all your fault that you lost it all, because you did something that you can't take back. The message at the end is about appreciating what you have while you have it, instead of appreciating it after it is gone and it is too late.

And this movie has time travel, which I love, but it is very subtle.
There is Fate, which is always there in time travel movies, with the reality that some things are meant to be, and no matter what you do to try to change it, whatever is supposed to happen must happen.

There is a twist at the middle that was so surprising and so different, and then there is another twist at the end that is bittersweet.

There is also the theory of "what goes around comes around" when the characters realize that what they did to someone later gets done to them.

The ending was sad and happy at the same time, and it made me feel good.

Victor was in love with Sylvia. But he began having an affair with Carol, a woman he worked with. He suddenly thinks that he is in love with Carol, so he confesses to Sylvia that he has been cheating. Sylvia breaks up with Victor.

Victor is free to be with Carol, but then their relationship fizzles out. Victor realizes that he has loved only Sylvia all along, and he decides to get her back. But, Victor finds out that Sylvia has moved on and is about to marry Dave, a guy that she met at the gym. Victor asks Sylvia for a second chance, but Sylvia is determined to marry Dave.

Victor spends the night out alone in the rain with a broken umbrella that is given to him, kicking himself for messing up what he had, which he didn't appreciate until he lost it. Victor meets two men who somehow push him back in time, back to the moment just before he destroyed his relationship with Sylvia.

Victor has a second chance with Sylvia, and he tries to get everything right this time. But Fate is always there in time travel stories. Sylvia meets Dave at the gym. Victor is afraid that Sylvia will want to be with Dave and tries to keep them apart.

The first twist happens when Sylvia is now the one to cheat on Victor. Sylvia has an affair with Dave and confesses to Victor that she has been cheating and she leaves him.

Victor is broken hearted once again, but this time, he meets Louise, and they fall in love.

Victor and Louise are about to get married.

The second twist happens when Sylvia realizes that she wants Victor back. Sylvia goes to Victor to ask if they can try again, but Victor tells Sylvia that he loves Louise and is going to marry her.

Someone gives Sylvia the same broken umbrella that Victor had, and Sylvia goes out alone in the rain, full of the regret that she wants back what she threw away, what she didn't appreciate until she lost it. Sylvia meets the same two men that Victor met. At the very end, Sylvia smiles hopefully, and we realize that Sylvia is about to go back in time to the moment just before she destroyed her relationship with Victor, and the story is about to twist again, and then the credits roll.

W.D.Reviewed in the United States on September 10, 2015
5.0 out of 5 stars
You can't always get what you want, but ...if you try sometimes, you get what you need!
Verified purchase
I was caught up in this movie early on. It had special meanings to me throughout.

Speaking as one who has had many meaningful relationships that eventually played out only to be questioned as to why at a later time, this movie is spot on!

I have a penchant to remember the good times and pretend the less than good times never happened. But, fortunately when I stop and think why a particular "perfect" relationship didn't pan out, I am able to remember why [without mystical assistance]. Hope it's not too late for me to find my Louise!
3 people found this helpful

James R. LawsReviewed in the United States on May 12, 2015
5.0 out of 5 stars
The 1 for 2nd chances !!
Verified purchase
Love this show !! Whom doesn't have a time in their life when they'd like to have a do-over ?? Some "Classic" screw-up where you were in the wrong, and wonder how/where you would be if you had acted/reacted differently ?? This one address's that plot, and does so in a "Sexy" fashion !! It is the 1st movie I saw Mark Strong in before he became famous in Robin Hood with Crowe, or some of his other recent films. To me he is just as unlikable in this, as in them lol Crooked teeth & all, but Lena Headey, and Penelope Cruz would do any movie justice !! Great literary reference too with Shakespeare, and Quixote.....Well worth watching, as I have many times !!
3 people found this helpful

P-JavieraReviewed in the United States on January 8, 2020
5.0 out of 5 stars
Intense and lighthearted story,.
Verified purchase
I started watching it, but initially found it silly, so I turned it off. After a few days later I decided to watch it again, and truly enjoyed it. I totally loved how the story showed the pain and intense emotions that come from a break-ups, and yet kept the storyline lighthearted with it's various twists, and even when exposing the various character's weaknesses. Glad I decided to watch it after all.

Rich B.Reviewed in the United States on November 20, 2019
3.0 out of 5 stars
I would give it 2.75 stars actually
Verified purchase
I shut it off about halfway through, then a few weeks later I clicked on it and watched the rest of the movie. Then first half didn't keep my attention, but I found the second half was better. Not the best movie, but not the worst. I would give it 2.75 stars to be more accurate about the rating. Plot was weak and kind of a twist on many like it before, acting was not the best, with the exception of a couple the female characters, Penelope Cruz was probably the best thing this movie had going for itself.

JohawnReviewed in the United States on November 17, 2019
5.0 out of 5 stars
Let's call it 4.5 stars
Verified purchase
Loved the premise and this film, although starting slow, grew on me as I watched. Some of the movie was so-so but I spend time thinking about the valuable message re not living in the past and what could have been but embrace and commit to what you have now -- a useful lesson for a romantic with regrets. Overall, it offers perspective.

P.J. D.Reviewed in the United States on July 28, 2019
3.0 out of 5 stars
Streaming Stretched the Screen
Verified purchase
The adjustment of the frame proportions for streaming online are off. Everything is stretched vertically -- just enough to disturb enjoyment of the story. Was able to watch for about five minutes and then fast forward through to catch the main bits and the end. I'll try again some day to watch it whole. From what I can tell it's a good story.

Nicholas K.Reviewed in the United States on June 26, 2019
5.0 out of 5 stars
very dramatic, endearing ,love story light hearted
Verified purchase
shows a different look at break ups & what should , would , or could happen. a good spin on life and what people take for granted Hind sight 20/20 this story makes you think : If you were to do something wrong on purpose , Is it worth losing what you have " great story"
One person found this helpful
See all reviews
Back to top
Get to Know Us
Make Money with Us
Amazon Payment Products
Let Us Help You
EnglishChoose a language for shopping. United StatesChoose a country/region for shopping.
© 1996-2021, Amazon.com, Inc. or its affiliates