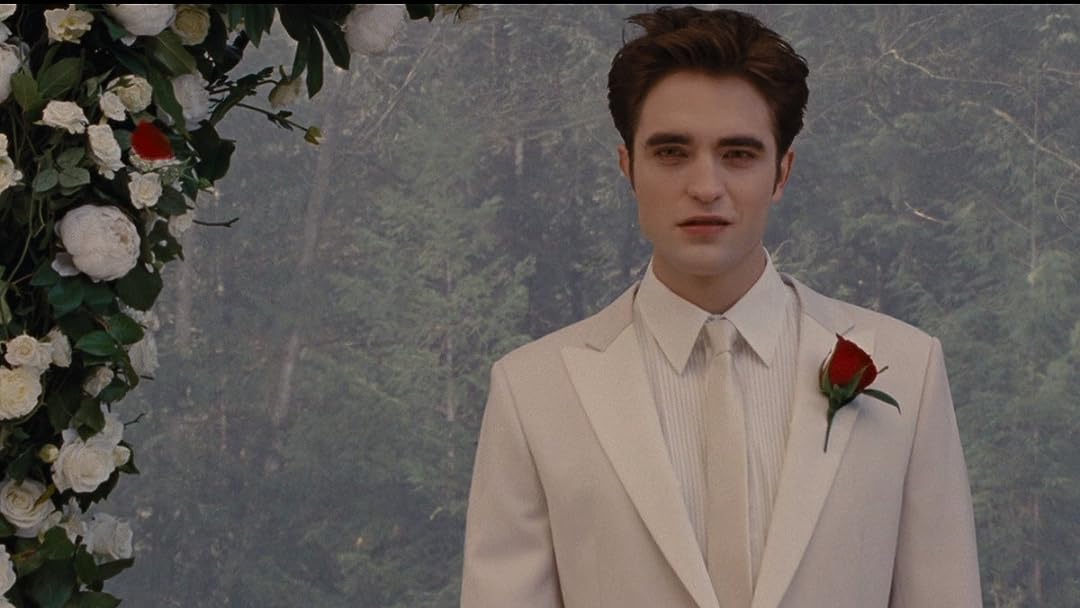 (19,015)
4.91 h 57 min2011X-RayPG-13
In the fourth installment of The Twilight Saga, a marriage, honeymoon and the birth of a child bring unforeseen and shocking developments for Bella (Stewart) and Edward (Pattinson).

Save with with the Twilight movie collection on Prime Video shop now.

Buy all the things!Reviewed in the United States on March 11, 2017
5.0 out of 5 stars
You wouldn't be looking at it if you didn't want it.
Verified purchase
You have to buy the entire saga. It's horrible. You love it. You watch it. You make fun of it. You embarrass yourself. You watch it again. You accept what you've become. Buy it!
204 people found this helpful

Amazon CustomerReviewed in the United States on July 29, 2020
1.0 out of 5 stars
Hilarious Bad Movie - Must See!
Verified purchase
Let me preface this by saying that I give this one star despite thoroughly enjoying the movie. Why? Because it's so horribly bad, I found myself laughing at it for its entirety. This movie could have been marketed as a spoof of this franchise and I would have enjoyed it all the same. But that's probably a compliment considering Twilight is essentially a spoof of coherent gothic fiction.

Also, the greatest part was seeing Bella almost die near the end and Edward frantically biting her everywhere to save her. No scars, no? Doesnt matter. We didn't such satisfaction. But if you ended the saga here and just pretended Bella died, you'd probably think this movie a masterpiece for killing off the teenage female equivalent of a silent, but deadly fart. Her death would have been salvaging some sanity with a spray of air freshener.

This might be a movie about the nightmares of being in abusive families, either foster-care or blood-related, with inappropriate dads and submissive/missing moms.

Amazon CustomerReviewed in the United States on February 21, 2021
1.0 out of 5 stars
Twilight fans, don’t buy!!
Verified purchase
Don’t buy this if you want the flower keepsake that comes with the collector’s set! Someone literally took it out. I’m so upset!! Anyway, I’m returning it so all is well but I was so excited so I’m just going to buy it from somewhere else. Beware y’all.
6 people found this helpful

Erin OliverReviewed in the United States on November 21, 2018
1.0 out of 5 stars
Cash grab movie with way too much gore making it hard to watch. Worst film out of them.
Verified purchase
Breaking dawn I and II look to be such easy money makers that it’s sloppy, despite the fact the director won an Oscar for another film. This movie in particular has far too much gore, making it hard to watch. The lack of continuity is almost hilarious, once again counting on the CGI more than the story and the characters. Have to say Robert Pattinson looks really good in this movie, where it is almost hard to watch Kristen Stewart designed to look like a spokeswoman for eating disorders. Pattinson suddenly has a better build than anyone else in the film, and is tan, with his hair going from red to black. He’s supposed to be 17 forever, unchanging. Unrealistic to expect actors not to grow up, but this was purposeful and painfully obvious.
10 people found this helpful

bbeanReviewed in the United States on February 2, 2020
1.0 out of 5 stars
To save you some pain and a waste of time
Verified purchase
The start of an awful waste of time. Stop before you find yourself getting sucked into possibly the worst vamp werewolf mashup you will regret experiencing. Hindsight will leave you twitching and asking..... why, why did I waste all that time watching this flie infested dung heap of a "saga". *twitches* Certainly nothing good to say here. Vampires shimmering..... what the beeeeeeep
3 people found this helpful

eileenvedadoReviewed in the United States on June 16, 2017
5.0 out of 5 stars
Good for teens, even better for seniors
Verified purchase
Great artist, awesome performance, and wonderful music. I am addicted to the whole story and wishing for more.
I Purchased two sets of dvds. The books are also amazing, but there are some people in it that didn't survive. I hope that Stephanie will get to work on it and transport us back to such fantastic and sublime world again.
12 people found this helpful

EllieReviewed in the United States on February 6, 2018
3.0 out of 5 stars
No slip-cover.
Verified purchase
Twilight is Twilight. You can love it or hate it, but I'm not reviewing the movie, I'm reviewing my purchase. I bought this one and Part 2 and it arrived in great condition and exactly as expected except there was no slip-cover with the case, which is very upsetting for me because that's the whole reason I ordered them on Amazon instead of buying it used. Besides that, it's great.
9 people found this helpful
See all reviews
Back to top
Get to Know Us
Make Money with Us
Amazon Payment Products
Let Us Help You
EnglishChoose a language for shopping. United StatesChoose a country/region for shopping.
© 1996-2021, Amazon.com, Inc. or its affiliates