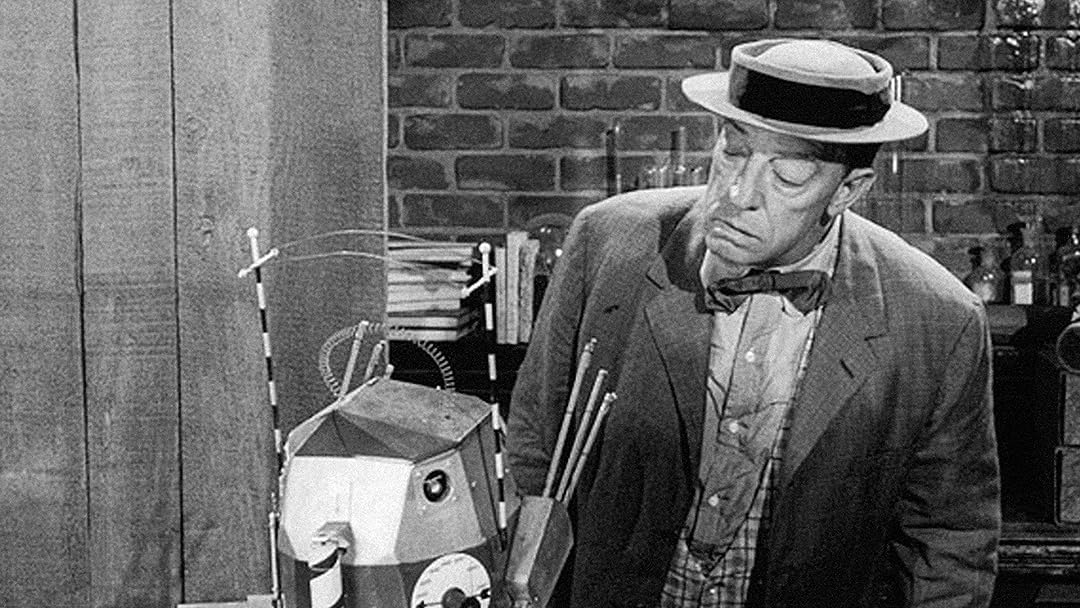 (1,031)
9.01962TV-PG
Rod Serling's spooky series returns for a third round of bizarre tales. The season premiere stars Charles Bronson and Elizabeth Montgomery as survivors of a devastating world war who scramble for scraps of food in a ghost town.

smokinjjReviewed in the United States on December 24, 2016
5.0 out of 5 stars
A trip to The Twlight Zone Never Disappoints and Never Out of Date
Verified purchase
Rod Serling's "Twilight Zone" never gets old. Some stories are fun ("Cavender is Coming" with Carol Burnet) and some have twists you never see coming ("Two" with Robert Redford and Elizabeth Montgomery.) Complete stories shown in black and white in the space of 26 minutes (Seasons 1-3) bring the viewer in touch with love, hate, kindness, bigotry, and downright fun ("A World of His Own" with Keenan Wynn as a screen writer with very special talents). No other show ever managed to pack so much into a half-hour episode week after week and never get old.. Rod Serling died at a very young age due to cancer (his trademark cigarette is gone completely by Season 3) and the world lost a great talent. It boggles the mind to think what he could have achieved had he lived longer.
10 people found this helpful

70's_RuleReviewed in the United States on May 30, 2015
5.0 out of 5 stars
Some of the highest quality television ever made
Verified purchase
I've already gushed about season one, so I'll be more succinct here. Let's put it this way - this is one of the few series that I would actually pay for if it wasn't included in my Prime Membership! S3 does have a few of my all-time favorite episodes, including "The Midnight Sun" (Earth goes out of orbit and moves closer to the Sun), "I Sing The Body Electric" (taken from the Ray Bradbury short story - the title alone is beautiful and a beautifully done story), and of course the iconic "To Serve Man" (It's a cookbook!). Hours and hours of pleasure from this show. I know art is a matter of taste and preference but I find it hard to see how anyone couldn't find something to like in this program.
15 people found this helpful

Walrus999Reviewed in the United States on March 22, 2015
5.0 out of 5 stars
When reality and The Twilight Zone meet ...
Verified purchase
I found the episode very interesting.
Because it was from the early 60's, it had the 'edge' of the memories of WWII still fresh in the scripting.
How ironic that today's Holocaust deniers would prevent such a stark portrayal to be made. ( At its time of production, the executives and producers at CBS, the cast and the initial viewers of this episode had lived-through its reality; the episode must certainly have struck a chord.)

R. P. JonesReviewed in the United States on July 7, 2012
5.0 out of 5 stars
My Very Favorite Twilight Zone
Verified purchase
"Changing of the Guard" is a wonderful story and my very favorite among the many great episodes of the The Twilight Zone. It is sentimental but not in a pretentious sort of way, and has a timeless and universal message for all of us. It is very much a cross between "Goodbye, Mr. Chips" and "It's a Wonderful Life".

Donald Pleasance plays the kindly old Professor Fowler, a teacher of poetry at an all-boys prep school in Vermont. His sudden, forced retirement after more than fifty years at the school leads him to doubt the value of his teachings and, by extension, his life. In despair and feeling that he has been a failure, he visits the school on a winter's night prepared to take his own life. What happens next is one of the most touching and uplifting scenes ever produced by Mr. Serling and company.

If there is a subtext to this episode, it is one that perhaps speaks more urgently today than it would have in 1962, when this episode was filmed; that is the true and essential value of reading literature. In today's vocationally-driven academic world, where the humanities are increasingly de-valued and technology has been placed upon an altar, it's hard to imagine a time when poetry would have been placed alongside mathematics and science as a subject worthy of serious study. Fowler's victory in this story is a victory for everyone who recognizes the essential importance of literature and, in today's world, sees the cultural and sociological consequences of ignoring it.

rareprogenyReviewed in the United States on June 26, 2017
5.0 out of 5 stars
Will the Real Martian Please Stand Up?
Verified purchase
I have been watching the series on Prime from the beginning and Season 3 is amazing. The Passersby was terrific. I think my favorite episodes have been the ones written by Rod Serling. I find his perspective on things like death and the nature of men very moving and emotional. He continually pushed the boundaries of the imagination. I enjoyed when he began appearing briefly in each episode. To me, he is fascinating to watch and I am enthralled when he speaks or comes on screen. A truly gifted and beloved artist. I am 56, so I have been seen The Twilight Zone episodes many times over the years. Watching them in sequence has been a great television experience!
4 people found this helpful

UncleCollectorReviewed in the United States on May 27, 2012
5.0 out of 5 stars
The Blu-Zone
Verified purchase
37 episodes of The Twilight Zone on Blu-ray this is a Great TV show the first episode i have seen was Nightmare at 20,000 feet and i liked the Twilight Zone ever Since then.my top 5 favorit episodes on season 3 is "The Shelter"
"It's a Good Life" "The Hunt" "The Midnight Sun" "Five Characters in Search of an Exit".the picture is good but i wish the screen was full screen and the sound is pretty good.

23.The Last Rites of Jeff Myrtlebark 1/5

37.The Chaning of the Guard 4/5
2 people found this helpful

E. MCDONOUGHReviewed in the United States on December 31, 2013
5.0 out of 5 stars
For Those Who Like Their Twilight Zone Straight Up
Verified purchase
in a rocks glass. No muss. No fuss. No extras. Just pure unadulterated spookiness and unsubtle social commentary without the ice, mixers, special guest appearances, or commercial breaks. Well, maybe a word or two from our sponsor before the chain-smoking Rod Serling tosses out a teaser about next week's episode. Good Lord, he might even mention the name of the writer! That's the way it was in '50s/'60s TV. And Twilight Zone was among the best of the lot. Still is.

Go ahead. Treat yourself to a marathon of little boys wishing their enemies into the corn field, nuclear worldwide war paranoia, troubled men longing for bygone days of idyllic youth, and troubled women longing for -- or desperate to avoid -- perverted beauty. You may never want to get on a plane again. Even the devil himself-- well, I won't spoil it for you.

The episodes appear in their original broadcast order. For my money, the best years were the first season and the fourth (the only hour-long episodes), but feel free to disagree. Yeah, there are a few clunkers in there, but go ahead and buy all five seasons. You know you want to.
2 people found this helpful

P. N. CameronReviewed in the United States on January 28, 2011
5.0 out of 5 stars
Simply Awesome!
Verified purchase
The Twilight Zone is my favorite show, even though I was born several years after the show ended. As a child, my mother used to sit me in front of the television to keep me occupied. (Nintendo/Playstation/XBOX/Computers/Etc.) had not even been thought of yet for the family home. I was hooked immediatly! Ever year I can't wait for 4th of July weekend because the SciFi Network shows a 24 hour a day marathon for the whole weekend. I found myself loosing sleep just to catch the episodes that fascinated me growing up. This past year (2010) SciFi Network decided NOT to show the marathon during the 4th of July weekend and waited until New Years weekend. Since I'm a huge college football fan, I missed over half of the shows due to schedule conflict with the games.
Since I already had Season 1 of The Twilight Zone - Definitive Edition, I decided to order the rest of the series. I was not about to let what happened last year happen again! So now I can have my own marathon anytime I please!
If you are a HUGE fan of old SciFi Thrillers... this series is for you! At the price they are selling for, it is a steal! Without a doubt, Mr. Serling paved the way for several other outstanding programs of the same nature (Kolchak: The Night Stalker/X-Files/Fringe) and of course Mr. Serlings second series (Night Gallery) just to name a few. I have found that if you have a Blu-Ray player with at least a 120hz LED television, the video quality from the DVD editions is outstanding! Please... do not hesitate!
2 people found this helpful
See all reviews
Back to top
Get to Know Us
Make Money with Us
Amazon Payment Products
Let Us Help You
EnglishChoose a language for shopping. United StatesChoose a country/region for shopping.
© 1996-2022, Amazon.com, Inc. or its affiliates