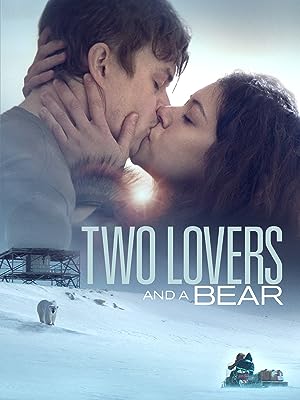 Two Lovers and a Bear

Rex ApplegateReviewed in the United States on February 5, 2017
5.0 out of 5 stars
Stealthy, Fearless Purity
Verified purchase
Two troubled young lovers try to escape their demons in a snowy small town on Baffin Island. Dane DeHaan as Roman and Tatiana Maslany as Lucy work with gifted filmmaker Kim Nguyen to craft a dense, poignant story that is an experience rather than an entertainment. Although the setting and scenery play a major role, the heart of the picture revolves around the struggle and torment of the two lovers.

DeHaan effectively adds passion and unpredictability to a persona used in some of his other films – quiet, moody, slightly befuddled and awkward. Maslany, on the other hand, takes the viewer on a strange journey that leaves one processing the performance long after the ending credits. Basically, there is no acting to be seen as Lucy is played with a stealthy, fearless purity that at times can be uncomfortable to watch. In fact, in two scenes it seems Maslany is just being her actual, real self, an achievement only made possible by being Lucy, not playing her. The end result is a character so real it hurts. Maslany worked similar magic as Claire in “Picture Day,” but this time our endearment leads to heartache instead of epiphany.

Amazon CustomerReviewed in the United States on March 26, 2017
4.0 out of 5 stars
Even the g_ds have flaws
Verified purchase
This is not the easiest movie to review and it reminds me strongly of two equally bleak but more polished "people with deeply troubled lives go on a trip in harsh surroundings" movies :[[ASIN:B00ETI75B6 The Sheltering Sky]] and [[ASIN:B01148DX50 Red Knot]] and like both of them it cries out to be seen on the biggest screen possible. The sheer scale of Nicolas Bolduc's wide shots of the Nunavut wilderness demand they be seen in a theater to fully take in what he's showing you (I had the same feeling about Vittorio Storaro's cinematography in The Sheltering Sky). The movie is worth seeing for cinematography alone but will lose something essential on too a smaller screen. But the real star of the movie is Tatiana Maslany who fearlessly throws herself body, mind, and soul into this troubled character from complete meltdowns to passionate sex: a tour de force of acting skills. She is one of the most underrated actresses of her generation.
As the whimsical spirit bear says "even the g_ds have flaws" and this DVD does, there are no extras on the extras menu beyond the theatrical trailer that cost them nothing. This movie deserves a director's commentary from Kim Nguyen (with interjections from Tatiana) and it cries out for the bear to get his own piece - shame on them for selling their fans short here.
2 people found this helpful

Cromwell133Reviewed in the United States on April 12, 2019
5.0 out of 5 stars
Tatiana Maslany brings this movie to life!!
Verified purchase
Another outstanding performance by Emmy winner Tatiana Maslany. In this movie, shot in and around Iqaluit and Apex, Nunavut, Canada - one of the northernmost towns in Canada - we get to see that spectacular terrain in the winter season. The story follows Lucy (Maslany) and her boyfriend Roman (Dane Dehaan) as they try to deal with and get past troubling aspects of their lives. The onscreen chemistry and acting of these two is just as exceptional as the Arctic scenery.
One person found this helpful

Kiki GarciaReviewed in the United States on January 8, 2021
2.0 out of 5 stars
So sad two stars cuz it’s Tatiana ❣️
Verified purchase
I absolutely love Tatiana she’s my favorite actress cuz she looks nearly identical to my daughter And I think because of that it disturbed me badly I won’t ever watch it again cuz I couldn’t stop crying she looks so much like my daughter and I would be ultra devastated if this happened to her

BrookeReviewed in the United States on April 3, 2017
5.0 out of 5 stars
Five Stars
Verified purchase
This movie had my attention from the beginning and seemed to pick up speed the further along it progressed. Dane DeHaan and Tatiana Maslany both did a superb job, capturing complex emotions that really drew me into their characters. It was deep, emotional, happy, sad, and even mildly funny a few times. It was a roller coaster of a movie, and I mean that in the best way possible. I highly recommend it.
2 people found this helpful

AGXV PowwerfactorReviewed in the United States on April 13, 2017
5.0 out of 5 stars
I came for Tat Maslany and stayed for everyone else!
Verified purchase
Well acted by everyone! Portrays desolation, both in emotion and physical landscapes.
One person found this helpful

crazyhorse89Reviewed in the United States on April 15, 2017
5.0 out of 5 stars
Five Stars
Verified purchase
A True Love Story
One person found this helpful

Amazon CustomerReviewed in the United States on February 11, 2017
5.0 out of 5 stars
Five Stars
Verified purchase
loved this film. great getaway from Hollywood scripts too. xx
3 people found this helpful
See all reviews
Back to top
Get to Know Us
Make Money with Us
Amazon Payment Products
Let Us Help You
EnglishChoose a language for shopping. United StatesChoose a country/region for shopping.
© 1996-2022, Amazon.com, Inc. or its affiliates