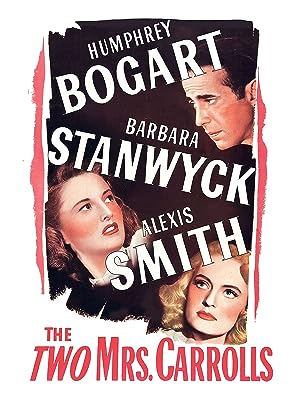 (568)
1 h 38 min1947NR
Humphrey Bogart portrays Geoffrey, who’s making a habit of poisoning one wife and marrying another when the former no longer inspires his canvases.

Lambie's MOMReviewed in the United States on June 10, 2020
5.0 out of 5 stars
Barbara stanwyck Helpless and Humphrey - Psychopaathic
Verified purchase
WOW!! This is a bone chilling old movie. Humphrey, could really dish up PSYchopathic! Incredible acting for him. He seems so gentle, sweet and reserved in the beginning, but he becomes more and more controlling as time goes on. HE is a SERIAL KILLER! He likes blondes, too. HIs young daughter, "Bea", also a blonde. (She also starred in several old Sherlock Holmes movies) cute child! HUmphrey, is a tortured painter or is he just an ordinary old Serial Killer? Great set design. Edith Head - gowns!! Woo Hoo! Both actors are of course, wonderful. Movie is very, very unnerving, and in Black & white, its really eerie. Lots of heavy rain, wind, beautiful costumes, lots of plaids, just a great old film. Worth watching!
6 people found this helpful

Lynne CarterReviewed in the United States on August 30, 2020
3.0 out of 5 stars
Worth watching once, but no more than that!
Verified purchase
This movie should’ve been titled, “The Two Humphrey Bogart’s”! HD is one of my all time favorite actors. Having seen all his major films, I can honestly say that this one does not measure up to Bogie’s stellar level of talent (hence the comment about the title). I found this film to be a disappointing viewing experience right from the beginning. Bogie’s performance was so unfamiliar that I kept wondering, “ Who is this guy?” If not for Barbara Stanwyck’s portrayal of one of the Mrs. Carroll’s, I can honestly say I would have stopped the movie halfway through for lack of interest. Having said all that, I still consider any Humphrey Bogart film worth watching at least once. Sadly, that’s exactly how many times I will see this one.
One person found this helpful

PintoriniReviewed in the United States on August 19, 2005
4.0 out of 5 stars
Lackluster Women's Noir, but the Stars Make it Worthwhile
Verified purchase
Humphrey Bogart and Barbara Stanwyck play interestingly against type as psychologically troubled artist Gerry Carroll and his fragile second wife, Sally. The problem isn't the acting or (in my opinion) the casting, but the clunky script. In the opening scene, Sally accidentally learns that new flame Gerry is married when (*clears throat for comic effect*) a letter to "Mrs. Carroll" falls out of his pocket. Swearing to never see Gerry again, Sally runs off into the rain, only to turn up married to Gerry three scenes later, after wife number one is dead. From there, the turns of plot become ever more convenient and clichéd, and yet somehow less logical at the same time. The script both swills in extraneous information and leaves too much unexplained, and the film overall is like a clothesline, with the plot points hung on awkwardly at predictable intervals.

But if there were ever two stars that could save bad material, it was Bogart and Stanwyck. Bogie made the choppy, incoherent character Gerry come out to more than the sum of his parts. And Stany, rest her soul, did her best in everything, from Preston Sturges literary tour de force *The Lady Eve* to the string of nickel westerns she did in the '50s. This pairing deserved a better vehicle, but it's fun to watch even so.

J.T.M.Reviewed in the United States on November 11, 2019
1.0 out of 5 stars
Possibly the worst film Bogart ever made
Verified purchase
For all the top rated talent creating this film, —stars, studio, director, etc., the writing is totally phony, and the performances are dreadful. You can practically hear the director yell "Cut" after ever scene. Netflix doesn't even stock this one. I had to buy it to see it. A total waste of money.
One person found this helpful

Anastasia McPhersonReviewed in the United States on January 29, 2014
4.0 out of 5 stars
Great A- to B+ Film Representative of the Era's Noir
Verified purchase
My son and I were on a Film Noir Binge over the holiday and this was one of the offerings we perused. The two Mrs. Carrolls is solid and entertaining - not a classic, but a lot of watchable fun nevertheless. It is hard to say a bad word about a movie that features not only Humphrey Bogart and Barbara Stanwyck, but several great American and British character actors of the time.

Bogart is an artist who marries his muses. When we meet him, he is on an adulterous vacation with Stanwyck, the problem being that she doesn't know she is the other woman. She leaves him in a fit of tears and in another world, that would have been the end of it. But Carroll needs the inspiration that Stanwyck provides for his painting. His mysteriously sickly wife isn't quite doing the job - but she has one more painting in her, the beautiful and disturbing Angel of Death that is featured heavily in the film.

After the death of the first Mrs. Carroll, Bogart reunites with Stanwyck and we next see them married and living the life of landed gentry in an English manor house. Paintings of Stanwyck have joined the Angel of Death and they are to all appearances deliriously happy. But Carroll isn't painting as well as he used to and isn't selling what he did paint.

What happens next is predictable and that is my main criticism of the movie. Too much is telegraphed to the viewer far too early. Nor is the red herring even remotely believable. The prodigious talents of Bogart and Stanwyck and the rest of the cast have to carry a script that is weak in terms of mystery and suspense. For a movie that is a mystery and a thriller in the noir tradition, this is a genuine weakness.

That said, this is a solid film and worth watching, especially for fans of the silver screen and the stars and character actors involved. Final grade, solid but not spectacular, despite all of the star power involved.

Helen E. T. SmithReviewed in the United States on August 19, 2021
5.0 out of 5 stars
Really Good!!!
Verified purchase
There is nothing like the classic movies. Humphrey Bogart and Barbara Stanwyck were in rare form with their performances. Glad I was a le to get this movie.

MM-SReviewed in the United States on October 13, 2020
5.0 out of 5 stars
Suspense with Humphrey Bogart & a great cast
Verified purchase
This is one of y favorite movies. It has mystery suspense and is written well with an amazing cast. Barbara Stanwyck is younger and more at ease with her actions than with television I can watch it over and over and pick up things I missed.

G. Alan HicksReviewed in the United States on March 13, 2012
4.0 out of 5 stars
Great Warner Brothers Feature With Formable Cast...
Verified purchase
While some reviewers, even those of the professional ilk, consider this film a poor attempt at cinematic cleverness and dull-witted -- lacking originality -- I believe this film deserves some attention because of the excellent performances turned in by Stanwyck, Bogart and Smith.

The source material is not from restored elements (even though Warner Archives says it is REMASTERED), so be full aware that this is not pristine in its presentation. Still, despite the flecks and scratches, it's well worth the price of purchase.
One person found this helpful
See all reviews
Back to top
Get to Know Us
Make Money with Us
Amazon Payment Products
Let Us Help You
EnglishChoose a language for shopping. United StatesChoose a country/region for shopping.
© 1996-2022, Amazon.com, Inc. or its affiliates