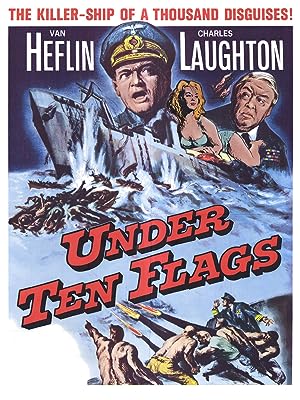 Alfred R. GrayReviewed in the United States on August 29, 2016
3.0 out of 5 stars
like Hitler with his dog and all Aryan children
Verified purchase
UNDER TEN FLAGS
I would go to the ends of the earth to see a movie Charles Laughton is in. I would go to the ends of the earth to see a movie starring Van Heflin, the latter a slightly less skilled actor. Both capture and lock in my attention when they are on the screen. Now I had a film with both actors together. What more could I ask?
UNDER TEN FLAGS is a true story about the tracking and destroying of a Nazi freighter that conceals itself as a peaceful vessel and then when it gets close enough, removes the disguise and fires on and sinks the targeted boat. In this case, though, the captain of the rogue ship, Van Heflin, orders that the victimized ship be sunk but that no one on board should die, everyone being taken aboard his ship as prisoner. This is hardly what Hitler had in mind but then this captain is not a Nazi, just a practioner, clinging to his humanity while doing his job.). He even cares for a dog on board, like Hitler with his dog and all Aryan children, but as affirmation of his humanity not as oxymoron. The Nazi helping him is his aide, played by John Erickson, an actor who at one time was considered a new Brando.
Charles Laughton, is the stern British naval leader trying to catch Heflin, maintaining a stern professional efficiency in the atmosphere he must command—giant map and all. Cecil Parker is the boss over him. Alec Nicol (another strong controlled performance) is the expert Texan spy who pulls off an almost miraculous theft of the critical German naval code, a robbery which leads to the end of the reign of Heflin’s freighter.
Though this was war, war seemed to be happening someplace else far away. To me, the high point of drama of the film was the magnificent speech given by Liam Redmond as the dying captain of the victimized British ship. Though there is no scene in the film when Laughton and Heflin meet face to face, there was a clear sense of a tussle between them, as if they were playing internet chess.
I have to give the film to Heflin’s more controlled performance. Laughton was too Laughtony, with his tics, changes in direction, double takes. I kept saying to myself, “Where is the director? Tone him down!” Still, I’ll take thisover no Laughton at all. Heflin’s character wound up as NATO commander after the war. I assume his character and Laughton’s met for tea at some time. I wonder what was said.

MollyReviewed in the United States on July 8, 2019
4.0 out of 5 stars
Nazi Skipper hides his ship in plain sight~ 4 STARS~
Verified purchase
a Nazi Ship uses disguise to hunt down enemy ships~

Van Heflin is a Nazi Skipper of The Atlantis. In spite of being a Nazi who has a conscience but does his duty. His ship assumes the identity of neutral ships to get close enough to British ships to torpedo them. Complete with fake paint jobs, sailors in disguise to complete the ruse to make their attacks. Charles Laughton is the hefty loud man in charge of the brits who want the ship no matter what. The Nazis have a clever communication system complete with a FLOWER Chart Grid so they can meet for fuel and cargo. This makes it fun from the beginning. As they sink ship after ship Heflin shows humanity by rescuing as many people as possible including some jews. The Brits finally have a clever way to obtain a copy of the Flower Grid Chart so they can locate the Atlantis. Laughton is way too HAMMY and overbearing at times. And the Hunt for the Atlantis keeps us glued to the end. 4 STARS~
One person found this helpful

L. B. DornyReviewed in the United States on December 10, 2019
4.0 out of 5 stars
Schiff 16 - Handelstörkreuzer «Atlantis»
Verified purchase
This a synopsis of the real-life voyage of Schiff 16 - Handelstörkreuzer «Atlantis». The Kriegsmarine armed merchant cruiser of 1940-41, one of the most successful raiders of a long history of such among many nations, including large numbers of American privateers raiding British shipping in wars and generations past. She flew Soviet, Japanese, Norwegian, Dutch, Greek, and probably other flags as her various disguises, and was very effective. There is, of course, a great deal more to the story than the film could portray, but Kapitän Bernard Rogge was a humane leader, experienced merchant captain himself, and a very skillful and cunning warrior. He served later in the new Federal German Navy, and won the respect of fellow British and American naval officers who knew and served with him in NATO commands. The role of cryptology and intelligence as depicted is in part bogus, but in fact both the German and the British Navies were reading each others codes to varying degrees. Berlin ordered «Atlantis» to refuel U 126 at a position in the South Atlantic and the Royal Navy sent heavy cruiser HMS DEVONSHIRE to the same position and intercepted and sank the raider disguised as SS Polyphemus. U-boats and German Navy supply ship «Python» rescued survivors, but «Python» was soon herself intercepted and sunk. The crews reached occupied France and survived. Great story in fact; excellent movie adaptation.
2 people found this helpful

Laura Ann ScaifeReviewed in the United States on April 4, 2015
5.0 out of 5 stars
The Legend Of Atlantis
Verified purchase
I haven't seen this film since my Mother took me to see it at the old Dominion theater in 1960, but I have remembered quite a bit of it.It was a good film in 1960, and it still is today. The true story of the KM Atlantis' 665 day cruise is remarkable no matter which side of the war one was on, and Captain Rogge seems to be universally respected because of his humane treatment of prisoners and the almost chivalrous way he conducted his war. Both these points are nicely brought out in the film. As for the DVD itself, it isn't letterboxed and the picture is a little washed out, but this is the only way the film can be owned and it IS perfectly watchable. Some reviews have complained about the language options, in particular not having an English language track. The disc plays perfectly in my Samsung multi-region player, and if you select the English soundtrack you get the soundtrack I heard back in 1960 (Charles Laughton is distinctive anywhere!). For a look at a very interesting piece of history, give this a try. It isn't perfect, but in my opinion it's perfectly acceptable. And don't forget, if you do want to order the film, it is a region 2 disc.
2 people found this helpful

robert mcmurryReviewed in the United States on July 6, 2019
3.0 out of 5 stars
Odd take on a true WW2 event.
Verified purchase
Based on true events, Van Heflin plays a German Warship commander. His ship is a freighter that can changed its looks, nationality, and hide its guns until a Allied freighter is sighted. He believes in fair play in war. And of course, one of his officers is a radical Nazi. Laughton plays the head of the British navy in London trying to track this ship. They do not appear in the film together. A film of cat and mouse played thousands of miles from each other. Of interest only to those who like these actors.

ToddReviewed in the United States on March 5, 2019
3.0 out of 5 stars
Good old movie.
Verified purchase
It is one of the few movies that tell the story from the Germans point of view. The raiding ships that Germany sent out was something hard to find info on. They made the Germans a little too nobel, even though these sailors had almost nothing to do with the Holocaust.

Don't know how many lives they spared but we also so nothing of them taking supplies for the German war effort, which was job one. Sometimes they captured ships and took them to German ports. The Atlantis existed and did a Cruse longer than 600 days as in the movie.

Alan K. SumrallReviewed in the United States on August 22, 2013
4.0 out of 5 stars
Four for subject matter and Truth
Verified purchase
Although I have never been a Van Heflin fan (although he was perfect for his role in Shane), he works in his historical role. It is not a Nazi apology movie, the fact is that the captain of the raider Atlantis was cut from a different cloth in that he pushed the envelope against his Nazi bosses to fight in a manner of a gentlemen. Perhaps he was an outdated warrior, but he is one of the few German officers who actually earned their place in history as a gallant, honorable, and quite effective foe who earned the respect of the Royal Navy. The depiction of the Atlantis and her rather remarkable commerce raider cruise is far more accurate than most films. The only black mark of the film is a quite unnecessary T & A scenes when a hot blond of the late 1950's who would look more in place in a 60's beach movie is somehow showing her stuff (as much as she is allowed) in a 1941 time period. It's a mild distraction to the story but not too bad.
8 people found this helpful

RescuepetsruleReviewed in the United States on May 19, 2021
4.0 out of 5 stars
great story-for saving Schnapps-SALUTE!
Verified purchase
Aside from the blonde fleshpot, it's a good movie. Sadly, Hitler ordered that no survivors were rescued after this, so they all drowned. Even the ones they picked up were often killed by the British- being picked up was not a rescue many times, as they were sunk anyway.
See all reviews
Back to top
Get to Know Us
Make Money with Us
Amazon Payment Products
Let Us Help You
EnglishChoose a language for shopping. United StatesChoose a country/region for shopping.
© 1996-2021, Amazon.com, Inc. or its affiliates