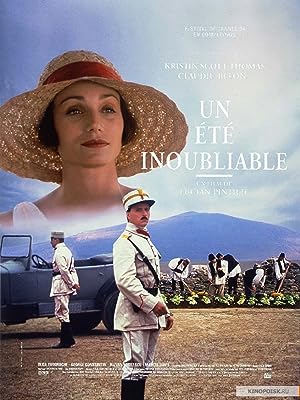 (9)
7.21 h 22 min1994R
A cosmopolitan family is reassigned to an outpost on the frontier between Bulgaria and Romania.

dkrdkrReviewed in the United States on November 2, 2010
3.0 out of 5 stars
excellent movie, poor dvd
Verified purchase
there's not much left to said about the movie itself, as it's usually praised by everyone who's seen it. i'd rate it a five if it wasn't for the dvd itself, which doesn't contain any bonus, and, worse, does not allow you to change the language: you'll be unable to see the movie in romanian - which imho is important for any of pintilie's films - here it is only in french (without subtitles). if you can, get the french version of this dvd (this one's the canadian one), which contains original language, english subtitles and some very interesting remarks by domnul pintilie himself.
2 people found this helpful

diodemanReviewed in the United States on December 27, 2018
1.0 out of 5 stars
Sub titles
Verified purchase
I cant review film because there are no subtitles. In description of film it says subtitles in English. No there are not. Why is it advertised with subtitles?
One person found this helpful

Alex UdvaryReviewed in the United States on July 18, 2006
3.0 out of 5 stars
"Unforgettable" Movie
"An Unforgettable Summer" takes place in 1925 in Eastern Romanian. The land use to belong to the Bulgarians. Now it doesn't. And in the course of the future it will switch hands again and again.

Capt. Petre Dumitriu (Claudiu Bleont) is sent to a dangerous Bulgarian/Romanian border after his wife, Marie-Therese Von Debretsy (Kristin Scott Thomas) does not accept the advances for Petre's commanding officier.

The couple, along with their children, try to adapt to this new setting. Petre repeatedly tells his wife, they will not be staying there long. But it's not a safe place to be. Danger lurks around every corner.

Soon, the unavoidable happens. Eight Romanian soldiers are killed. Several Bulgarians are captured and Petre is told he is going to have to give the order to have the men executed. This though comes as a shock to the couple. Especially after Marie spends time with the men and a relationship forms between them.

The film was directed by Lucian Pintilie and based on the novel La Salade written by Petru Dumitriu. Now the movie never states whether or not this was based on a true story, but, I have a hunch it doesn't matter. This may not have been based on a particular story, but, events such as these must have taken place at one time or another.

I'm someone who firmly believes movies can exist as insights into society. When we watch movies from past decades, they tell us something about the world. Movies are a reflection of the times. They either endorse social morals and values or attempt to challenge them. Movies are rarely made that do not serve a purpose. Nearly all movies are about something. They exist to inform us.

Keeping this in mind then, lets try and figure out what "An Unforgettable Summer" is really trying to tell us. Lets think back to the early '90s. What was going on in eastern Europe at that time? The "ethnic cleansing" and decline of the former Yugoslavia! "An Unforgettable Summer" is using another historical time in history, when people were merely hated for being different, and compare it to a more contemporary event.

One of the underlying themes of the film, is hatred for "the other". Many of the Romanians hate Petre's wife because she is half Hungarian. The Romanian army of course hates the Bulgarians. People simply hate one another because they are different.

Pintilie's films usually have a political bent. Much of his work involves Romania's rule under Communism. "Terminus paradis" is one film to check out. Here with "An Unforgettable Summer" Pintilie is making a strong social commentary. Now if only more people would watch the film and take to heart it's message you might begin to realize the power of movies.

Bottom-line: Lucian Pintilie's film makes a powerful social commentary dealing with a regrettable time in recent history. The performances are strong and convincing and carry a lot of emotional weight.

Manuel Elias Nunez FrecheroReviewed in the United States on July 20, 2009
5.0 out of 5 stars
Powerful historical film from Romania..
An unforgettable summer (Un été inoubliable) is a french-Romanian film set in what was then part of Romania (present day Bulgaria) in the 1920's. The film is loosely based on a novel by Romanian author Petru Dumitriu.

The film stars english film star Kristin Scott Thomas in a powerful role as the Hungarian born aristocrat Von Debretsy who is married to Captain Petre of the romanian army. The film developes in the Souther Dobruja (present day Bulgaria) where the captain is posted after requesting a transfer to get away from the arrogant General Ipsilanti who is trying to win over his own wife in not so subtle terms.

Below is a list of the different factors that I considered in given this rating.

Historical Context: The Southern Dobruja region in the 1920's. At a time an area of land recently occupied by Romania after one of the several wars that had taken place in the region. Captain Dumitriu is posted there with his family in a very difficult assignment where he has to replace a fellow officer who was killed by "bandit" and had his lips "cut off" as General Ipsilanti grimly tells to a fellow officer over the phone after arranging for Dumitrius posting.

Plot: The movie then develops along a few paths always with the central one being the impact of the environment and their new reality on Marie-Thérèse and Petre.. At the beginning of their stay in the new post we see that even tough is a lonely place in a dusty part of the Balkans they seem to thrive as a family with their love and affection with each other, punctuated by their family dinners, the Mozart concerts in the lounge and them contemplating a non-descript hill in the back of the post wich Marie-Thérèse calls Mount Fuji... affectionately and as a show that they can make it in that god forsaken part of the world.

All this eventually turns into a situation of tension, pain and desperation as a bandit attack on one of the army outposts results in the death of eight soldiers, that required Captain Dumitriu to obey orders of "reprisals" among the local bulgarians.

The local bulgarians are then rounded up and taken to the post, where they are put to work in the garden that produces an excellent crop of lettuces that make the excellent salad that Marie-Thérèse makes and serves to Captain Dumitriu and his officer colleagues.

She befriends several of the gardeners and makes their presence on the camp more bearable by giving them food and paying them for their labor.

Finally, the high command on Bucharest decides that the Bulgarians are to be executed in reprisal for the Bandits (who are really Macedonias who speak Romanian) killing of the soldiers.

Captain Dumitriu refuses to carry over the order, and asks for writen notification, therefore putting his career in jeopardy.

The movie then evolves on the terrible toll that this order has on the Captain and his wife, showing how sometimes one is powerless to act in the progression of events to their dreadful end.
4 people found this helpful

Kristopher KincaidReviewed in the United States on October 23, 2001
5.0 out of 5 stars
an odd place to find kristin scott thomas
Romanian director Lucian Pintilie has been making great films since the 1960s but due to the obscurity of his nation in the eyes of the West he has unfortunately remained pretty much unknown outside his own country. This changed somewhat with the acclaim of his amazing dark satire from 1992 "The Oak," a French-Romanian co-production, and his "An Unforgettable Summer" - once again a Romanian production largely bankrolled by foreign money and starring popular English actress Kristin Scott Thomas. "An Unforgettable Summer" is, like the Oak, an ironic look at political terror. Purposely less outlandish and surreal than "The Oak," the film is nevertheless quite an accomplishment and proves its director to be one of the great living filmmakers, still a largely unheralded great and an important chronicler of his nation's troubled history. The VHS tape of this film is unfortunately (along with "The Oak") still terribly overpriced.
19 people found this helpful
See all reviews
Back to top
Get to Know Us
Make Money with Us
Amazon Payment Products
Let Us Help You
EnglishChoose a language for shopping. United StatesChoose a country/region for shopping.
© 1996-2022, Amazon.com, Inc. or its affiliates