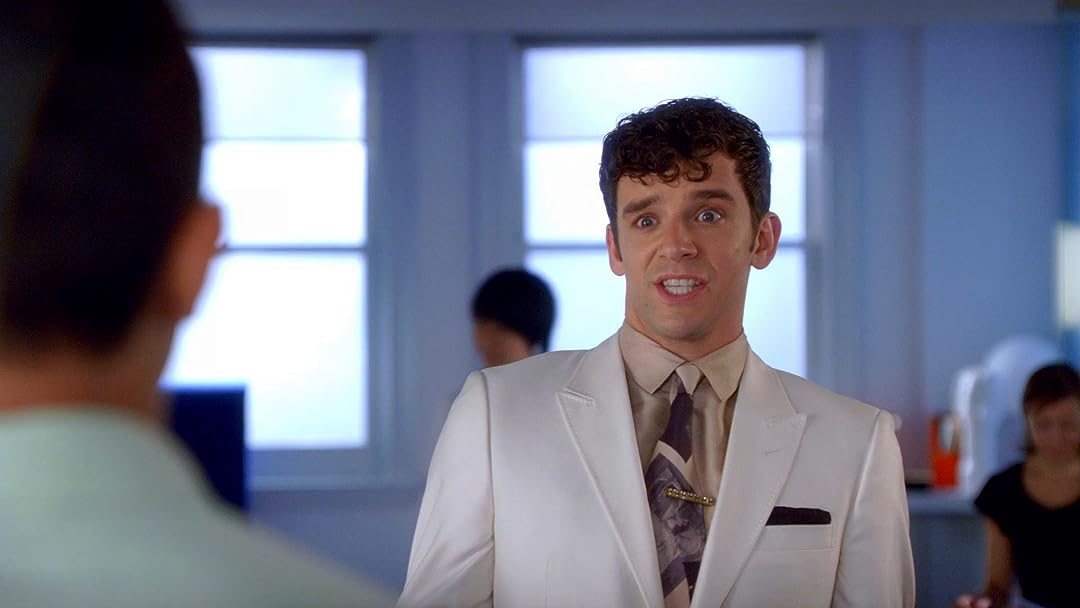 (501)
6.62010X-RayTV-PG
The fashion world's beloved and terminally style-challenged not "it" girl is back as a junior editor! Daniel is adrift without Betty as he grapples with the death of his wife, and Marc St. James, Wilhelmina's assistant, is out to undermine her at every turn. Betty's ex-boyfriend, Matt, is now her boss, and he can't seem to put the past behind him.

B. P. PetersenReviewed in the United States on February 25, 2013
5.0 out of 5 stars
One Cannot help But Love Her
Verified purchase
The last season makes it inevitably clear throughout its course that this truly wonderful sitcom is nearing its end, and very dignified so, compared to other shows, which were cancelled much more abruptly and lacking closure.

Betty has evolved continuously, and does so by finally addressing her previously-mocked appearance, such as choosing a less-shrill choice of professional wardrobe, a modern pair of frameless glasses, a chic hairstyle, and ultimate braces removal. She is now on-par with much more powerful individuals at MODE Magazine while simultaneously remaining her charming, humble self. The Suarez Family has also matured and developed: Justin experiences his coming out, Hilda stops reeling over Justin's father, Santos', death, and she re-discovers love. After intial hesitation she is marrying her former high school bad-boy crush Bobby, and they plan to move to Manhattan. Father Ignacio admits he will be missing his daughters but knows he will enjoy his new-found peace and space.
Meade Empire mother matriarch Claire Meade and career-hungry rival supermodel Wilhelmina Slater make amends. Alpha-male and now-widower Daniel opts to step down as editor-in-chief, conceding the post to once-manipulative Wilhelmina whom he now admits truly earned the position whereas it was only handed to him by his now-deceased father and company tycoon Bradford Meade. Wilhelmina's flambouyant assistant Mark gets promoted to creative director capacity while Amanda finally discovers who her actual father is, while, simultaneously, assuming the opening as a MODE stylist.
All interpersonal turbulences are finally laid to rest. But it hurts to see Betty accept an employment offer in London, UK, bidding her good-byes to both family and MODE. Like the other, three seasons this final one is both heartwarming and hilarious, a bitter-sweet finale knowing that another, outstanding sitcom has been laid to rest. At least gently so.

XISDEADReviewed in the United States on January 15, 2013
5.0 out of 5 stars
BETTY!!!!!!!!
Verified purchase
And all good things must come to an end. The fourth and final season of Ugly Betty tracks Betty and her world and tries it's best to find a reasonable send off point (NOT CLOSURE) for all characters involved. BRAVO to the main actors (especially Mark Indelicato, Becki Newton, Michael Urie, Vanessa Williams and the super awesome America Ferrera) for giving us some great character acting and real good and sad times. I will miss this show. here's the rundown of the fourth and final season.

essentially: (BEWARE OF POSSIBLE SPOILERS)
-Hilda finds happiness, as the show decided, where and with whom she fits with. (closure)
-Ignacio comes to terms with the idea of his girls growing up and finds some sort of love, (we don't get much)
-Amanda finds what she's been looking for, or rather it finds her, (we don't get much)
-Marc becomes what he wants to be and finally get's credit from everybody who never noticed (closure)
-Justin has probably the BIGGEST (duhh) revelation, but it could have sent out more of an impact for the viewers or fans to see him understand himself and be a message for tolerance and acceptance. (agonizing closure but a great story within a story)
-Wilhelmina sort of gets what she wants and, SURPRISE, it doesn't come by her schemes or plans after all (closure)
-Claire finally finds peace with her family (closure)
-Daniel finally realizes what's important and who really matters and takes a huge leap (agonizing closure)
-Betty finally takes a next step and a new chapter seems to start and although her love life seems in shambles as always a new possibility presents itself in the end (agonizing closure)

Unanswered questions and what we don't get to see or will ever know is:
-What about Christina's husband Stewart?
-How do Wilhelmina and Claire find a medium given their final circumstances?
-Does Ignacio ever get to be with his long distance love?
-What happens to Conner?
-Does Tyler ever go about tackling his father?
-Does Wilhelmina ever find peace with her family (daughter, father, sister)?
-Does Alexis and Daniel Jr ever become a family and or return?

And of course there is that ending.... I won't spoil that one, BUT OHHHHHHH, to not know what happens is both elegant, fair but a painstaking end to a knockout series. BRAVO again.

Debra FriscoReviewed in the United States on April 1, 2013
5.0 out of 5 stars
Wonderful! Well Finished, and I will Miss It!
Verified purchase
Ugly Betty is in my top five of all-time best comedy shows. America Ferrera is amazing, and the supporting cast is brilliant and fantastic. Entertaining, very very funny, and great fashion... What more could one want? If you're looking for hours of amazing comedy, there are four seasons of ecstatic comedy in store for you... If you haven't seen Ugly Betty, start with season 1, you won't want to miss a blessed second of the great jokes, comedic artistry, or compelling story. The ending, though sad to reach, since I could have watched Ugly Betty for many more seasons, was superbly fitting, and showed our Betty had grown-up to reach her great potential. Such a joyride...
One person found this helpful

HeatherReviewed in the United States on September 2, 2014
5.0 out of 5 stars
Love this show
Verified purchase
Love this show. Never finished watching the entire series due to military deployment interupting the show. Then never picked it back up. While on another deployment I picked up the entire series and fell in love all over again. Now I have my entire team HOOKED on this show. They eagerly wait each episode and try to predict what happens. They love getting caught up in all the suspense/drama of the show.

Highly recommend picking up the whole series. Fun for all!
One person found this helpful

J. BizzleReviewed in the United States on November 1, 2011
5.0 out of 5 stars
Best of Betty
Verified purchase
I own all of the seasons and I am an Ugly Betty Fanatic. Season four was a must-have. Then I purchased them one by one resuming with season one. Season four shows the amazing transformation and accomplished Betty. The Betty that is professional and as Willamina says 'You know Betty, you dont always get it wrong' when she refers to the growth of Bettys fashion sense and that though her initial thought of MODE magazine was not of high importance, Mode slowly becomes one with Betty. The one-liners are still classics, the transformations are comming to a close sadly and Mode is at the end of its Era. Sad but definetly satisfying.

SalemClipperReviewed in the United States on September 30, 2012
5.0 out of 5 stars
Fitting end to a superbly edgy series
Verified purchase
The totally fabulous last season on this DVD set builds toward a credible [and deserving] end for the title character. Understandably and thankfully, the writers throttled back on the usual off-the-wall twists and turns that often stretched and tested credibility. Most of the series' dangling threads were aptly addressed and the series brought to a fitting and upbeat/satisfying close. The out-takes, commentary, and special features added even more value to this boxed mutli-DVD set. Betty now can rule in perpetuity.

iGirlReviewed in the United States on August 5, 2011
5.0 out of 5 stars
A swan by any other name...
Verified purchase
Though I recently added the Season 4 DVD to complete my Ugly Betty collection, I never saw the first season of Ugly Betty on TV, so I've not yet seen how the duckling found herself in the on-the-surface shallow world of high fashion, working as an assistant at Mode magazine. I also have no interest in tedious, maudlin and repetitive traditional soaps, but this series had me hooked from the start of season 2 because it's anything but traditional. Really, it seemed to come into the world as a spoof, with over-the-top caricatures in expensive suits, mortgage-your-house shoes and champagne for breakfast - all just a cover for the gold hearts that beat truly behind those designer labels.

Betty, who the shallow fashionistas label Ugly from the beginning due to her lack of sophistication and down-to-earth goodness [Wilhelmina's botox-laced face would attempt a sneer at that word], has the brightest heart of all. Helped by the support of a caring family which has instilled in her the values of compassion and open acceptance of those who are different, her practical persistence in the face of constant rejection sees all around her eventually succumb to their better nature. By the end of this final season, Betty is seen as beautiful and, most significantly, valued by everyone.

Don't think, though, that this show is syrupy sweet [remember my dislike of soaps!] - it is only sometimes serious and sad, but mostly it is fun, exaggerated, dastardly and clever - filled with meaningful glances, expressive eyebrow raises and catwalk-worthy struts through the fashion magazine's pristine offices.

Betty's journey from ugly duckling to beautiful swan is one to enjoy, and the final season presented us with a perfectly wrapped ending.
3 people found this helpful

BMBReviewed in the United States on October 20, 2015
5.0 out of 5 stars
I love have the entire series to re-watch whenever I want to
Verified purchase
One of my favorite TV series. I love that I can watch my favorite episodes or re-watch the entire series at my whim. American Ferrara sends a healthy body and moral message to young girls. My daughter and I have viewed this series​ together twice now. I believe she really identifies with Betty.
One person found this helpful
See all reviews
Back to top
Get to Know Us
Make Money with Us
Amazon Payment Products
Let Us Help You
EnglishChoose a language for shopping. United StatesChoose a country/region for shopping.
© 1996-2022, Amazon.com, Inc. or its affiliates