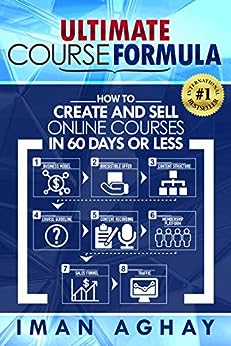 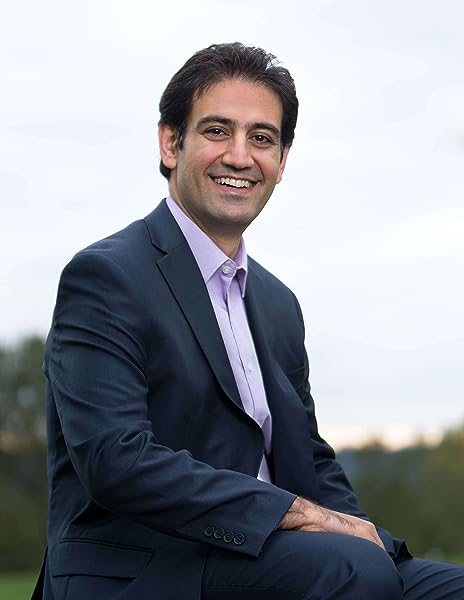 Ultimate Course Formula: How to Create and Sell Online Courses in 60 Days or Less Kindle Edition

Ultimate Course Formula is for coaches, authors, speakers, and consultants (often referred to as “experts”) who want to make a difference in the world.  This book is for people who are sharing their knowledge and expertise and want to make money by selling their content.

As Iman Aghay expertly teaches audiences around the world how to create a vital impact on our world, expand their reach and touch the lives of those who want and need to hear the message only they are meant to share, he provides a system that has led to many of his student's to incredible success.

He teaches how to write their Harmonized Business Model, how to do a specific type of market research, asking Eight Golden Questions. He then teaches his students how to structure their content structure, how to record that content and then place it on a membership platform for ease of accessibility.

In this book, and on his stages, he teaches his proven strategies:

To become an influencer in our world it is important to take a close look at how we can spread our message and expertise without the burnout and frustration.  No one can be all places nor all things to all people, but when you learn the effectiveness of the training Iman provides, your reach becomes far more effective.

Follow the proven formula Iman provides in this book, or to his audiences both small and large and you will not only save valuable time, but you will remove the frustration and disappointment due to the lack of know-how.

He is a TEDx speaker, and has spoken on the stage over 400 times in the past few years.

Iman arrived in Vancouver in 2009 with limited knowledge of English, no network, and no job. After studying some of the most successful businesses in the world, he created a marketing system that combined the most effective online and in-person strategies.

By 2010 he had founded Success Road Academy, which has become one of the largest Information Marketing Training Centers in the world. Iman has worked with over 15,000 business owners in his seminars, events, webinars, group coaching, and one on one coaching sessions. He has also founded Entrepreneurs International Network, which is a group of business networks in 5 countries with over 120,000 members. He has taught his system and helped thousands of people to build successful businesses for themselves.

4.4 out of 5 stars
4.4 out of 5
241 global ratings
How are ratings calculated?
To calculate the overall star rating and percentage breakdown by star, we don’t use a simple average. Instead, our system considers things like how recent a review is and if the reviewer bought the item on Amazon. It also analyzes reviews to verify trustworthiness.
Top reviews

Debra Conn
2.0 out of 5 stars Not helpful
Reviewed in the United States on March 17, 2020
Verified Purchase
I was loooking for how to create a course, which the book title indicates it will teach. But the author spent most of the time repeating how to use courses to get business, not how to create the course to begin with. He also wastes space reviewing what previous chapters already said and includes lots of promos for his courses. There are a few pages about 3/4 through the the book that list a few tools to use so 2 stars rather than 1.
Read more
80 people found this helpful
Helpful
Report abuse

Nancy
3.0 out of 5 stars More for consumer courses
Reviewed in the United States on July 7, 2020
Verified Purchase
Mostly a promotion for the author's course and for consumer online courses. Not sure about using the technique for B2B. Some helpful marketing tips though.
Read more
26 people found this helpful
Helpful
Report abuse

K
5.0 out of 5 stars A true step-by-step guide to Online Course Creation!
Reviewed in the United States on April 18, 2020
Verified Purchase
Wow!! This is a formulaic model to get you from idea to online course. It includes everything including how to name the course, which platforms to host it on, how to promote it, how to build credibility and how to price it! And there is a super-efficient way to figure out how to position your course as irresistible! And after reading it, it makes a ton of sense. Most people I know who have created courses and ended up having them fall flat had trouble because they started from the wrong place - at creating the course - and it wasn't "irresistible" to potential clients. This model shows you how to make 100% sure the course will sell before you even start creating it. Much smarter approach. This book is very well done by one of the foremost experts in online course creation.
Read more
12 people found this helpful
Helpful
Report abuse

JulianHt
5.0 out of 5 stars The best book about course creation
Reviewed in the United States on May 30, 2020
Verified Purchase
I am trying to create an online course and I have been buying some Kindle books about it. The Ultimate Course Formula is by far the best of the several books I have read so far. I wish I could take his course to create my own online course. Too bad that his full course is too expensive for me.
Read more
11 people found this helpful
Helpful
Report abuse

John McFall
5.0 out of 5 stars Very Comprehensive
Reviewed in the United States on September 23, 2020
Verified Purchase
I can’t believe that I paid a dollar for this book. I read through it the first time in one setting and starting today I’m going through it step by step to build my first course. It says 60 days to get your course sold... I’ll update in 60 days to let you know how I did.
Read more
8 people found this helpful
Helpful
Report abuse

Kathleen Kent
5.0 out of 5 stars This is great!
Reviewed in the United States on April 17, 2020
Verified Purchase
Part of starting an online business is having the right gear and equipment to make your presentations look professional. Excellent reference material to help you sell your goods online.
Read more
8 people found this helpful
Helpful
Report abuse

siraj
5.0 out of 5 stars Amazing book
Reviewed in the United States on December 1, 2019
Verified Purchase
Its really amazing book ( its like course ) a lot of information and tools that you can implement in real life
Read more
6 people found this helpful
Helpful
Report abuse

John M.
5.0 out of 5 stars A MUST BUY !!!
Reviewed in the United Kingdom on December 28, 2020
Verified Purchase
Don’t normally write reviews for products I buy but I felt duty bound to write one for this book as it is a must read book for anyone starting an online business not just for courses and coaching but all online businesses it offers a easy to follow step-by-step blueprint on how to start your business and gives amazing advice starting a business has inspired me to start my online business in 2021 thanks a million Iman !!!
Read more
3 people found this helpful
Report abuse

Unknown
5.0 out of 5 stars Amazing book
Reviewed in the United Kingdom on January 30, 2021
Verified Purchase
I’m about to start my business because this book helps a lot.
Read more
2 people found this helpful
Report abuse

Erik
5.0 out of 5 stars The Process Worked For Me
Reviewed in Canada on May 30, 2020
Verified Purchase
This book really lays out not only how to create a course, but how to sell it before it even is created. I just made 16k by following the process to a T. Other reviews complain there’s not enough detail, and there are references to the online course. Well if you need to take an online course for more support then doesn’t that back up exactly the same philosophy you want your future students to take? Even if you have to buy the online course to figure this out that is a more than fair investment for the ROI.
Read more
One person found this helpful
Report abuse

Lise Gaudreault
5.0 out of 5 stars Outstanding book!!!
Reviewed in Canada on April 17, 2020
Verified Purchase
WOW! I was very impressed with this book. It's like Mr. Aghay has given us all his secrets for success. I especially love "Iman's 8 Golden Questions" regarding our niche or target market. This book is full of insights into developing a very successful business. It actually gives us concrete examples of what to do and what to say. This is a fabulous book and a must for creating success!!!
Read more
One person found this helpful
Report abuse

Simon M.
1.0 out of 5 stars Horrible and exhausting to read
Reviewed in Germany on July 25, 2021
Verified Purchase
This book delivers some helpful tips.
But I have the strong feeling that it is only a transcription of a recorded audio/video.

Want some samples?
-----
"One of the greatest things that my students learn from my program is that, with every course that I teach, at the end of every class, I give people specific homework."
"When you give people a supportive environment to belong to, when you give people a better mindest to belong to, the ones who want to get results, the ones who care about getting results, will lean on that family. "
-----
No book author would write sentences which sound like agonal gasp. Sentences like these occur only in speech.
Dear Iman, if you want to write a book, then please w r i t e it.

6% of the 129 pages in total are used to place user testimonials for Iman's own course program. They have nothing to do with the chapter's contents.
Read more
Report abuse
See all reviews