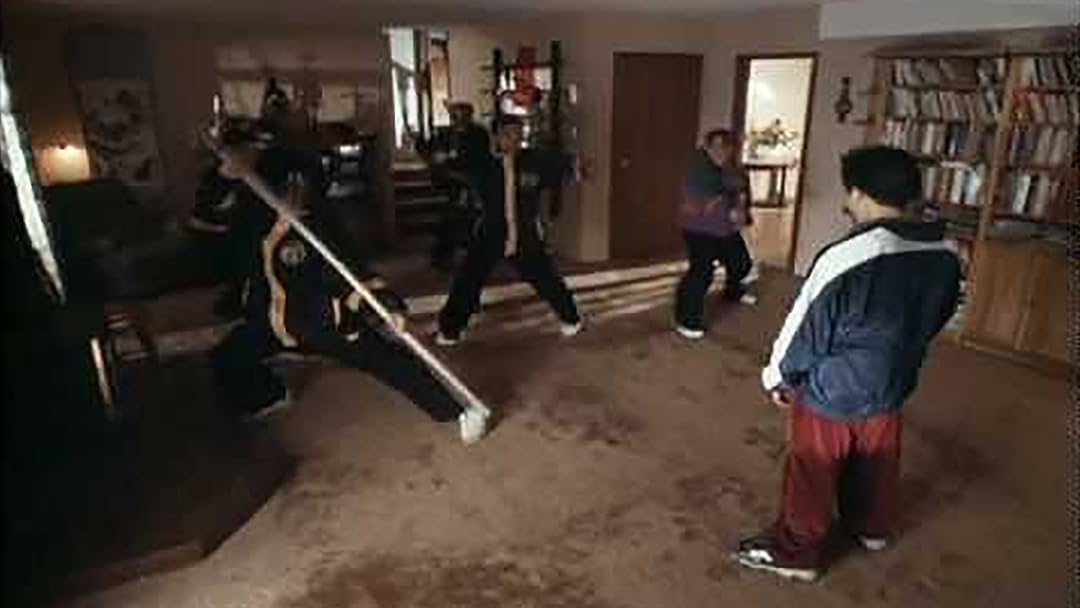 (21)
1 h 30 min2004R
When martial arts champion Pinoy travels to America, his fighting skills are put to the test when he is forced into sudden street combat against fierce members of the Crazy Dragons gang. Pinoy saves the life of Jesse. Their friendship is put to the test when the two must protect what they cherish the most and summon all their martial arts strength for an action packed ultimate fight to the death.

Frank DogheartyReviewed in the United States on May 22, 2021
2.0 out of 5 stars
Kinda old school
Verified purchase
If you don't mind watching stuff like this from the 1970s, you might like this. In a way, I did. The fight scenes were obviously faked, but the athletic abilities were still displayed and I prefer to watch such things over overstimulation.

The only reason why I am not giving this three stars is because of the idiotic H*tler theme... That was absolutely moronic and out-of-place. In fact, that's probably the reason why a few of my fellow viewers thought this was so bad it was good...

R Sam McGeeReviewed in the United States on July 16, 2021
1.0 out of 5 stars
Sad! Way too much F--word used and No story line Never got past the first 10 minutes
Verified purchase
We have the Hero Winning his match and decides to come to America where he happens to decide to get walk in a Strange Neighborhood. next we see Ernie Jr. dealing drugs and ripping off people . So the start fighting him and his foul mouth. Next we see a Kid asking our Hero for help No real story line and Poor acting Especially on the part of Ernie Jr
. with so much foul mothing I had to stop watching it.
This movie sends Martial Arts Movies way back to the 60's

Tina ClaytonReviewed in the United States on June 24, 2015
3.0 out of 5 stars
I love the Ernies and WCMA but this is just horrible showcase of anything other amazing TALENT
Verified purchase
Normally i'd be massively peeved by people trashing The Ernies. I LOVE Surf Ninjas. However. this movie honestly made me cringe, it wasnt the movie. it was the script. Ernie suddenly turning into this fouth mouthed kid surprised me. i spent the entire movie entertaining myself with "bleep" over every curse and woke up with my laptop on replay on the beginning. I did watch it through without boring myself to sleep because I LOVE the Ernies and their school. Action was astounding. no wires there baby. but the rest of it not so much.

So yeah i want to give it a 5 star because i love the action and the Ernies. Then i want to give it 1 star because its HORRIBLE - i give it 3- Ernie is amazing at his martial arts they all are, and thats honestly WHY i bought it. I didn't expect it to be awesome, i knew ernie kicked butt so i bought it. it did what i wanted it to do, showed an amazing talent. but the fact that i cant watch it again because of the cursing and story being so bad keeps it from being a 5 star

if you LOVE action. watch this on mute. no subtitles. then it will a FIVE STAR movie. ONLY THEN

James E. AddisonReviewed in the United States on June 6, 2021
1.0 out of 5 stars
Bla, bla, bla...
Verified purchase
1 star: couldn't watch more than 15 minutes. Unwatchable!
2 star: jumped my way to the end for the ending. Unwatchable, but interested in how this turd ended.
3 star: watched it all, but not happy about it. Nothing better to do.
4 star: I watched it, liked it well enough. Would never watch it again.
5 star: Great moving picture show! I'll watch it again, and maybe again in a few years.

MantisReviewed in the United States on March 2, 2009
2.0 out of 5 stars
I wish I could say that I hated this, but...
Verified purchase
This flick is so bad it's hilarious. I think it's safe to say that the majority of the humor was intentional. Ernie Reyes Jr. ("The Rundown", "Surf Ninjas") directs and stars as Jesse, a member of a group of martial artists who are at war with a group of drug dealers. Or something like that. The special features contain a trivia game about the film. Though I had little recollection of what I had just viewed, I got all dozen-or-so questions right!

Though the plot is essentially non-existent, I assume this was made as a showcase for the talented star, his father, and a couple of others. Ernie Reyes Sr. has a great (and unexplained) fight with Shishir Inocalla in the dining room during mealtime. Though most of the fights are ridiculous, they're still a lot better than many other B-films of the time. Though the crazy flying kicks do go a bit overboard. I'll also assume that Corin Nemec, who plays the flick's main bad guy, Hitler(?!?) owed someone a serious favor.

I have been a major fan of Ernie Reyes Jr. since I was a kid. This movie is probably what keeps him from getting better roles. He is not the greatest actor in the world but he's much better than a lot of the goons that pass for action stars these days and with much better moves as well. He is incredibly fast, agile, and crazy ripped. How many sit-ups does this cat do in a day? I would love to see what he could do with a real script, director, and choreographer. The trailer for his current film, "Red Canvas" looked pretty cool.

The DVD is full screened with decent picture quality. It only has a few special features, including the trivia and optional Spanish subtitles. I can't imagine that this would float a lot of people's boats, but not taken seriously it's silly and fun. If you do like this type of thing act fast, as it's out of print. 2.5 stars.

1998. aka: The Process
5 people found this helpful

darkmattrrReviewed in the United States on August 7, 2019
5.0 out of 5 stars
classic
Verified purchase
classic...

Miss_tell_allReviewed in the United States on July 20, 2012
1.0 out of 5 stars
Just bad... awful!
Verified purchase
Movie contains a bunch of Filipinos and people whose lines contains the "F" word in every sentence. There was no story. Action sequences are awful.
3 people found this helpful
See all reviews
Back to top
Get to Know Us
Make Money with Us
Amazon Payment Products
Let Us Help You
EnglishChoose a language for shopping. United StatesChoose a country/region for shopping.
© 1996-2021, Amazon.com, Inc. or its affiliates