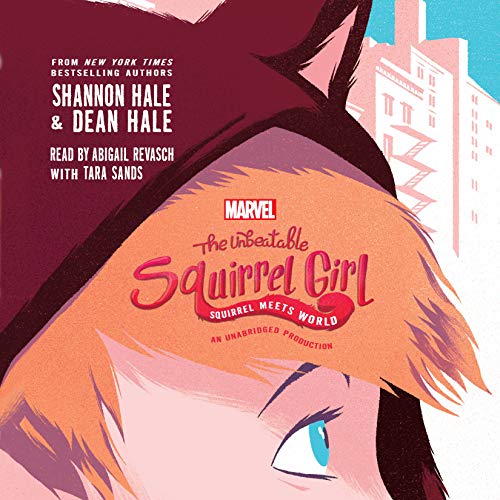 List Price: $32.20
You Save: $4.02 (12%)
By completing your purchase, you agree to Audible’s Conditions Of Use
Sold and delivered by Audible, an Amazon company
Share

4.7 out of 5 stars
4.7 out of 5
246 global ratings
How are ratings calculated?
To calculate the overall star rating and percentage breakdown by star, we don’t use a simple average. Instead, our system considers things like how recent a review is and if the reviewer bought the item on Amazon. It also analyzes reviews to verify trustworthiness.

Ellie
5.0 out of 5 stars Entertaining enough for adult fans of Squirrel Girl. More like literary crack cocaine for the younger set.
Reviewed in the United States on February 17, 2017
Verified Purchase
As a big fan of the current comics incarnation of Squirrel Girl, Amazon recommended this to me, so I figured I'd give it a shot and pass it along to my daughter.

I enjoyed it well enough. The writing isn't as funny as Ryan North, but there are definitely entertaining moments and the story moves along nicely. As a parent sharing the book with a kid, it's nice to see a teenager who actually loves and respects her parents along with parents who want to protect their daughter, but also respect her growing autonomy and encourage her to do the right thing even if it's not safe. Also, what I love about Doreen in both this book and the comics is that she always tries to understand other people first before the punching starts. Sometimes it works, sometimes it doesn't, but she always remains sympathetic and believes the best of others.

So then I gave it to my daughter who is in 2nd grade, but reads well above her grade level. She read through the book in an afternoon and declared it "so cool and funny". She had not previously expressed much interest in Squirrel Girl and had not read any of the comic books that I have. The next day, she read this book again. Twice.

I gave her the first of the comic TPB's, which she read, but did not get super excited about. So I don't know if it's the age difference between Squirrel Girl in this book and the comics, the somewhat more accessible (and less referential) writing style, or what, but this book apparently really works for her. Any follow-up Squirrel Girl books from the Hales will be instant purchases and I'm definitely going to check out their other books as well.
Read more
35 people found this helpful
Helpful
Report abuse

shauna
4.0 out of 5 stars Squirrel Girl is Awesome!
Reviewed in the United States on April 11, 2017
Verified Purchase
I knew just a little about SG going into purchasing this book, but I've read many other books by Shannon Hale, and I was not disappointed. You don't have to know everything about the Marvel Universe before reading this book. I'm a grown woman and I enjoyed it, but it would also be a great choice for young readers maybe 12 and up. Doreen (SG) is optimistic, enthusiastic, and adorable. It's very clean and you don't have to worry about any swears at all, other than maybe squirrel swears. I chuckled especially over SG's interactions with the other Marvel Universe characters. Would recommend!
Read more
14 people found this helpful
Helpful
Report abuse

Steff
5.0 out of 5 stars This book was a joy for my daughter and I both and I recommend it!
Reviewed in the United States on January 3, 2021
Verified Purchase
This is such a spunky, cute, funny, and entertaining book. I read it to my daughter and my daughter and I both enjoyed it! I ain't love squirrel girl character and now my daughter is 2nd generation that loves squirrel girl character and I'm glad that the author wrote the story it was very entertaining for her and it was good to get my daughter away from the TV and open her mind and to the more imagination and her mind which is really need! This book was definitely too difficult for her to read on her own but I was able to read it to her for her to enjoy and I do I think that it's mostly for teenagers in junior high or middle school. Or maybe a child Us in fifth or sixth grade depending on how well they're reading is. It's not super difficult but my daughter has dyslexia, as do I and it can be a bit tricky. But I'm very proud of her she did read some sentences out of there and you know she's making strides and this is a neat book to help encourage her to keep going keep trying.
Read more
Helpful
Report abuse

Nicole S. -- YA Author and Book Blogger
4.0 out of 5 stars So much fun.
Reviewed in the United States on June 26, 2017
Verified Purchase
Although often viewed as a joke, Squirrel Girl is easily one of Marvel's characters simply because of how fun she is. With that said, when I heard she'd be getting her own YA novel, I was thrilled and pre-ordered it immediately and I'm so glad that I did. What both Shannon & Dean have managed to craft here is a fun book. It's hard not to smile as you read along. The tone is light, as is expected in a Squirrel Girl story, and yet totally captivating.

For me, Squirrel Girl is one of those characters that deserves more love from readers, and this book proves exactly why -- she goes against the norm. Not only is she a girl with a squirrel tail (and teeth) as well as the abilities to match it, but she's also an optimistic hero.

Sure, the story is predictable at times. However, this is a middle grade novel, so that's to be expected. And yet, even though the entire villain plot-line in this book is predictable, it's such a fun part of the book. The villain is over the top and beyond stereotypical, but it works in this case, because he's the opposite of Squirrel Girl. Seeing the two of them go at it, struggling to understand one another? It's just fun to read.

With Shannon Hale having already confirmed a sequel, I can't wait to see what else they have in store for Doreen and Tippy Toe.
Read more
2 people found this helpful
Helpful
Report abuse

Jamie and Heather Hejduk
TOP 1000 REVIEWERVINE VOICE
5.0 out of 5 stars My 11-year-old pretty much never stopped giggling
Reviewed in the United States on April 12, 2018
Verified Purchase
Squirrel Meets World is the first of The Unbeatable Squirrel Girl books. It is funny, exciting, and just plain fun. I read it aloud to my 9- and 11-year-old sons (and my husband and 18-year-old daughter usually joined us, too). My 11-year-old pretty much never stopped giggling. The chapters are told from various points of view and have endnotes that are Doreen’s thoughts as she reads along with us. I highly recommend reading this book. It makes a most excellent family read aloud!
Read more
4 people found this helpful
Helpful
Report abuse

Viridian Arc
5.0 out of 5 stars Squirreltastic!
Reviewed in the United States on April 9, 2017
Verified Purchase
I may be outside of the YA target range, but dang did I enjoy this. It was just so dang peppy!

Sticklers for Marvel canon may HMPH at some of it since it is very much its own continuity. Newcomers should be able to slide easy enough into it, so long as you at least know the movies and have at least culturally absorbed basic facts on other Marvel books.

But yeah, I didn't know what to expect from this book, but I ended up loving up. Here's hoping the writing team churns out another nutty adventure in the future! They did a great job making Squirrel Girl feel strong and a bit vulnerable at the same time, the part with the people turning on her online legit gave me the sads.

But yeah, if you like Squirrel Girl at all, I'd give it a read.
Read more
7 people found this helpful
Helpful
Report abuse
See all reviews