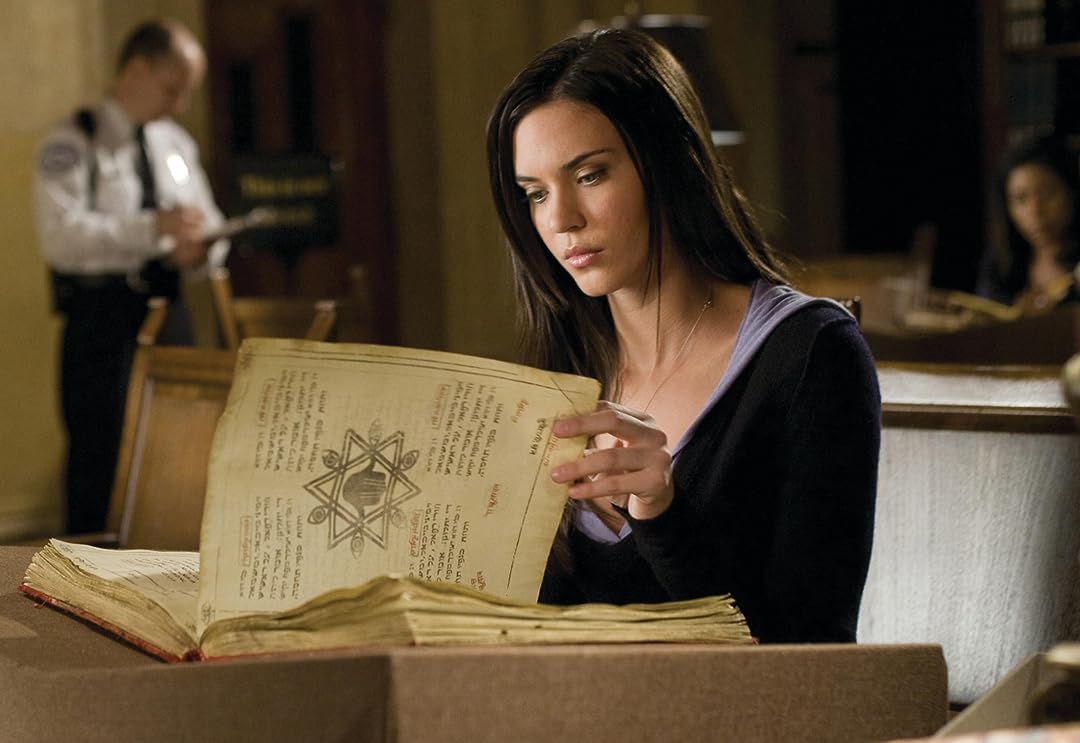 (593)
4.81 h 28 min2009X-RayPG-13
Enter a world of unrelenting evil as terror finds a new form in this shocking supernatural thriller from the co-writer of The Dark Knight.

Sydna MageeReviewed in the United States on October 1, 2021
1.0 out of 5 stars
NOT for me!
Verified purchase
Sorta a cross between the exorcist and rosemary's baby. Don't like playing with evil or putting it in my head. Once in you can never get it out. I wouldn't watch if I were you. And the acting is all that great.
7 people found this helpful

OneTasteReviewed in the United States on May 18, 2020
2.0 out of 5 stars
NOT THE EXORCIST !
Verified purchase
I was in the mood for a good scare. A good jolt to the heart. An electrocution to the nerves. Something along the lines of what I experienced when watching The Exorcist, treats ago.

In fact, I clicked on the purchase button for that very reason! Because one reviewer compared this film to The Exorcist! Another claimed that being a scary movie expert, having watched scary movies for over twenty-something years, that this one truly scared him. Even desturbed him psychologically. I was sold.

It wasn't that AT ALL!

Not only was I NOT jolted to my core, I wasn't even drawn into the story-line to begin with! I want pulled into the plot! I even found myself, at times, looking for a good book on my tablet.

The acting was good. The special effects were good. The premise of the story had potential. There was just something missing. If this had been a meal, it's ingredients and their mixture made for a very bland taste. I thought I was going to get spicy, something that would make sweat beads form below my hairline, but nothing of the sort materialized!

Although I paused several times to go get something to drink, then a snack, I did manage to see it to its end. And that is the only reason that I am giving it three stars. It didn't lose me completely. And I think that was mostly due to the fact that Odette Annable is not all that bad looking.

I wouldn't recommend this movie because I really think that there is much better out there.

Carla DeanReviewed in the United States on October 2, 2021
1.0 out of 5 stars
Not for young people
Verified purchase
They rated this pg-13 and they wonder what is wrong with our youth. This is okay if you know that it is not Biblical and total bs. There are no ghosts and NO ONE who is a believer in Christ Jesus can be demon possessed. Jesus Christ the ONLY way, Truth, and Life. The devil is a cut off withering vine coming to a rapid end. I pray this would turn you to Jesus Christ because that is the only value it has. Same old fear the devil crap unholywood loves to push.
5 people found this helpful

NemoReviewed in the United States on September 21, 2018
3.0 out of 5 stars
Tremendous potential - film never takes off - but lead actress is wonderful!
Verified purchase
The Unborn has tremendous potential and I recommend it for any serious horror fan. There are several brilliant scenes and this could have been a classic, but the direction falters and never builds. There was a lot of jokes about this movie concerning the movie poster featuring the lead actress full length standing in front of a mirror in white panties while there is a demon boy in the mirror looking at her. Now, if you read all the interviews with Odette Yustman at the time, so reveals she was shown a pair of x-small panties and told she would be wearing those in a few scenes, as you will see her in them in the film. Getting a break in Hollywood is next to winning the lottery, so Odette lifted her chin high and did what she was told. Her career has taken off and I wish her all the best - what do I think of the overt and creepy sexism she had to go through? Terrible at every level, not the scene, but how it was presented and handled. Hollywood needs a lot more spotlights shined into dark corners to get rid of the cockroaches everywhere. Odette saves this movie and without her talented acting, this would have been a one star film.
8 people found this helpful

Richard JensenReviewed in the United States on September 21, 2021
3.0 out of 5 stars
Pretty good; better than most of what's on Prime
Verified purchase
It's pretty slow and predictable throughout. Good acting and special effects, which is worth the watch. But the story isn't particularly compelling, nor is the ending any surprise.

The director is pretty heavy-handed with basically forcing you to know what each step in the plot development is going to be. The film doesn't lead you along. Instead it clomps ahead and drags you along while pointing relentlessly at what's next. So the whole impression is clunky and plodding.

But it's not a waste of time, and if you like the genera, you'll get enough value out of it. Don't pay for it, though! Free on Prime is the only way this holds up.
2 people found this helpful

psyc0geck0Reviewed in the United States on October 31, 2021
3.0 out of 5 stars
A horror thriller that is neither bad nor great in my opinion.
Verified purchase
Without giving away to much of the plot it's your basic evil spirt wishes to born into the world movie hence the title. It's does well for itself in driving the mystery as to why and how yet fails to deliver in its own self-established lore and logic as the dybbuk entity seems to move freely from one person to another possessing it's victims regardless of their strong convictions or religious faith, with apparently no difficulty whatsoever. So it springs to mind... If it can do that why does it need to be born anyway? In the end a group tries to confront it but really fails miserably and what apparently could have been done with just two people... eh, kind of succeeds? Within the plot this evil spirt has a name, and by definition if you look up the name/word Jumby, it's an evil spirt or minor demon, certainly doesn't seem to be such being its so powerful as to kill so easily everyone that gets in its way. Even the devil himself in The Exorcist had a HELL of a time... sorry for the pun. All in all, not a bad movie, the acting and cinematics are very decent but the obvious plot holes and logic flaws could be hard to ignore. More consideration in the writing to hash out these things would have help to bring some justification in the events. Just watch it and enjoy it as a simple scare flic without having any expectations of a roller coaster, it's more of a love canal of a thrill for the horror fans out there.

Avid readerReviewed in the United States on September 7, 2021
4.0 out of 5 stars
Very effective
Verified purchase
The story is sort of like an onion, where the real jolt is in the center. Slowly, layer upon layer is un-peeled, to provide more of the story, and the back story of why it is happening. To say more would spoil the movie for some, but it is done in a very effective manner. Whether one accepts the premise is irrelevant, as it is a movie. But Casey, the main character, accepts what is happening, and she sells it to the audience.
2 people found this helpful

D. FaliseReviewed in the United States on October 24, 2021
2.0 out of 5 stars
Awful
Verified purchase
This is one of the worst movies. The main character, Casey, was annoying. Her best friend made for a crappy friend. She was always dismissive of everything Casey would tell her. Without causing any spoilers, the ending made NO sense. Not to mention why this thing was targeting twins. I don't know how it received almost 5 stars. I almost stopped watching at the very beginning but made myself continue in the hopes it would get better. Ugh...it never did.
One person found this helpful
See all reviews
Back to top
Get to Know Us
Make Money with Us
Amazon Payment Products
Let Us Help You
EnglishChoose a language for shopping. United StatesChoose a country/region for shopping.
© 1996-2021, Amazon.com, Inc. or its affiliates