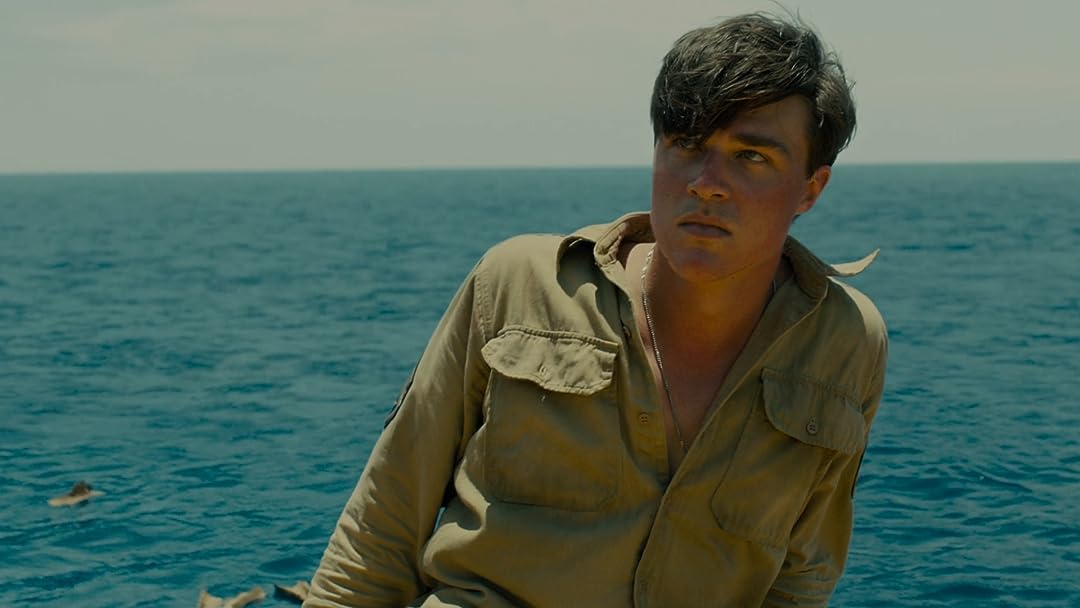 Texas RunnerReviewed in the United States on May 28, 2017
5.0 out of 5 stars
Terrific drama based on a true story
Verified purchase
This is truly a great movie! I didn't realize when I purchased it that it was based on a true story, which is why I would describe it as a great movie. Without giving too much of it away, it's about Louis Zamperini (played by Jack O'Connell), who learns about the value of forgiveness. The movie starts off with him in on assignment in a military aircraft that looses its hydraulics after being shot on assignment, but still manages to return and make an emergency landing. On a second military flight assignment, while flying over the ocean, the plane he is on stops working and crashes into the water. While this is taking place, he begins to reflect on his running accomplishments when he was a young boy. After the crash landing into the ocean, only him and two crewman survive, and are stuck at sea for 47 days before the Japanese navy find him and the one surviving crewman, and makes them POWs. He is treated horribly during the entire time he was held as a POW, but manages not to let the conditions get to him and ultimately is released along with the other POWs because the war is over. After returning to the United States, Jack gets to do what he was going to do prior to getting stranded at sea, which was run in the Olympics, which happens to be in Japan again (Japan is where the Olympics here going to be held, when he was planning on running in them). Jack being much older, this time isn't running in the Olympics competitively, but instead as an Olympic torch carrier, and demonstrates his forgiveness while there. The ending really surprised me, because I hadn't paid too much attention to what the movie was about when I originally purchased it. If you're looking for a great drama movie based on a true story, that leaves you feeling good at the end, this would be a good one to watch. Hope you enjoy it!
37 people found this helpful

emkm61Reviewed in the United States on March 28, 2016
5.0 out of 5 stars
Watch this movie!! Director Angelina Jolie did a fantastic job!
Verified purchase
After reading the book, this was truly the most accurately depicted movie based on a book I've ever seen. The movie was everything I'd hoped it would be. The only drawback for me was that it did not continue with the character's story about his coming to know Jesus as his personal Savior after several years of PTSD and alcoholism, and how his life changed after that. However, in the documentary in the "extra's" of this DVD this was heavily talked about by the character himself. So I urge you to watch all the special features and interviews after watching the movie. Allow plenty of time because this is a long movie. But you will not be bored or disappointed! Angelina Jolie did a wonderful job as director. I even believe she expressed a real acknowledgement of the power of Jesus Christ as something much bigger than what we see in Louis Zamprrini's life during her interview. It looked as though she was deeply moved as she spoke of the faith and power in this mans life, because of his faith in Jehovah God. I pray she will accept Jesus as her personal Savior as well, along with many others while there is still time!
43 people found this helpful

Child of GodReviewed in the United States on June 14, 2018
3.0 out of 5 stars
Not a good picture of the real man.
Verified purchase
The movie was interesting but the movie stopped way to short of the real miracle in Louis Zamperini's life.. So Hollywood again paints a picture that elevates man ability to overcome adversity by his own strength.Louis falls apart when he gets home and almost destroys his life and family but God steps in and puts him back on the right track. I would suggest that you read a book about him if you are interested in the real story. A good children book about Louis Zamperini is writen By Janet and Geoff Benge.
22 people found this helpful

Grumpy GeezerReviewed in the United States on April 16, 2015
3.0 out of 5 stars
THEY FORGOT THE ENDING
Verified purchase
I read the book and so I was prepared for the extreme violence that are the base of this tale. The story was nicely transitioned from book to screen and Angela Jolie has done a really superb job in recreating the 1940's period and constructing stunning visual cinematics. The performances are generally good - although this is really a film where the events and narrative drive the overall impressions.

My only criticism is that Jolie fails to get to the ultimate point of the story and the ultimate meaning of the protagonist's life. After the war the hero went home and experienced tremendous personal problems, including alcoholism, until he found religious faith and embraced forgiveness as the cure to his emotional pain and suffering. There are brief references to this metamorphosis at the film's conclusion, but removing them from the dramatic telling of the story just flat out misses the point. It is this ultimate evolution to a loving, forgiving human being that is the foundation for his becoming and remaining Unbroken.

Perhaps it is Hollywood's discomfort with religion that caused Jolie to de-emphasize this element of the tale. But it is a mistake that make the film a bit depressing. A few less beatings and a little more redemption would have made this a more uplifting film.

Bella DonnaReviewed in the United States on February 23, 2019
2.0 out of 5 stars
A Movie about survival and torture
Verified purchase
It was an interesting life story. What I didn't like is that none of the characters evolved/changed for the better/ in any way as the movie progressed. The main character just did a good job enduring all the hardships and torture.
Semi-spoiler warning if you read on...
Admirable: he didn't agree to say nice things about the prison camp in exchange for better circumstances. The most interesting part was when they were stranded on the ocean for several weeks. But even there... I didn't understand why the least-hurt guy died - from a bad attitude? It was difficult to watch/endure the whole movie, always hoping it would get better. It never did.

Gdayd00Reviewed in the United States on March 14, 2020
5.0 out of 5 stars
Made me feel all kinds of emotions
Verified purchase
I absolutely loved this book and didn't want it to end! Almost halfway through the book I almost gave up on it. It was so very slow going to me. I just couldn't get interested in the childhood and Olympic days part of it. I found it kind of hard to believe and very long and drawl out. I decided to push through because I was almost halfway through this book so why stop now, you know? I'm so glad I didn't shelf it! This book is amazing! One of my favorites I've ever read! I just couldn't put it down! I really "felt" it and it would stick with me even after putting it down. It was heartbreaking and hard to read at times. I found myself thinking of this book throughout the day and couldn't wait to see what came next. His will to live absolutely amazed me! Very inspiring as to how strong the will to live can actually be. Amazing book!

eidiReviewed in the United States on September 30, 2015
5.0 out of 5 stars
great movie, great directing and great acting.
Verified purchase
Based on some of the reviews, I did not expect the movie to be good. I decided to get the book first and then watch the movie. I am about Chapter 8 of part 1 and, the book its great! I have not read a book this good in a while.
I remember when the trailer came out for this movie...it didn't catch my attention. I liked that it was based on a true story, but i did not do research the story, so i figured i watch it one day.
But i am surprised by this movie. Angelina Jolie did a great job directing it , i think this is one of reason why i was not too eager to see it, knowing an actor was directing but she did a great job. It would be imposible to put the whole book in the movie, it would last hours. But what she has on there, is basically a summary -- a well done one!
I also did not have great expectation for acting chops and, i think the acting was great, the guy who plays Loui, was great playing the part, as well as everyone else.
If you are on the sensiteve side, the torture scene are almost real, and I had to press the 10s forward button on my Ipad, so that is something to keep in mind if you are the sensitive side.
I did a lot of research on Louis Zamporini before I bought the book and watch the movie, I watched a lot of his interviews and Angelina as well. Then got the book and finally watched the movie. And i do not regret it!
It would have been nice to see a small scene about Louis transfomation with JesusChrist, but it is a Hollywood movie, directed by Angelina who grew up in the industry and, probably didnt want to pintpoint anything specific and remain neutral, she just wrote a note at the end "his faith helped him forgive".
I think she was blessed to have met a man like Louis Zamporini, and to have had the privilage to tell his story and I am glad Louis got to see the rough cut of his life story on his last days of life.
Louis who was a man of faith the word of The Lord became real, Louis went from glory to glory (2 Corinthians 3:16-18) and though Louis beginning were humble, he went out of this earth prosperous (Job 8:7). Very inspiring story but..... the book is still better and i would recommend to read the book.
9 people found this helpful

Mrs. DavisReviewed in the United States on June 28, 2021
5.0 out of 5 stars
An Incredible Story of Survival and Determination
Verified purchase
My son had to read this book for 8th grade ELA. The book was so interesting that he asked us to buy the movie and our family loved it. Louie was born in nearby Olean, New York and lived an incredible life, enduring conditions most men could never survive, and it may be because of his Olympic training and definitely due to his determination. Very accurate in terms of matching facts in the book, AND director Angelina Jolie was in constant contact with Louie to ensure the film accurately portrayed his life. Watch this movie and read the book. You won’t be disappointed.
See all reviews
Back to top
Get to Know Us
Make Money with Us
Amazon Payment Products
Let Us Help You
EnglishChoose a language for shopping. United StatesChoose a country/region for shopping.
© 1996-2021, Amazon.com, Inc. or its affiliates